In the tangled green smell of trees and dirt, the cracking snaps of twigs and the chirps of robins and neighborhood children running through Kirk Park, students dug, planted and pulled at the expansive roots and shoots alongside Onondaga Creek in an effort to spread their message of making the world a better place for people, animals and the environment.

The OCCC has worked closely in the past with local groups such as the Kirk Park Association, 100 Black Men of Syracuse 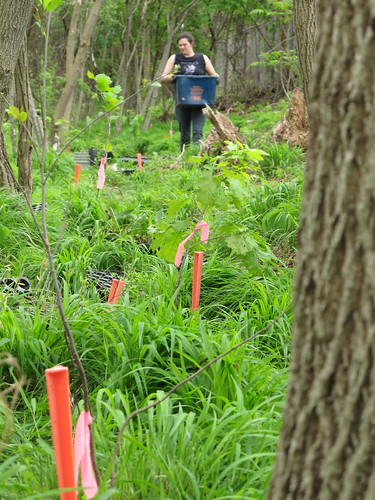 and the TechEd students from Tully to clean up and restore the creek. Dozens of marked and flagged trees planted last year by 100 Black Men and their mentees line the creekside to mark the survival rates of the plants being planted and as a testament to the growing success and efforts of the creek cleanup.

Volunteers also installed bird houses to encourage nesting. Tully’s TechEd students made and donated 32 birdhouses for the project. As it stands, invasive plants not natural to the area reduce the creek’s ecological function to encourage critters and draw animals to the creek like squirrels, birds, bees and even bats.

“The bats are a needed endangered species. They keep mosquitoes in check,” reminded volunteer Beth Morrison in what seemed like a live classroom with species, rooted plants and youth volunteers that almost never stopped moving.

The group received grant funds to purchase their soil and material but rely on the model of community-based conservation to teach neighbors and youth about plants that would marry well with not only the soil in Kirk Park but withstand the temperatures and occasional floods of the creek.

“We’re experimenting to see which set of trees will work better with the park. It’s a long scientific process to maximize restoration to the area,” Smith explained.

Planting Sycamore and Oak trees, which grow quickly and provide mass to draw animals, are examples of how the right trees and vegetation can draw desirable attention and beautification to the creekside.

“You always have your mind on the different area species and animals to try to be considerate of how to make this space usable for everyone,” she added.

The Science of Making the Creek Beautiful 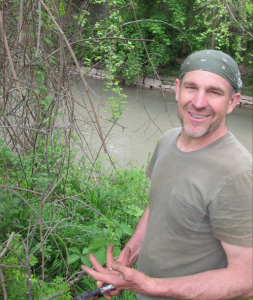 For our creek, the desirable width of a buffer zone is often not possible due to roads, buildings and nearby homes. To allow certain corridors to be functional and beautiful, the creek requires ongoing extensive cleanup and rehabilitation efforts. This entails removing invasive species – plants that overwhelm the natural ecology of the area such as garlic mustard seed, Norway maples (as opposed to American Maples) and Multiflora rose.

In a healthy and shaded world, Onondaga Creek would function with a vegetated buffer at least double the width of the creek on each side, according to naturalists and OCCC coordinators. It would have a swath of trees, shrubs, wild flowers and grass and tree canopy arching over the creek, providing cooling shade and leaf litter for aquatic life.

“This is where it’s important to inspire kids to get involved and feel empowered,” said wildlife videographer Wallaur. “You don’t necessarily need a degree to learn this kind of thing. Just a love for fun and nature.”

Brian Fisher, who is 19 and a freshman at Western Connecticut with the Roots & Shoots group, found the process of using local stakeholders to rehabilitate the park inspiring.

“I learn a lot about the nature stuff, but I mostly enjoy the people part of it,” said the biology and ecology major.

Other students agreed citing “I love dirt!” and “We love Bill!” as their top reasons for returning to the creek project for a second year after hearing, now Syracuse resident, Wallauer speak on community conservation.

The students also extended their learning to local students Antoine, 9; Chris, 11, and Vontelle, 7, from Meachum and McKinley Brighton elementary. They helped the group by planting their own budding trees. 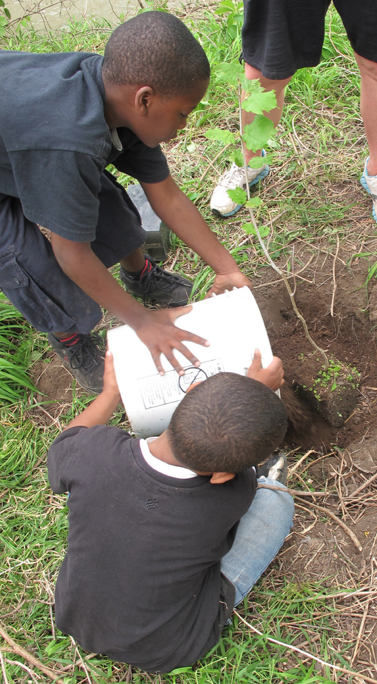 “Kids are naturals at this; they just need an opportunity to do this stuff,” said one of the volunteers as they hauled away dirt with Chris.

Carefully sidestepping flagged Pagoda Dogwood that was planted the year prior with 100 Black Men of Syracuse, volunteers focused their cleanup on: pulling away vine choking younger trees; uprooting invasive multiflora rose, which seemed to line the entire creekside, and planting then watering hundreds of wildflowers.

Sustaining the effort requires a unified task of communicating with neighbors and observing what plants they are bringing into the area, speaking with local stakeholders and governmental entities to ensure that the cleanup efforts of other groups is harmonious and considerate of the parks ecological function and most importantly green thumbed youth wanting to appreciate a healthy, shaded park. The OCCC is awaiting a separate grant to continue their cleanup as far south as Seneca Turnpike.

“What we’re doing is a doable thing,” Wallaur said.

The group’s hands-on, participatory approach has seen volunteers as young as elementary aged children and seniors as old as 72 years young.

“This is thinking global and acting local,” Smith said. “This is how you build community.”

— Story and photos by Ruthnie Angrand, The Stand Community Correspondent