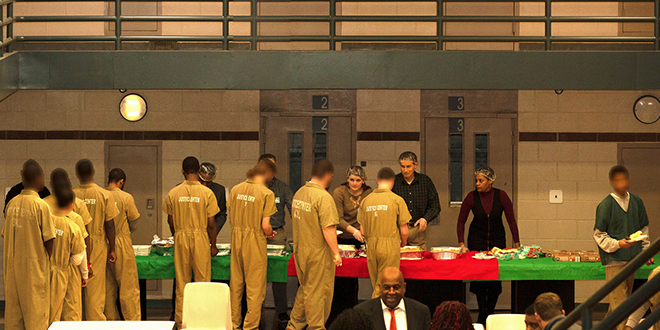 Playing keyboards at the county jail in Jamesville many years ago, Joseph Perry Jr. looked over the crowd and locked eyes with a young woman he recognized from church sitting silently by herself.

“When I looked into her eyes I almost cried,” he remembered. “She was just so sad and alone.”

That woman was Jacqueline McMullen, who said the 45 days she spent housed in the annex at the Jamesville Correctional facility “felt like 45 years.”

Now an accomplished singer, McMullen teamed up with Perry this week to play music for a group of incarcerated teenagers at the Onondaga County Justice Center.

“I remember sitting on the other side, and what a blessing it was to hear this man play, and to know someone still cared,” McMullen said. “I hope to give that blessing to someone else, to let them know it doesn’t end here.”

The performance was part of a dinner hosted by Project H.E.I.Y.P. (Helping Empower Incarcerated Young People) and also featured violinist Tasha Washington, prayer from Pastor Lateef Johnson-Kinsey, and six other volunteers serving up a feast that included roast beef, chicken, macaroni and cheese, and at least three different desserts.

“This sure beats the trays they normally give us,” said one of the teenagers, who under Justice Center requirements could not be quoted by name.

The dinner is the brainchild of Mike Atkins, a former city councilor and the director of Project H.E.I.Y.P. Several of the volunteers said they came to serve food at the event because they are inspired by Atkins and his work.

“Mike asked, and it is just an honor to be part of his team,” said Tammie Boutwell, who sometimes works with Atkins to help find jobs for people recently released from jail in her job at the Department of Labor.

Boutwell, like McMullen, had spent some time in jail and remembers being housed at the Justice Center.

“It was a long, long time ago, but you never forget,” she said. “I remember feeling that I wasn’t even in Syracuse when I was in here – it’s another world, sealed off. My heart was pounding coming in here tonight. But now it feels good being here, hopefully relieving some of the uncertainty and anxiety these kids must feel.”

Sgt. Kevin Mahoney said most of the 12 male teens housed in the unit where the dinner and performance took place were 17 years old, with a few 16 year olds who were already housed there when the law changed in October. Newly incarcerated 16 year olds are now housed at the Hillbrook Juvenile Detention Center.

Most of the boys at the center are awaiting trial or sentencing. One of the teenage inmates is being held on a murder charge, jail officials said.

“Christmas is going to be a tough, frustrating time for these children, and we want to alleviate that and let them know they are loved,” Atkins said. “Just 10 years ago, these are the children you would see riding tricycles in the neighborhood.”

Atkins and his team brought with them words of love and encouragement, but also rebuke. Pastor Johnson-Kinsey preached about the love Jesus has for them and of the strength and freedom each of the boys has inside of themselves, even if they are behind bars.

But when some of the boys started joking during one of the performances, Atkins barked at them.

“This isn’t a joke,” he said. “Your parents have to wake up on Christmas knowing their child is in jail.”

Other than that bit of laughter, though, the boys were exceptionally polite. They all smiled and thanked the volunteers serving food, going back for seconds and thirds. They listened attentively to the performances and cheered loudly at the end of each song, even asking McMullen to play “Mary Did You Know” a second time before she left. And they bowed their heads in prayer as Johnson-Kinsey preached.

One of the teenagers said the evening moved him deeply.

“It made me think a lot,” one said, “about the decisions I have made that have put me in this position.”

— By Greg Munno, Newhouse School Faculty Advisor to The Stand