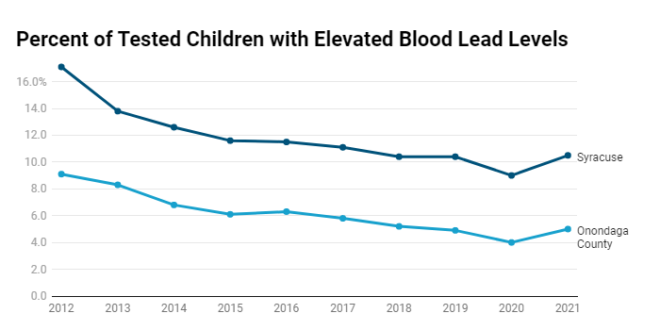 Opponents of the aquarium project want the money spent on more pressing needs, like the removal of lead paint and pipes. Lead poisoning hurts children and leads to a host of health and societal problems. It is again on the rise, according to the most recent data. | Onondaga County Health Department

Voting ‘Yes’ When They Wanted a ‘No’

Charles Garland says he has fielded many angry calls from South Side residents since voting ‘yes’ on the aquarium project. But he stands by the vote, saying it will best serve the neighborhood in the long-run.

Albert Tubbert knew from the start that the aquarium proposal would pass. That didn’t stop him from taking time off from work to give the county legislators a piece of his mind.

Tubbert was among dozens of Syracuse residents who protested the decision last week to spend $85 million to build an aquarium in Syracuse’s Inner Harbor. Tubbert and his fellow protesters said Syracuse has far too many immediate needs to spend that much money on a tourist attraction that, like many economic development projects in Syracuse’s past, may well fail to deliver its promised benefits.

The county plans to build the aquarium with surplus cash that resulted from tight-budgeting during the pandemic, federal pandemic aid and strong tax collections. County Executive Ryan McMahon pushed the project, saying the 600,000 gallon aquarium will draw 500,000 visitors a year and benefit many sectors of the local economy.

The swing vote allowing the project to pass came from South Side legislator Charles Garland. He wrangled money for a  housing project on the South Side from McMahon in exchange for his support, but angered many of his constituents in the process.

Speaking with The Stand on Monday, Garland said his “yes” vote will bring benefits to the South Side in addition to the housing project. “Now we have a seat at the table,” Garland said.

The 16th District legislator said he plans to leverage his new relationship with the county executive to push for priorities including a lead-abatement certificate program for high school students, jobs for Syracuse Build graduates, contracts for women and minority owned businesses and funds to help South Salina Street businesses restore their facades.

Opposition to the aquarium project has focused on several factors, including doubt about the aquarium’s ability to draw enough visitors and concerns about the cost of long-term upkeep. Opponents also say the money could simply be put to better use, be it for healthcare, education, new housing or replacing dangerous lead pipes and paint in existing homes.

For many residents, the Aug. 2 vote was the first time they could express their opposition to the project. They protested on Columbus Circle before the meeting and then went into legislative chambers to make their voices heard during the public comment section. Democratic lawmakers, who largely opposed the measure, tried to extend that comment period beyond the required 30 minutes. The bid to extend the comment period failed, further angering the protesters.

Tubbert was one of the few who got to speak.

The crowd jeered when Garland voted “yes” on the proposal, the only Democrat to do so. In late July, Garland said he would vote to approve the project after McMahon agreed to spend $4.5 million to build 10 houses in Garland’s South Side district. McMahon called the deal “making legislative sausage,” Syracuse.com reported.

Garland’s vote helped McMahon, a Republican, overcome three no votes from within his own party. The project passed 9-8.

Before he cast his vote, Garland urged his constituents to place their trust in him and to believe he was acting in their best interest.

“This is for the ones that know me, you know my heart, you know that I would never do anything against our interest,” Garland said during the legislative meeting. “The 10 houses is where it starts, and then it’s going to spread out from there.”

A week later, Garland stands by his vote and says he wants his constituents to know his deal with McMahon goes beyond the housing project he won for the district in negotiations with the county executive. He says he now has the leverage to win approval for future projects in his district.

One initiative he emphasized might sit well with the many protesters who thought the aquarium money would be better spent to fight the increase in lead-poisoning cases in the city, which are largely concentrated in neighborhoods like the South Side.

Garland said, for instance, that he plans to push an initiative to get graduating high schoolers lead-abatement certified. This would guarantee them jobs after graduation and ensure that they stay in the city, he said.

The legislator acknowledges he must now reconcile with his constituents after receiving many angry phone calls regarding his vote.

“None of the decisions that I made were in a vacuum,” said Garland, who added that he had consulted extensively with an advisory board for his district. “We’ve been fighting the same fight. I just went and made agreements and arrangements so that we can start getting something for our efforts.”

South Sider Deborah Preaster is one of the constituents Garland will have to win back.

“This is quid pro quo,” she said after the vote. “This is anything but the community.”

April Santana writes about the information environment in communities of color. Her work is funded by the Knight Foundation’s Combating Disinformation in Communities of Color grant and a Syracuse University SOURCE grant