Residents of Toomey Abbott Towers are taking steps toward a healthier lifestyle.

The partnership began in 2011 as a way for Upstate to leverage its resources in the underserved surrounding areas to address health disparities between those communities and others. The program started with a community garden in the Pioneer Homes community and has since expanded to Toomey Abbott and Almus Olver towers. Through the partnership, residents become resident health advocates and develop programs for their community that address health issues. 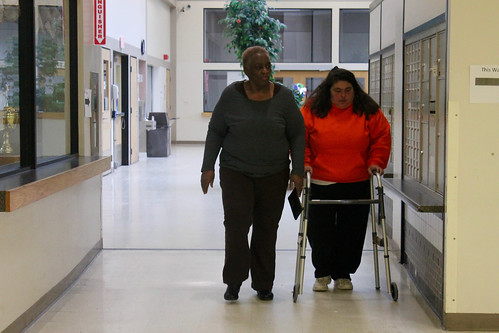 Maxine Bandoh, left, and Frances Ogilsbie walk around the plaza level of Toomey Abbott Towers. The residents participating in the walking program support each other during their workouts.

Because Toomey Abbott is a senior living facility, the resident health advocates there faced a special challenge when designing their program.

“One barrier that we face with a lot of residents is that they have different health complications,” said Aldrine Ashong-Katai, project support specialist at Upstate. “So when it comes to encouraging them to exercise, it’s something that they definitely want to be a part of, but sometimes there are limitations.

Shelia Kithcart, one of three resident health advocates there, said they distributed a survey to the residents to determine what kind of program would be most beneficial, and they received positive response for a walking program.

On Mondays, Wednesdays and Fridays, residents complete laps around the second floor of Toomey Abbott and record their distances. People using walkers and wheelchairs participate as well.

“We don’t push them too hard because it’s not about pushing you to see how far you can go,” Kithcart said. “You do it at your own pace.”

When the weather warms up, Kithcart said they’ll go outside and try to walk a mile.

As resident health advocates, Kithcart, Janet Bacon and Ron Jackson completed a 10-week training process to learn about various health topics. Among them: nutrition, diabetes and obesity. After the training, resident health advocates enter the internship portion, where they are responsible for developing programs that fit their residential community.

The program, which began in February, is in its early stages. The resident health advocates at Toomey Abbott are still working out details with facilitators from the Syracuse Housing Authority and Upstate. Ashong-Katai said they are working to incorporate medical residents into the program to take vital signs for Toomey Abbott residents, giving an indication of their fitness.

Kithcart added that they eventually want to take the residents to a gym and do simple workouts. For now, they focus on walking and making gradual changes to their diets. Kithcart said that she encourages the residents to give up one unhealthy aspect of their diets for 30 days, like soda or junk food.

“I’ve been drinking lots of water, eating healthy and that’s been working,” he said. “People come up to me and say, ‘you’re looking really good.’”

Collins sticks to seven laps each day, which is close to half a mile. On the second floor of Toomey Abbott hangs a poster-sized sheet of paper with all the participants’ names listed, along with the laps they completed on each date. Maxine Bandoh, another resident of Toomey Abbott, walks each of the three days of the program.

“I like the walking program, at my age it helps you lose weight,” she said. “I wish more people would participate.”

Kithcart said about a dozen people participate each day, but the number dips on Fridays. Some residents have weight-loss goals, but Kithcart said she wants them to focus on maintaining an active lifestyle.

“If we can encourage people to exercise, eat right and lose some weight, it wasn’t in vain,” she said.

“It builds a sense of community and camaraderie amongst residents,” he said. “They’re all part of an initiative. They’re all walking, they’re engaged and get to know one another.”