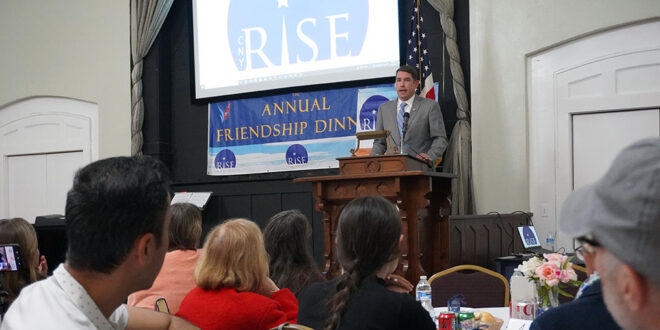 Walsh: I-81 Project Foes Would Double Down on Old Mistakes

Mayor Ben Walsh walked into a Syracuse community center on Thursday disappointed and frustrated by a court ruling earlier that day ordering a stop to the I-81 project.

Speaking at the CNY Rise Center Friendship Dinner, Walsh championed the project that has been more than a decade in the making. The project would route Interstate 81 around the city and allow for the removal of the decrepit elevated highway that runs through the heart of Syracuse.

Walsh sees the project as a chance to right old wrongs and invest in the communities that were uprooted when the highway was built in the 1960s. He added that there is no real alternative to the project, saying that rebuilding the elevated highway through the city would “double down on old mistakes” and “create further displacement of people, further disproportionate negative impacts on our communities of color.”

So, Walsh admitted he was frustrated to the Friendship Dinner guests, who unexpectedly found themselves hearing a much more timely and pressing speech just hours after a state judge ruled that work on the project should stop until she heard arguments in the  lawsuit filed against the state Department of Transportation.

“It’s been a day,” Walsh told dinner guests as he vented at “stakeholders within this community that have a lot invested in maintaining the status quo.”

The plaintiff’s include the towns of DeWitt, Salina and Tully, along with former Syracuse police chief Frank Fowler and county Legislator Charles Garland, who represents the South Side. They argue that the project planners have not accounted for the disruption, dust and traffic the construction is sure to create.

Walsh told the guests at the CNY Rise Center, who filled the main hall, that they had buoyed his spirits. Many in attendance had worked toward shaping the I-81 project, including the Friendship Dinner’s honorees, who would win citizenship awards that night for efforts related to the I-81 project.

Several other officials attended the Friendship Dinner and took their turns at the microphone, including Joe Driscoll, the city’s point person on the project, state Sen. Rachel May and state Assemblymember Pamela Hunter. Each also said they thought the project would move forward.

“These are people who are determined to build a strong, vibrant and rich  community here in Syracuse,” she said. “They embody the motto of ‘we rise by helping others.’”

Dancil, Lane, and Henderson spearheaded an effort to insist that I-81 project planners set a minimum standard that 15% of workers on the project live in Syracuse.

“The Urban Jobs Task Force advocates for economic equity,” Saka said. “Its mission is to ensure that when public dollars are spent, city residents benefit.”

CNY Rise Center also recognized Chaplin, the lead counsel for the NYCLU in Syracuse, for her advocacy on behalf of local citizens.

“She’s dedicated to working with city residents to ensure that their civil liberties are protected and that the injustices of the original construction of Interstate 81 through the city are are not repeated,” Saka said. “She has been a strong voice for health and social justice.”