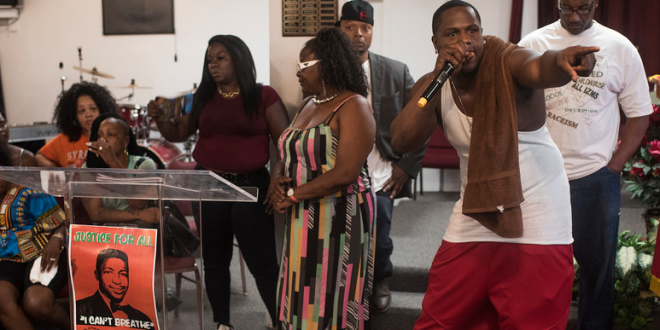 A man, who did not provide his name, voiced his anger during Tuesday night's National Action Network meeting. | Ben Cleeton

Where Do We Go From Here?

While the community reels as facts continue to come to light, one sentiment is widely felt: what we’ve been doing is not working. Change is needed.

Speaking to various community leaders and residents, The Stand sought to see how residents can best process recent events.

When gunfire broke out after 11 p.m. Sunday at an annual Father’s Day Cookout near Skiddy Park, Gary Porter, who also went by the name Terry Maddox, was shot and killed. Police say at least four guns were fired, including one by officer Kelsey Francemone. Many details are still unclear. Recently released footage shows a chaotic scene, and initial reports over the police scanner described more than 300 people in attendance. In the surveillance footage, Francemone is seen running against the fleeing crowd but goes off frame, toward the direction where Maddox was shot. A ballistics report has yet to be released, so it is unknown at this time if her bullet is the one that hit Maddox.

“Justice is slow,” said Billue, who is president of the NAN Syracuse Chapter. “We must stay the course; we must be committed.” She invited everyone to return Saturday to strategize next steps.

In addition to complaints about police response that night, one major issue emerged: how no public official came forward explaining to residents, who may have suffered a trauma, how to seek help, especially for youth.

Many mothers shared Tuesday evening that the following morning their children were afraid to leave the house. Why? Because armed police in military-style gear were outside their door.

“I think the mayor could have made a statement addressing this,” said Lawrence Williams, director of Syracuse Save Our Youth. “No one in power came forward to offer counseling or avenues to find assistance for residents who they are supposed to be representing.”

Lawrence said he plans to attend Saturday’s NAN planning meeting because as a South Side resident, he wants the community to be heard.

Thursday afternoon, he recognized that feelings of anger are justified, but the community needs to fuel their emotions and energy productively.

“We can’t say end the police,” he began, “because we pay the police. We must demand that they work for us … demand in constructive ways.” 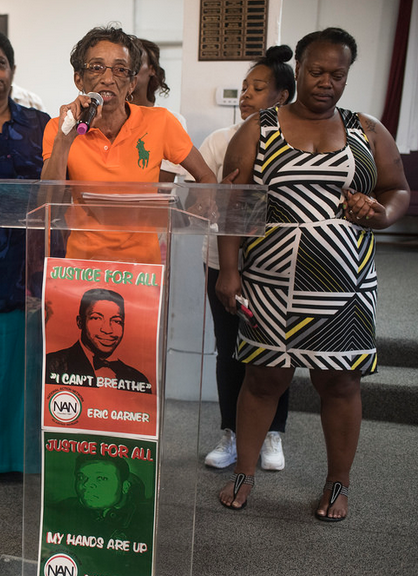 A planning session is set for this Saturday open to all that want to unite and devise a plan of action. The meeting will begin at 10 a.m. at the Fountain of Life Church, located at 700 South Ave. Attendees are asked to wear orange in support of June being Gun Violence Awareness Month.

New Citizen Review Board administrator David Chaplin II, who is in his second week on the job, was asked to attend the NAN meeting. He declined.

“There was strong interest by organizers for having the CRB present,” he noted. “But I made a judgment call based on the current climate. With an active lawsuit and a chance the law department potentially sanctioning us for acting unilaterally without a formal complaint being filed, I had to make a tough call.”

His decision, he said, was to remain objective and maintain accountability of the CRB’s process as a city agency. The CRB did send a representative, Caleb Duncan, who is both a member of the CRB and NAN, to provide the option of filing a complaint.

Chaplin said one person has come to his office to file a formal complaint about Sunday’s incident and paperwork for about six more complainants has trickled in throughout the week. The mission of the CRB is to respond to citizens complaints against the Syracuse Police Department. A complaint must be made using the CRB form and signed for it to next go through the review process and launch an investigation. Making a complaint on social media — while a public forum — does not currently qualify as a formal complaint. Chaplin says ways to utilize social media and ease the process with current technology is something he does what to pursue in the future.

Former CRB administrator Joseph Lipari agreed that it was probably best for Chaplin not to attend Tuesday’s meeting, noting there is a fine line in perception. It is one thing to visit NAN members or any other community group to offer an informational session on the CRB, but another to attend a meeting charged with a specific agenda.

Lipari added though, he thinks the NAN meeting was needed and created a safe venue for residents to vent their emotions. “And having that can be very healthy,” he said.

The CRB’s civilian oversight process works to hold those in power accountable and the process takes time. “It requires great persistence and patience,” Lipari said.

Timothy “Noble” Jennings-Bey, director of the Trauma Response Team, responds to neighborhood killings and provides support to the victim’s family. He did not show up Sunday night.

Jennings-Bey said while he did get a call about the incident, at that time, it was not reported as a homicide, so the TRT did not arrive. He also did not attend Tuesday’s NAN meeting.

“Anger without discipline is fruitless,” Jennings-Bey said. “And to wait on the facts, takes a certain level of discipline.”

While he continues his day to day work of fighting community violence, he said there are layers to the issue’s heart.

“It’s layers of filth,” he said. “And both sides are filthy.”

The police seek assistance in identifying men with guns in the video released Thursday. Call 442-5222 with tips. All calls will be kept confidential. Anonymous tips may also be submitted using the “SPD Tips” App.

If you are not comfortable contacting the police, you may contact Yusuf Abdul-Qadir, chapter director for the New York Civil Liberties Union, at (315) 471-2821 or yabdulqadir@nyclu.org. Witnesses or complainants may contact the NYCLU without fear of retaliation.

If you have a complaint to file against the police, you may contact the Citizen Review Board Administrator David Chaplin at (315) 448-8750, email dchaplin@syrgov.net or in person by visiting the CRB office at 201 E. Washington St., Suite 705. The CRB’s mission is to assess the validity of police misconduct complaints, to recommend appropriate discipline to Syracuse Police Chief Frank Fowler and to report its findings to the public.

If you or a family member need counseling or support for trauma, free therapy services are available by Syracuse University’s Couple and Family Therapy Center, located in Peck Hall at 601 E. Genesee St. Services are offered from 9 a.m. to 8 p.m. Monday through Thursdays and 9 a.m. to 4 p.m. Fridays. The center is closed for lunch from noon to 1 p.m. daily. To make an appointment, call (315) 443-3023.

— By Ashley Kang, The Stand director; if you have an event or resource to share, email ashley@mysouthsidestand.com