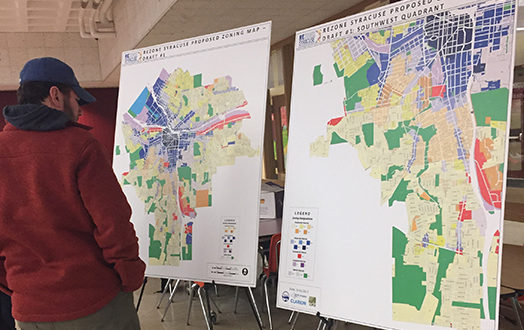 The ReZone Syracuse project team presented the first draft of its new city zoning map at a public meeting in February.

City officials, private consultants and the neighborhood representative were present at Corcoran High School on Feb. 15 to give a brief overview of the project and hear from local residents from the Southwest quadrant of the city. The project team also gave presentations several times in different parts of the city.

The new zoning map comes with the arrival of a draft for a new city Zoning Ordinance, which was last updated 50 years ago — in 1967. This two-pronged ReZone Syracuse project is a city-led effort to update the city’s zoning codes to facilitate the implementation of the Syracuse Land Use and Development Program 2040.

“It’s going to update our zoning code,” said Owen Kerney, project manager for ReZone Syracuse. “So anybody that interacts with the zoning code or uses it would be using a more streamlined, more focused and clear document.”

The primary objective of the ReZone Syracuse project is to make Syracuse an attractive destination. The new zoning districts and map would make neighborhoods more attractive through high-quality design and environmentally sustainable means. The updated zoning districts also would make the process of doing business easier. Kerney pointed out in his presentation that the old ordinance and map had run their course and that it was time for a comprehensive evaluation.

ReZone Syracuse was initiated in fall 2015, funded partly by a $300,000 New York state grant. The city hired a team of experts — Clarion Associates, who work on zoning updates on a national scale, and Environmental Design & Research, a local firm — to plan and implement the project

Susan Boyle, common councilor for District 3, said that residents and business developers want their voices to be heard in this current drafting process. “Ideally it’s supposed to be easy for everyone,” she said.

Around 20 people attended the meeting at Corcoran High School as the team presented the first module in the drafting process of ReZone Syracuse. Boyle opened by giving a short overview of the project and then introduced Kerney, who gave his presentation.

A question-and-answer session followed. Audience members asked questions about the regulation of corner stores, vacant lots and the extent of the zoning ordinance’s jurisdiction.

Jovan Collins, a resident of West Colvin Street, said she liked the fact that people are coming together in her neighborhood to talk about this project. She said that the neighborhood has to be continuously involved during this drafting process. Module 1, as explained by Kerney, lists the proposed new zoning districts and an addition of new land uses, such as microbrewery and artisan manufacturing. 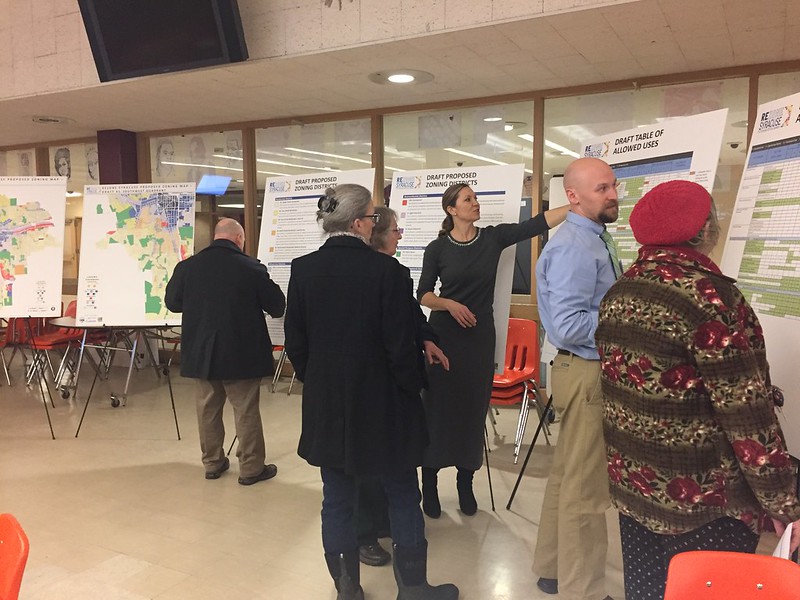 “Right now our uses are limited,” he said. “They’re dated. They’re old, and so this is expanding and looking at new uses that maybe weren’t anticipated or contemplated back in the ’60s when we last did this.”

The new zoning districts feature five new mixed-use districts, which are designated areas that can be used for a variety of purposes, such as an urban neighborhood and a central business district.

Kerney made it clear, in an interview, that zoning would have a limited effect on sidewalks, sewers etc., which would be the focus of public works. Zoning focuses on the use of private land, he said. “Not on our streets, but on our private property,” he clarified.

A major component of the project is streamlining the process of zoning itself. Both Boyle and Kerney stressed that making the approval and review process more efficient would benefit homeowners and business developers.

John Sexton, a facilitator for South Side Tomorrow’s Neighborhoods Today, who has been involved with the group for the past few years, said this was a big effort that would give the city “more control in what kind of businesses go where and what they’re going to look like.” He added that change would come slowly as a result of the project.

Kerney, too, mentioned that the changes would not be immediate. He hopes to have the drafting process completed by the end of this year and — with the Common Council’s approval — have it take effect by early next year. The changes would be incremental as new businesses come in, new permits are issued and new rules are applied, Kerney said.

“Over the next few years, the new changes would start to reflect visually,” he said. 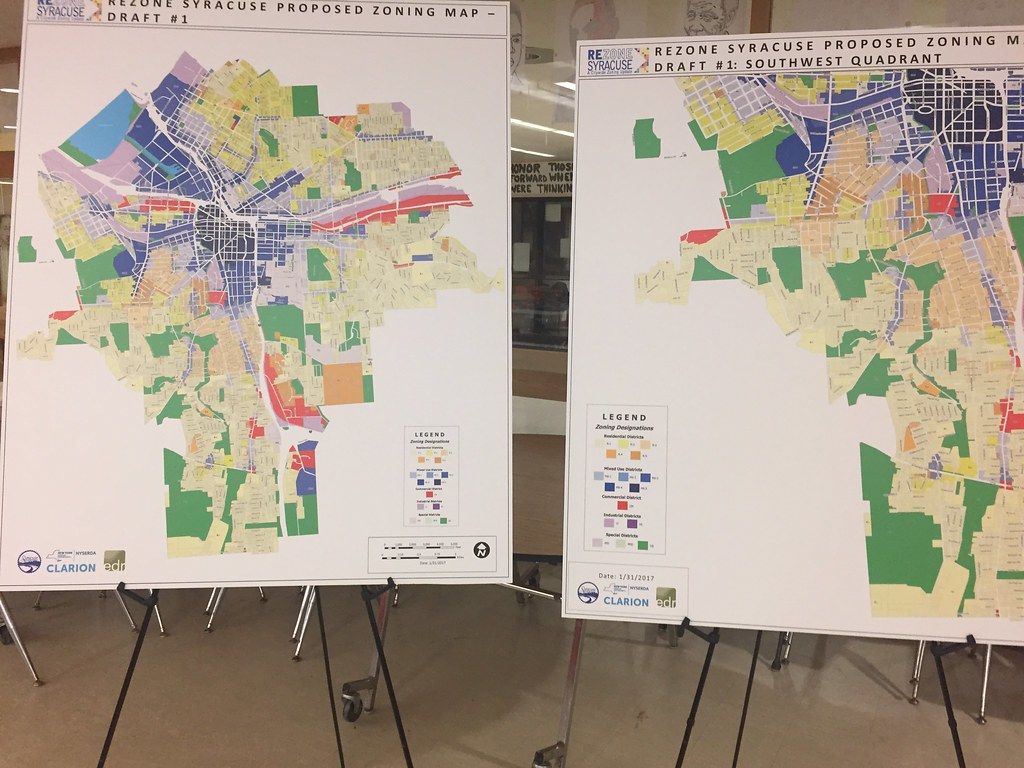 Proposed zoning maps are on display during a ReZone Syracuse public meeting.