Ashley Noel was sitting beside her mother in the red pews of the church she grew up in but had left for years. She never expected what happened to her one Sunday morning during service. The pastor called her out to come before the congregation.

“I was so shocked I didn’t know what to say,” Noel recalled. But then, in front of hundreds of other believers, he told her that she was sitting on a gift and he wanted her to use it.

Nervous and shaking in front of the microphone, she stood before the audience with the pastor and his wife, now standing next to her. He wanted her to sing. To sing any song that came to her heart. So using the words of Beverly Crawford, she revealed her gift and sang “Inhabit My Praise.”

Noel says the experience changed her life’s mission, and she credits her pastor for her growth. 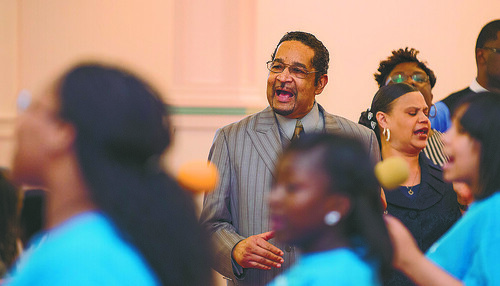 “He has taught me the importance of not just being able to sing, but also the ministry behind it,” she said. And since then, she added, he calls her one of his daughters.

Pastor David Tanyhill Jr. has been at the Bellegrove Missionary Baptist Church for 15 years, overseeing a growing congregation that gathers in a new worship sanctuary.

Youth is his top priority.

When he was only 9, Tanyhill’s father walked out on him. His mother raised him to go to church and put his faith in the Lord, but he says he followed a different path in his teen years to manhood. He wanted nice clothes and a new car, and never had a strong male role model to show him the proper way to get the things he wanted out of life. It wasn’t until he was 18 and joined the military that he pulled through his rebellious stage and began to accept his higher calling.

“I never wanted to see another kid go through what I went through to make it in life so I became a father figure for all kids,” he said.

More than 23 million children in the country live in single-parent households, according to the U.S. Census Bureau. That same data reveals that nearly 75 percent of African-American children live without their father in the home.

After Tanyhill initially settled in as pastor of the church, he knew he wanted to build a youth program. He had the idea for project HOPE, which stands for Help Our People Excel. Little did he know that Syracuse Police Chief Frank Fowler (then an officer) was listening and was a member of the congregation. Wheels turned, and within a few years a summer camp was a reality, serving nearly 300 children between the ages of 7 and 17 from the time school recesses until two weeks before the New York State Fair opens.

“Part of the program is that they must have holistic rehabilitation processes, which means that faith has to be involved in it,” Tanyhill said. “We teach them that there is a higher power and you need to be able to reach out to God.”

Noel was a member in the beginning stages of the youth program before she had to move away to Nashville, Tenn., to take care of her ailing grandmother. When she returned at the end of her teen years, she found herself as more of a spectator during worship and at other activities until the pastor singled her out. 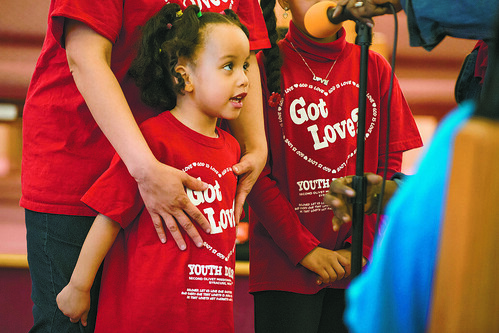 “He’ll ask me if I know why I sing and if I can show scriptures in the Bible that speak to me about singing,” she said. “And he calls on me to help with the kids now.”

Noel was raised as an only child in a single-parent household. Her mother paid for her to have singing lessons but it wasn’t until Tanyhill stepped in that she used her skills more for God. The night before a children’s music recital, the kids didn’t have musical numbers picked, and Tanyhill personally went to her to make sure they would have something prepared for the performance. The next day, they were the first group to perform — and were a hit, she says.

One of the young girls who performed in the choir and is part of the youth program now is 14-year-old Sydney Hall. She, too, was raised at Bellegrove and under the leadership of Tanyhill.

Most recently, the church got a new minister that many of the young girls didn’t talk to. Tanyhill told Hall to step up and be the first one to open up because other youth would follow. She did, and also takes that advice to Corcoran High School, where she knows some of her friends go to church sometimes because their parents make them, but they don’t spend as much time outside of Sunday mornings applying what they’ve learned.

And Tanyhill’s work with the youth isn’t just directly with them, but also with their parents. One member of the congregation found out her 14-year-old daughter was pregnant; the mom was embarrassed and didn’t know if she would continue going to church. But everything changed with one unexpected phone call from Tanyhill. 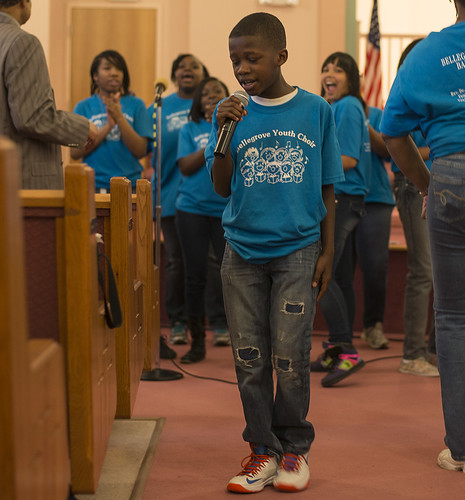 “I didn’t know who told him, but then it was no hiding,” said the mom, Nicole Hudson, a mother of three and grandmother of one. “He said, ‘Don’t hold your head down.’ He encouraged me to keep moving forward.”

Vernon Williams Jr. is the newly appointed youth pastor at Bellegrove who works closely with Tanyhill. “He’s a people’s pastor and especially for the youth,” Williams said. “They look at him as a father figure, as someone you want to please, you don’t want to let down, and he’ll always steer you in the right direction.”

Williams said he didn’t grow up with a father, either, and looks to Tanyhill not only as a spiritual leader, but also as a father figure. At the age of 19, he lost his brother to gun violence, which is what awakened his calling to ministry and children specifically.

About a fourth of the congregation at Bellegrove Missionary Baptist Church are youth, and Tanyhill and Williams ensure there are enough activities to keep them busy. Every Tuesday there is a prayer service. Tutoring is offered twice a week, girls’ and boys’ individual training is on alternating Fridays, and members of the youth group travel to symphonies, sporting events, and even across the country visiting college campuses to expose them to other cultures and communities.

Joshua Martin knows all of these well. He grew up at the church and now serves as the president of the youth department. He credits much of his spiritual growth to the pastor and the ongoing support from the church. Although he described his initial interactions with Tanyhill years ago as a “feeling out” process, he said their relationship has grown through a mutual trust that is shared with the entire congregation.

“He has empowered us to be leaders so it is our job to take what we do seriously and to own it,” he said. “We represent the church well and we represent him.”

“Everything we go through in life happens for a reason,” said Tanyhill, quoting the scripture from Romans 8:28. “And we know, all things work together for good to them that love God and to those called according to His purpose.”

Tanyhill said youth who went through his summer camp have gone on to work on Wall Street, or as lawyers, and others have joined professional athletic teams. When he preaches or speaks with them one-on-one, he doesn’t worry about being politically correct, he says. He only speaks the truth and shares what he’s held onto for so many years and what his mom always told him: “Keep your hand in the master’s hand and one day God will raise you up.”