A group of boys outfitted in full football uniforms, none of them an inch taller than 4-feet-10, lines the field at Kirk Park struggling to perform the perfect pushup.

The quarterback of the mighty-mights division of the Kirk Park Colts stands before the group, leading the counts.

Farther down the field, an assistant coach gives a talk to his teenage players about the importance of maintaining good grades while participating on an athletic team. To everything he says, the players respond with a loud, firm “Yes, sir.” 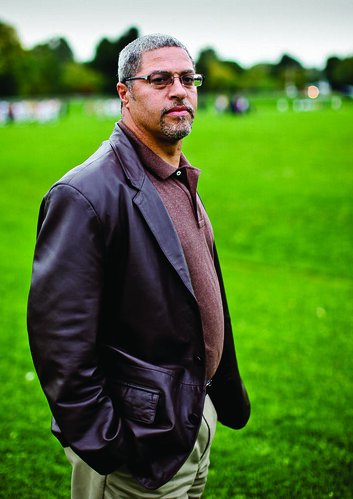 “The students primarily learn the concept of being on a team. Football is a team sport,” said Mark Hall, president of the Kirk Park Colts. “Discipline comes along with being on time, having your equipment ready. Football teaches good concepts and how to set goals.”

The Kirk Park Colts, a Pop Warner youth football team representing the South Side of Syracuse, is one of 19 participants in the Central New York division. The team has six different squads for boys between the ages of 5 and 15, as well as a cheerleading squad. Every Monday, Wednesday and Friday the 180 football players and 70 cheerleaders practice in Kirk Park under the watchful eye of passionate community volunteers.

This community was threatened on Sept. 11, the Colts’ first game of this season against the Sherman Park Bulldogs. Gunshots from the nearby woods interrupted the game, forcing it to be canceled at halftime and shaking the community. Nobody was hurt; a 15-year-old admitted to taking part in the incident. The Pop Warner Commission responded by deciding to move games based on a week-by-week judgment. On Saturday, Oct. 2, the commission moved the Colts’ games back home. Similar acts of violence during games have occurred before, including both shootings and stabbings.

It’s easy to judge the situation from the outside, but the latest incident was isolated and had nothing to do with the teams that were playing on the field, said Tiffany Rush, a volunteer who has been involved with the Colts for four years.

“You must come in and read the book. You can’t judge it from the outside,” she said.

Hall said that in the past 19 years he has served as president, 12 former Colts players received Division I athletic scholarships, and one player, Jo-Lonn Dunbar, went on to become a linebacker for the New Orleans Saints, who won the 2010 Super Bowl championship.

Joining the team costs anywhere from $100 to $200, and coming up with the money can sometimes be a challenge for the families.

“Most of the players come from single-mother homes,” Hall said. There are raffles to raise money, and scholarships are available for students who want to join the team but can’t afford it.

Hall, who played for the Colts as a child, recalled that the team folded in the mid-1970s because of a lack of support and money, leaving a noticeable void. “There had been an organization with a rich tradition that no longer existed,” Hall said.

In 1991, Hall and his wife, a former Colts cheerleader, decided to bring the teams back to the community. The first year back there were 175 football players and cheerleaders, and the second year that number increased to 350. The Colt cheerleaders are the only CNY squad to make it to nationals five times in a row, placing twice in the early 2000s, Hall said. In 2005, the junior PeeWee team won the state championship.

Hall said one of the biggest challenges that comes with the team’s success on the field is funding. 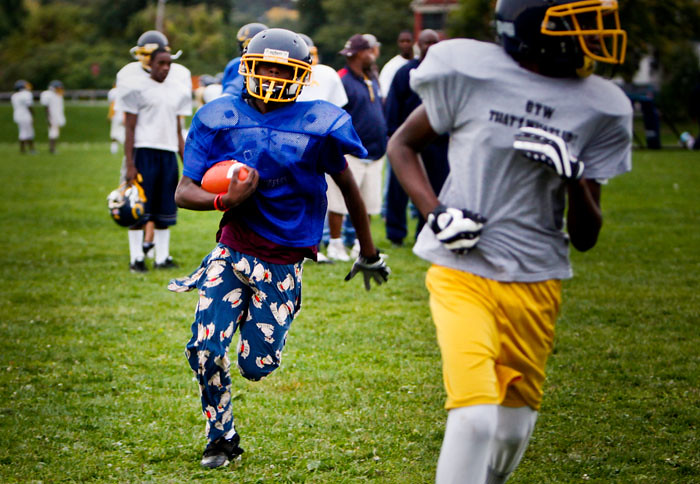 “It’s always money,” Hall said. “We have teams that are good, and as a result they can choose if they want to participate in other opportunities that require traveling — and that can take money.”

To help, students sell candy and host their own fundraisers. Some parents also donate money to the team.

Initially, Hall said he wanted to use the Colts program as an incentive for kids to come out and play while emphasizing education. For the first eight years, after-school tutoring was mandatory, but limited resources made that requirement difficult and it was dropped.

Volunteers keep the Colts together.

“(The students) definitely learn teamwork, responsibility, dependency, loyalty,” Rush said. Since most of the schools in the Syracuse City School District don’t offer cheerleading as an activity until high school, cheerleading for the Colts gives the girls a jump.

Rush said for her, the biggest challenges sometimes come with other parents who frequently work and cannot support the team the way they would like.

“We just try to be responsible for one another,” she said.

Shaquoya Howard has been volunteering with the Colts for the past 11 years. She said she wants to make sure that the kids on the field today are getting the same love and affection that her own kids did. Howard describes her volunteer role as ever-changing.

“The grocery shopper, the mother, the father, the big sister, I’m whatever they need. It’s a calling for me,” Howard said looking out at the children practicing on the field. “I have one biological child out there, but really, they’re all my kids.”

Rush and Howard often see girls from the community come to watch football practices. When she sees them she asks the girls why they don’t do something positive and become a Colts cheerleader, Howard said. It teaches girls to value themselves, she said.

“The community would be in trouble (if the Colts were not around),” Howard said. “There would be kids at every corner store, kids would be getting involved with drugs . . . The Colts are a great program and I don’t ever want to see it end.”