Patrice Williams’ pink and white sneakers barely make a sound as she sprints down a hallway at Corcoran High School.

It’s a Tuesday afternoon — more than an hour after classes have ended — and all Williams wants to do is practice. But because the track at Onondaga Community College’s SRC Arena is unavailable and Corcoran’s outdoor fields are covered with snow, Corcoran’s star track and field athlete is forced indoors. 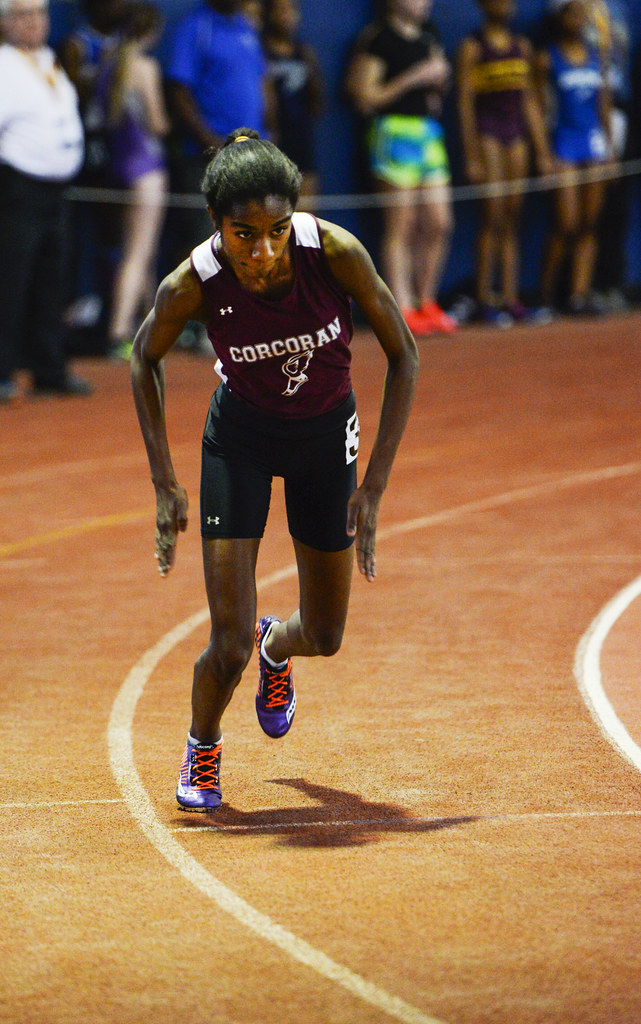 Williams, a junior, has no time to waste. In just five days, she’ll be behind the starting line for the 300-meter dash at the New York State Indoor Track and Field Championships at Cornell University.

The even-keeled Williams doesn’t say much. She smiles time and time again, choosing to let her running do the talking. Her long strides are smooth and quiet, but the times she posts are bold and loud.

The Silent Bullet, as Cougars coach Tara Jennings calls her.

“She’s a force to be reckoned with,” Jennings said. “I think when she puts her name on the map this season, that not only the District, but the Section and hopefully the state as well, will realize that Patrice is that Silent Bullet. She’s so silent, but she will run right by you.”

Since seventh grade, Williams has been running right by her opponents. As a novice runner at Grady Middle School, Williams had a natural talent that was apparent to Jennings, a former collegiate runner at State University of New York at Cortland. And when she began posting high school-like times around eighth grade, Williams herself knew she had the potential to take her track career to the next level.

“It’s a God-given talent,” Jennings said. “It’s something that you just knew. She won everything,”

At the state meet just days after that Tuesday practice session, Williams finished sixth in the 300-meter dash, posting a time of 41.19 seconds.

Corcoran assistant coach Joseph Serrao, who has been at Corcoran for almost 20 years, called it a “luxury” to have Williams on the team. She is one of the top three runners he’s ever seen come through Corcoran, he said.

At the indoor practice session, Williams’ routine consisted mostly of stretching and cardio. Her distance program had to be flipped to Wednesday because of the unavailability of a track. Williams’ gray and garnet Corcoran track and field shirt barely showed any signs of sweat as she did leg crawls, squats, pushups and jumping jacks.

“There’s our star!” one passerby exclaimed.

“There she is!” another said. “She’s going to states, right?” 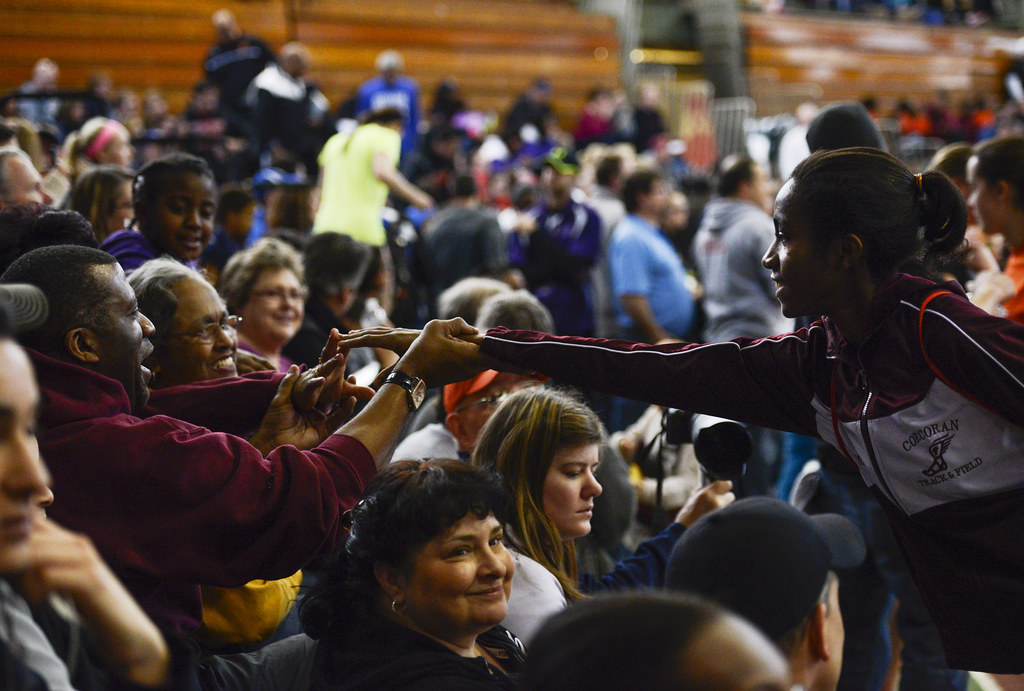 Each time a Corcoran staff member walked by and made a comment, Williams grinned.

“Everyone knows who she is,” Jennings said, laughing. “And that’s what’s funny. You would think everyone knows who she is because she talks a lot. If you notice, she’s not someone who carries huge conversations. She speaks for herself when she steps on the track, and it speaks volumes about who she is as a person.”
Williams said it feels good to have the support, but there is pressure. 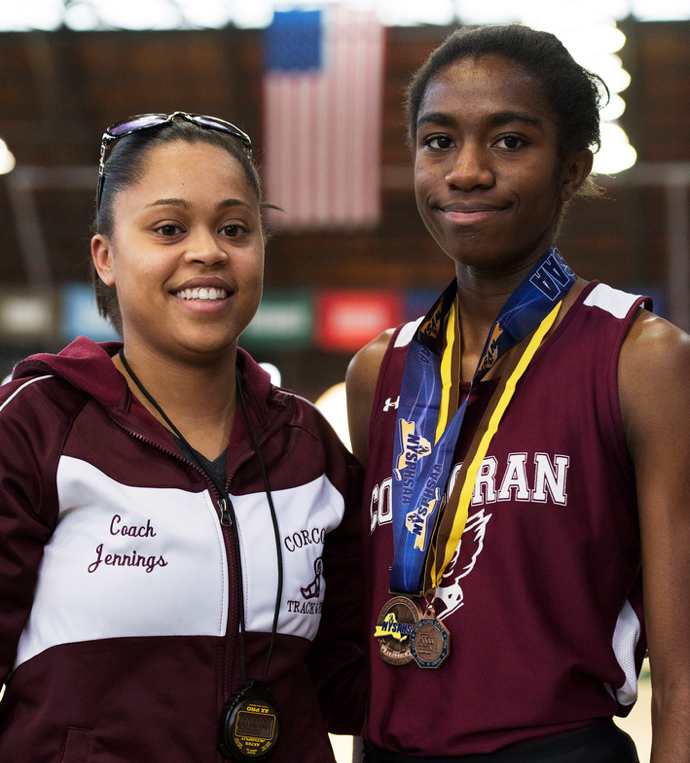 Patrice Williams stands with her coach Tara Jennings, who calls her “a force to be reckoned with.” | Lenny Christopher, Staff Photo

“Watching her run was like she was the only one in the race,” Dupree said. “The gun would go off and she’d be so far ahead of everyone.”

But with all the victories and all the recollection, there’s one achievement that Williams has yet to accomplish. She has yet to beat Liverpool High School junior Oreoluwa Akinpelu. At the Section III State Qualifier at SRC Arena on Feb. 19, Williams ran a 300-meter time of 41.18 seconds. She qualified for the state meet, but lost to her Liverpool rival by less than a second. 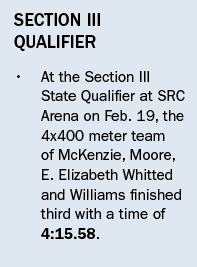 Even though Williams lost, she called it her favorite memory of her running career. “I’m always nervous to run against her,” Williams said. “But at sectionals I almost beat her.”

At the state meet, Akinpelu again finished one spot ahead of Williams.

Midway through the Tuesday training session, Jennings went to check her mailbox. When she returned, without saying a word, she handed Williams a white 4×9 envelope.

Williams flashed another large smile. In the envelope was a recruiting letter from Utica College. “I wasn’t really thinking about running track in college,” Williams said.

Serrao, the Corcoran assistant, echoed statements made by Jennings and Dupree about Williams’ work ethic and natural talent. He also pointed to her exceptional ability to keep her legs moving in a big, long stride.
“When she’s on the track, you’d think she’d get swallowed up,” Serrao said. “But once she gets on the track, she’s like a different person. She’s aggressive. She goes out and she hates to lose.”