Coach Dale Johnson called in his youth soccer team after a Sunday afternoon practice this spring, as they begged for more time on the field. 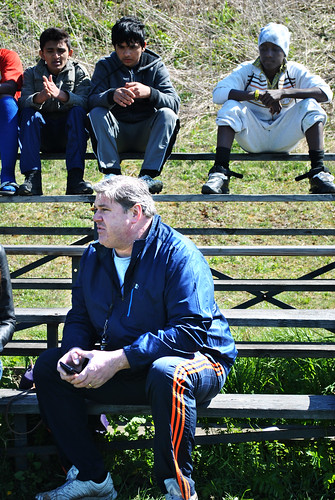 Johnson remembers growing up in a house where domestic violence was a frequent occurrence. He found solace and comfort in sports and is now paying it forward through Tillie's Touch. -- Lena Budd, Staff Photo

Johnson, a volunteer youth soccer coach and founder of Tillie’s Touch, a nonprofit organization that supplies children with sports and school supplies, has been working with kids from the South and North sides of Syracuse since 2009.

Johnson said he had been volunteering to help kids for years in his hometown of East Syracuse, but recognized the need for programs to help other kids as well.

“Life can be tough for kids in the city,” Johnson said. “They’re faced with a lot of adversity, so when I saw that there was a need out there to help these kids out, I decided that this was the right thing to do.”

Johnson’s organization is named after his daughter, Abby, whose middle name is Tillie. It provides children with school supplies and sports equipment financed through donations. The donations are distributed through community hubs like the Southwest Community Center. Johnson also uses the donations to equip his youth soccer teams with cleats, uniforms and other essentials that they need to play.

Johnson said he is passionate about helping kids in need because of the hardships of his own childhood.

“I grew up in a household that had domestic violence,” Johnson said. “ … Sports became an escape for me. No matter what bad things were happening, I could escape and play ball for a few hours, and I want to bring that opportunity of escape to these kids, as well.”

Johnson said he hopes to keep them focused on their futures.

“I want to give kids everything they need to be able to participate and be passionate about sports,” Johnson said. “I love to see that I’m coaching kids whose lives revolve around sports, because that means they’re putting their time into sports and not anything destructive. I don’t think any good can happen from just sitting at home all the time.”

Johnson said because of his past, guiding and taking care of children has become an important part of his life, especially within his own family.

“One of my favorite things to do is spend time with my family and hang out with my kids,” Johnson said. “We love to watch sports together and go to SU basketball games. Family time is very important.”

Johnson said his two children — Abigale, 15, and Matthew, 11 — have shared his interest in sports and have even become involved with his youth teams. 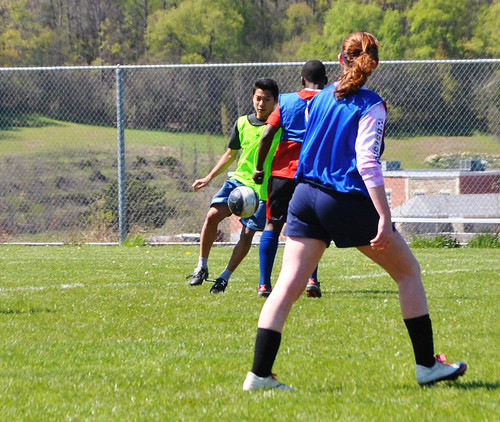 Johnson's 15-year-old daughter Abigale often plays with the u-16 team. She is the only girl and only American native on the team but does not receive any special treatment. Nicknamed Tillie, the charity was founded in her honor. -- Lena Budd, Staff Photo

“My daughter Abby plays on my u-16 team and she’s really become like a sister to these kids,” Johnson said. “It’s great to have my own kids involved in my work.”

Johnson said the most important lesson that he emphasizes to his kids is to be passionate about whatever they choose to do.

“I always tell my kids and the kids on my team to always give 100 percent,” Johnson said.

“It would be great to have them be as passionate as I am about sports and community work, but as long as they’re passionate about what they’re doing, I’m happy.”

Johnson said he feels lucky to take part in children’s lives and is very happy with the success of his efforts.

“The interest in this program has not stopped growing since it started,” Johnson said.

Johnson said he plans to set up more sports teams and youth programs in the coming months. There are currently 30 to 40 kids participating on Johnson’s soccer teams and he said he expects that number to double by next year.

Since starting the program, he said he’s helped nearly 500 students.

“We have had a lot of success with Tillie’s Touch and our sports programs,” Johnson said. “I have no intent to stop anytime soon.”

Tillie's Touch was founded in 2009 out of the garage of Johnson's East Syracuse home. Now, he has about 60-80 youth playing on his soccer teams. On April 29, 2012 the under-16 team scrimmaged at Nottingham High School in Syracuse. -- Lena Budd, Staff Photo