This is a solo act. Sgambati is a 15-year-old Manlius Pebble Hill rising junior strumming his way toward hopes of Berklee College of Music citing inspirations like Jana Kramer, Mumford and Sons or Augustana. At first sight, the audience simply sees a kid on stage and thinks, “hey, he sounds good.” After two or three songs, listeners have been convinced that “the kid” is really, really good. Sgambati boasts a clear voice with great rasp and comfortable command of the audience. 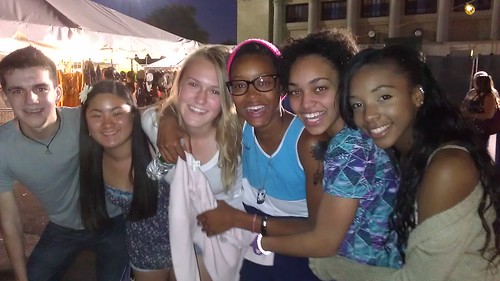 Jessie Sgambati, at first strum, sounds like the next member of Sister Hazel but with a little more soul in his body and a reservation ready to tear free from his guitar.  The folk upbeat acoustic sound is Jessie’s signature, stating that the piano was his “foundation instrument” but that the guitar is where he feels at home.

In the audience, friend Tamika de la Rosa describes Jessie’s style as “steezy,” stylish and easy-going in his relaxed attire, initial vocal range and upbeat attitude. Yet Sgambati attempts the difficult covers like Adele and mammoth names like Mumford and Sons. This is by far, not relaxing but successfully ambitious on his part because it punches him into a grittier and deeper vocal register. It’s no wonder this young talent caught the ear of Vanessa Johnson who has connected several talents performing on the Pan-African Village stage.

Take away song of the night:

The Pan-African Stage next year hopefully.

“We’d love to have you back,” praised Vanessa Johnson after Sgambati’s performance. “There were tears in my eyes. An even crowd is not easy to hold,” she congratulated.

Sgambati’s pack of friends from school cheering him on and asking for autographs after his set.