The mic, in a sonic wail, gave out feedback. The band’s front man is not intimidated. He looks out at the patchy-filled seats and laughs. After about two songs, he makes an announcement, “Hello everybody. My name is Eric ‘Love’ Jones and 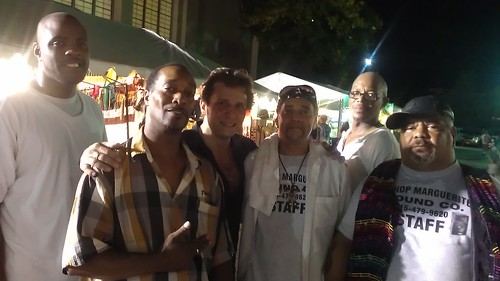 I … am a fool.” Contagious laughter trickles through the tent. Not even a verse later, One Nation is funking out a Cameo cover, “Word Up,” to a dancing Congo line gathering outside of the tent.

One Nation, formed by member Tony Brown, is a funk-filled all male set consisting of a mid-range lead vocal, lead guitar, bass, percussion and drummer. Members of this band have played together one to four years.

“Funk. We can turn anything into funk. We have fun funking,” described vocalist/percussionist Tony Brown. Funk, the popular sound of local bands, is clearly the performance-driving fervor behind One Nation’s performances. Take away leads with Nick Mandarino and lively dialogue from vocalist Eric ”Love” Jones edge off a solid performance where any member can command a solo.

Take away songs of the night:

Contacts: Catch Them Through Tony Brown