How does an average-looking band pull people of all ages to dance to ’60s through ’80s tunes in puddles of water? Play it loud. Sing it out. Dance on stage as if the decade’s greatest hits were being sung for the very first time. 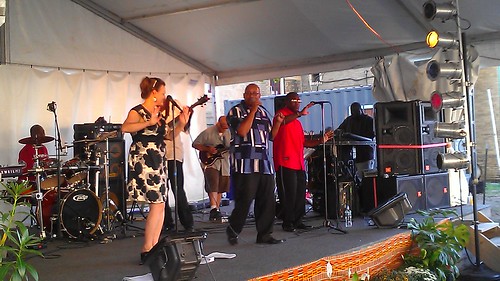 Well, if fun was a sound, it would definitely be Soul Mine’s genre. This group is larger than most of the acts that performed on Pan-African Village’s stage and therefore prompted a big obstacle for any lead vocalists: break free from the band. Soul Mines lead vocalist, Rick Linzey, does this by just having fun and keeping the energy as high as possible. And energy, with the difficulty-level of songs chosen by this band, is no easy feat.

Take away song of the night:

“That really funky stuff like Cameo, with lots of Bass and Funk!” With selections like “Play that Funky Music,” “Ladies Night,” “Boogie Down,” “Jungle Boogie,” “Disco Night” and the list goes on and on, the audience clearly didn’t care what was played as long as they were entertained.

“My generation grew up with music, and there’s nothing better,” said audience member Kathleen Perez.