A 'Geek' with Style

Gaulden, 29, has been pursuing her associate’s degree in electrical engineering technology at Onondaga Community College since January 2012 and is set to graduate this winter. Six years ago, she took over Mo’s Touch Inc., a hair salon that her mother, Brenda Jones, founded at 1216 W. Colvin St.

Gaulden’s two passions keep her busy. Every week, she spends 12 to 14 hours in class and at least 40 hours at the salon — then tackles homework as soon as she gets home. 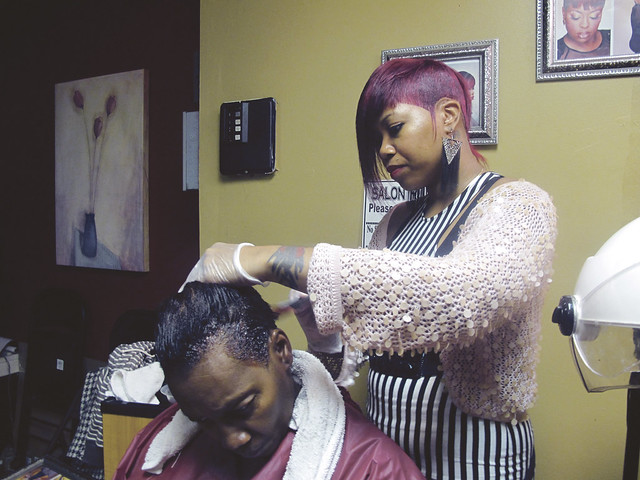 Monique Gaulden does the hair of Tawyna Montgomery, 49, who is a claims examiner and realty worker. | Madina Toure, Staff Photo

Her interests in hair styling and engineering start at home. Her mother founded the salon in 1998. Her stepfather is a programmer for an electrical company, and her father-in-law was a science teacher at Central Tech in the 1970s and at Fowler High School in the 1980s.

Jones, 52, is still a hair stylist at Mo’s Touch and characterizes her daughter this way. “She’s got this stylish way about herself and yet she has this nerdy career to be an engineer,” Jones said. “And she’s pulled it together and she’s doing a good job. And that’s what makes her unique, because she’s not a certain type.”

Gaulden attended William Nottingham High School from 1998 to 2002. She studied electrical engineering at Morgan State University in Maryland for one year, but dropped out because of money issues. She studied at Onondaga Community College from 2003 to 2005, then left to work and support herself. She has three sisters and a brother — Cerissa, 33, Aurora, 26, Jasmine, 25, and Ernest, 22. They were born and raised on the East Side by their mother and stepfather.

Growing up, she said, she was good at math and liked it. Her face glows when she talks about her engineering courses.

“I like calculations. I like the theory behind it. Why is this and why is that?” she said.

“There’s one specific equation, which is Ohm’s Law. Ohm’s Law will never change. ‘E’ equals ‘I’ times ‘R,’ and ‘E’ is voltage, ‘I’ is current, ‘R’ is resistance, and that’s what I love about it. Ohm’s law leads up to every equation that you will deal with in electronics.”

Gaulden has overcome two challenges: being an African-American woman in a predominantly male field — she was the only female in her program when she first started — and being older than the average college student.

One classmate, she recalled, refused to accept that she was writing the Pythagorean Theorem correctly, even though she had taken a more advanced calculus course.

“So many people are like, ‘Why are you switching your profession?’ It’s like, ‘I’m not switching my profession, this is something I always wanted to do,’” she said. “But it seems as if I have to explain myself more, to either my professors or to my classmates, why I want to be an engineer, and I shouldn’t have to do that.”

Ultimately, people began to view her with respect when they realized that she knew the material.

Indeed, Gaulden is demanding of both her professors and peers — a quality that’s refreshing and challenging for a professor, said Ronald Hinshaw, professor emeritus in OCC’s electrical technology department and teacher in Gaulden’s Power Systems I course.

“We were talking about complex power and she just said, ‘I don’t know what you mean by that,’ ” Hinshaw said. “ ‘Can you explain it some different way?’ And I did, and she said, ‘Thank you.’ She doesn’t hesitate. If something is presented and it isn’t very clear to her, she will ask you to present it a different way.”

For 15 years, Gaulden worked at the salon just to make money. She began to do it more seriously because she needed a steady income to pay for college in Maryland.

“When I came home, I said, ‘Ma, I was doing hair’ and she said, ‘OK, fine. Now you work,’” Gaulden said. “So I wasn’t a shampoo girl anymore, I wasn’t a prepper. I had my clients, and I was actually able to complete hairstyle.”

The most thrilling moment, she said, is when she does a person’s hair for the first time. 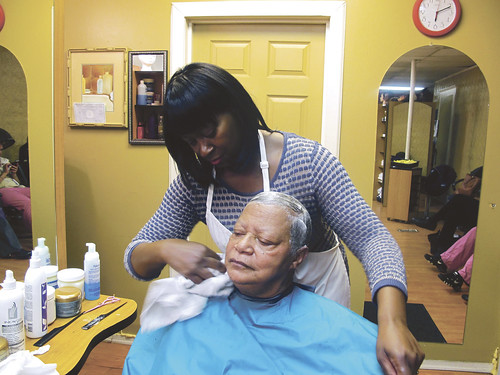 Monique Gaulden's mother, Brenda Jones, 52, is a hair stylist at Mo's Touch. She opened the salon in 1998 and was owner of the salon until Gaulden took over in 2008. | Madina Toure, Staff Photo

“I turn them around to the mirror and they’re ecstatic,” she said. “They love their hair. Sometimes, they cry. I transform them into something they wanted. And I want to say I do that about 99.9 percent of the time.”

The salon also has a family atmosphere since she and her mother work there together. That sometimes poses a challenge, as they must balance being personal versus professional, and also because her mother owned the business first. But they always have a good time, and their mother-daughter bond sets an example for clients and their daughters, Gaulden said.

“We’re human, and they see that Mo has flaws and Mo argues with her mother and Mo’s mother argues with Mo, so we’re human,” Gaulden said.

Her mother said they need to give each other space. “Sometimes we have more customers than we have supplies in terms of sinks and dryers and stuff,” Jones said. “Time management is really important to us, that we don’t step on each other’s toes. When we first started out, that was a challenge for us.”

Gaulden typically deals with younger clients while Jones deals with older clients,  Jones said. “I actually have more mature clients,” she said. “It’s just good to see how we work together and how we get along.”

Tawyna Montgomery, 49, a claims examiner and realty worker, has been a customer at the salon since 2006. She said she appreciates how Gaulden tailors her hairstyles to personalities.

“I’m bubbly. I was a model for her at some of her hair shows, so anything she put on me, she knows I’m with it,” Montgomery said. “I try different things. I like different things. I had this Mohawk that was just nice, was me. And then I had another one. My hair was red, red, red!”

Jones said she is so proud to see her daughter running the salon.