Fewer veterans of current conflicts are joining the American Legion

American Legion Post 1361 needs a few more good men like Josh Hefti. Hefti, a corporal in the Marine Corps Reserves who spent 10 months in Iraq, returned home in 2009 and did the unheard of: He decided to become a member, and is now the Syracuse post’s one and only veteran from the war in Iraq. But Hefti never heard about the Legion from his commander in the Marine Corps, or anyone else in the service for that matter. 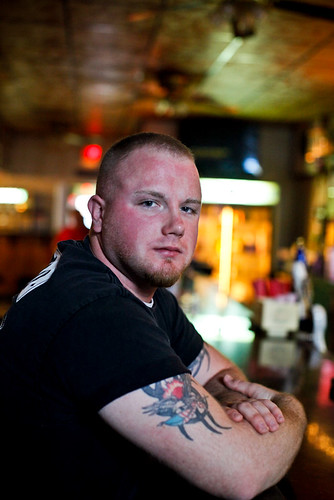 Josh Hefti is the only veteran from the Iraq war who is a member of the American Legion Post 1361. -- Photo by Mackenzie Reiss

“I honestly don’t know of anybody that was in the military of my age that’s a member in the American Legion,” Hefti said. “I had no idea what it was all about, other than that my father and my grandfather hung out here, until I came. Now I’m glued. There’s not a single week where I don’t stop in.”

On paper, the mission of the American Legion is to support veterans from every branch of the armed forces who served during a time of conflict. But for members of Tipperary Hill Post 1361 on West Fayette Street, the battle isn’t over yet. They are still losing soldiers: this time, on the home front.

John Kapelewski, a Vietnam veteran, has been a member at the Legion for eight years. He takes a pull on his draft and delivers the bad news. “We’re doomed,” he says. “Doomed … I think it’s gonna die, the American Legion. As people are dying, [Legions] are dying.” He stops to let his eyes wander the room for a moment, resting on each gray head, as if to prove his point.

The WWII generation, once the driving force of membership, is now passing on. Today membership is 30 percent less than it was during the ’40s and ’50s, when membership peaked at just more than 3 million, said Bill Sloan, the assistant director of International Affairs and Members at the Legion’s national headquarters.

“There’s been a tremendous loss in the WWII generation within the past 20 years,” Sloan said. “WWII vets made up the majority of membership in the ’80s and ’90s.

Sloan estimates that 60 percent of current members served in Vietnam, 20 percent in Korea or World War II, and the final 20 percent in various conflicts since 1991. But Tipp Hill hasn’t reaped the benefits from that influx of younger vets. In fact, the average age of the post’s 240 members is 65.

Veterans of Vietnam, Korea, Bosnia and other conflicts look to younger vets, fresh from the wars in Iraq and Afghanistan, to fill in the ranks. But those who may be able are seldom willing to join. To recruit new faces, the post has relied on out-dated methods — word of mouth and hosting social dinners, neither of which has proved effective in retaining veterans in their 20s and 30s. There is no Legion Facebook page or post website or Twitter feed.

Last October, when financial woes forced the Legion to re-evaluate its operations, post leaders were forced to choose between making dramatic cuts to their hours of operation, or switching to an all-volunteer force. But rather than close their doors, post leaders asked their staff, who once labored for pay, to do the same for free. The majority said “yes.”

Because they did, they were there for Hefti.

“I went through a tough relationship a few months ago. She said that I changed when I came back,” he said, so much so that the relationship ended within a year of Hefti’s return from war.

“I felt like it was my fault because I came back from deployment and she said I wasn’t the same guy she fell in love with. So, it’s good to have these guys that have been through the same experiences to talk to. That’s something that I wouldn’t be able to talk (about) with my other friends, or out at an average bar.”