Anthony Harris El raises his hands at the lectern, his eyes tightly shut in concentration as he leads his study group in prayer.

The Moorish flag billows over the airway, side by side with the flags of Islam and the United States. A hushed silence hovers over the group as the meeting ends and Harris El closes his readings. 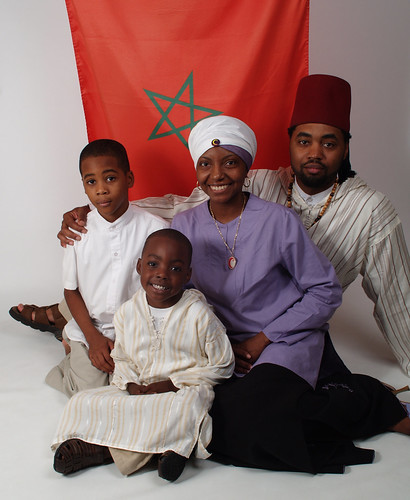 Nearly 15 years ago, he never envisioned himself as sheik of the Moorish Science study group at the South Side Communication Center. At the time, he felt hope- less, he said, dropping out of high school before gradua- tion and unhappy with his lack of success.

He continued on the same path until he found promise in the Moorish Science Temple of America, something that brought so much hope to him that he was willing to sacrifice his family for faith. Early on, Harris El faced threats of divorce from his first wife and exclusion from his family because of his religion. He was raised a Baptist, and his family members were devout Christians.

His father finally asked him, “Are you willing to give up your family for this?” Harris El answered “yes” without hesitation.

Harris El is one of nearly 500 Moorish-American Moslems in Syracuse, according to Charles Pierce-El, a follower of 10 years.

Harris El sees its benefits as twofold: having an identity and becoming a better citizen through the tenets of Islam. He focuses on the teachings that emphasize national pride and the idea of peace.

For Harris El, he has found answers he didn’t find in other religions. His questions about his purpose in life, as well as issues with relationships and family, were satisfied. He found common ground with his second wife, Shante, who is also Moorish-American, and they agreed to raise their three children to follow the faith.

Male followers of the faith often wear a fez and women don a turban. The fez symbolizes 360 degrees of knowledge, Pierce-El said.

“I’m one of the few Moors that walk around with a fez every day to show people that you don’t have to be afraid of me,” Pierce-El said. “When people hear Islam, they think of terrorist. I hope people understand that we’re no different than they are.”

Moorish-Americans often add “Bey” or “El” to their names, said Pierce-El, to give distinct recognition, a way of taking back their identity from names that may have been given to oppress their forefathers.

Harris El describes what it means to him.“It links me not only to the future but to the rich history of my people,” Harris El said. “I don’t just stop at slavery.”

Sharif Bey, a former South Side resident who now lives in Camillus, says the idea of national pride brings responsibility and accountability to the people. Bey has been involved with Moorish Science since 1988.

An important idea, he says, is uniting African-Americans who otherwise do not have a “cohesive unifying factor” aside from their skin color. He says he believes as a group they must live their beliefs of peace to show others their message, emphasizing positive activity in their community.

“Without cultural identity you’re just an open wound,” Bey said. “We’re not radicals running around with fezzes and turbans. We’re productive and industrious, we’re upright, independent people, and we care for our loved ones.”

Harris El said he hopes to promote knowledge of Moorish-Americans to the Syracuse community by building the communication center’s study group and establishing stable supporters.

“The community in Syracuse is in need for conditions to be changed,” Harris El said. “We have a place for assembly, to branch out to do things for society and enrich the world.”