A group of six casually dressed men in their 50s and 60s cluster around a dimly lit bar, watching the football game on TV. The men calmly drink beers, and eat cheddar cheese and crackers with homemade Hungarian peppers prepared especially for this gathering. For the past 25 years, this group of longtime friends can be found at Swallow’s Restaurant every Sunday evening for what they describe as “guy’s night.” 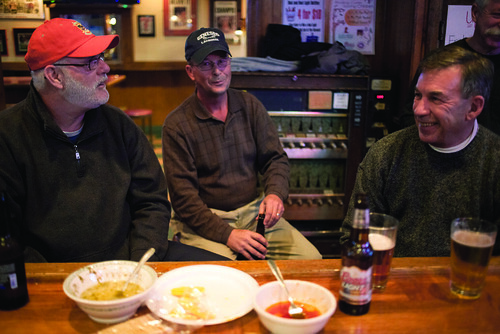 “This is my social networking opportunity,” said 63-year-old Paul Casey, a Sunday night regular for the past 20 years. “It’s a night to talk politics and sports,” added Mike Sargis, a 59-year-old regular.

Though a few of the men have known each other since childhood, all the men attend the same parish, Most Holy Rosary Church. Initially, the guys played basketball together at the church on Sundays.

“We started coming [to Swallow’s] after our basketball games,” said 59-year-old Chris Lange, who is lightheartedly referred to as the “transplant” because he’s originally from Long Island.

While the majority of the men no longer play basketball at the church, the Swallow’s tradition continues. “We joke we are the ‘no sweat club’ because we don’t play basketball anymore,” Casey said.

There is no official name for the group, said 61-year-old Joe Antuna, who is considered the informal ringleader by his friends. Similarly, there is no formal communication between them about who will bring the peppers or who will attend each week. “You just show up,” Antuna said. 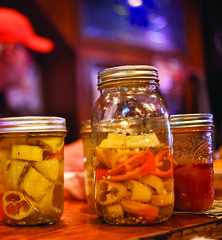 The most important rule is to not forget the homemade Hungarian peppers. -- Photo by Andrew Hida

Though the friends consider it an informal gathering, they do have some rules. First, it is understood that if there is a national holiday like Memorial Day, when there is no work on a Monday, they all know to go to Swallow’s on Monday night instead of Sunday. Secondly, if there is a family holiday, such as Mother’s Day, that falls on a Sunday, it is assumed that their family gathering must be over by 6 p.m. so they are free to go to Swallow’s, explained Pierce Ryan, 62, a Swallow’s regular and owner of Ryan Windows and Doors.

Sunday nights at Swallow’s is an expected get-together for these South Side men. “My wife gets worried if I don’t go to Swallow’s,” Ryan said. “She asks me if I’m feeling OK if I’m home on a Sunday night,” he said, laughing.