With the desire and drive to help her community, Linda Donalson has raised money to help more than 200 families pay for the burial of children who die as infants. On Sept. 15, nearly 100 supporters gathered at Sawmill Creek Shelter at Onondaga Lake Park for a five-kilometer, annual fundraising walk benefiting KJ’s Angels Memorial Fund. 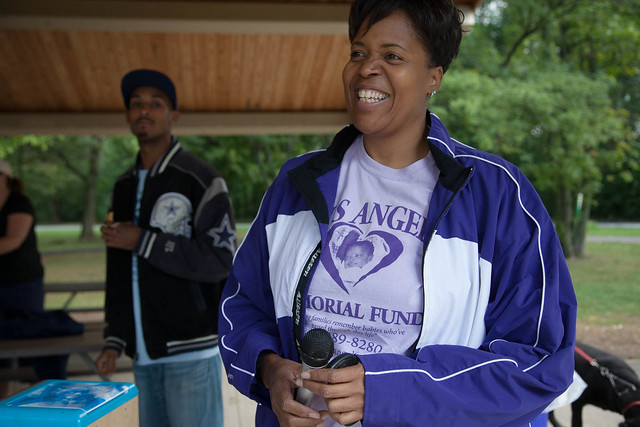 Donalson, an Onondaga County probation officer, serves as co-founder of KJ’s Angels, a nonprofit organization named after her late son, Kevin JaRon. In the memorial’s nine years of existence, it has raised upwards of $50,000.

Kevin JaRon, affectionately known as KJ, died in 2002 from Sudden Infant Death Syndrome, the cause of death for thousands of children every year usually between 2 months old and 4 months old.

The inspiration for her work began when Donalson paid a visit to her infant son’s grave in Oakwood Cemetery in August 2002 and was saddened to see that most of the graves were covered by overgrown grass, she said.

At the time of KJ’s death, Donalson and her husband, Kevin, could afford a grave marker for their child. The opening and closing procedure of a child’s casket and a stone marker can cost almost $1,000. KJ’s Angels Memorial Fund helps by providing families with financial assistance.

Donalson founded KJ’s Angels with friend Cindy Squillace, bereavement councilor at the Center for Sudden Infant Death, which is housed within the Center for Living with Loss at Hospice of Central New York in Liverpool.

After its founding in 2003, KJ’s Angels held its first benefit in January 2004. The fund has helped six families in just the past nine months.

Donalson initially organized an annual dinner to raise money. The first, held in a howling blizzard, brought in about $7,000. She kept the dinners going through 2009, but decided she needed something new.

With 95 registered participants just this year, KJ’s Angels Memorial Walk raised about $5,000 through pledges and donations.

Before starting this year’s 5K, walkers came together for prayer, praise and stretching. Donalson and Squillace led the gathering. Squillace invited walkers to step up to the microphone and pay tribute to the child or children they were honoring. 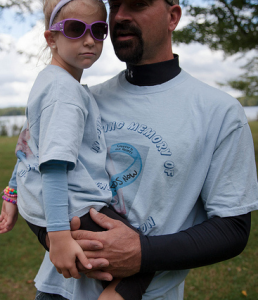 Wayne Newton and his daughter, Zoe, prep for the 5K, for which they are walking in the memory of Wayne's son and Zoe's brother, Calen, who died suddenly in 2010. | Katie Hogin, Staff Photo

One return participant to KJ’s Angels Memorial Walk is “Team Aimee.” Aimee Newton lost her infant son, Calen, in 2010. Since then, she has participated every year and brings 30 to 40 walkers, Donalson said.

“She is a force to be reckoned with,” Donalson said.

KJ’s Angels Memorial Fund also sells hand-painted, wooden Christmas ornaments. Every year, a few women dedicated to the fund’s cause donate their time and talent to buy the necessary materials and produce almost 1,000 ornaments. These ornaments sell for $2 each, and all the proceeds benefit the fund. “God has connected me to all the right people,” Donalson said.

Because Donalson is an active member in her community, she has supporters from many organizations. As a probation officer, she works specifically with youth at the Probation Department. Donalson also coached high school basketball, worked with the Salvation Army and served on the board of REACH CNY, a nonprofit organization that educates and advocates for health and accessible human services. Donalson said she likes working with younger folks because “there’s hope in youth.”

Donalson won Woman of the Year from the Syracuse Commission for Women, in March 2012.

Christine Fasuyi played basketball for one of Donalson’s teams and said she admires her, even considering her a second mother. Fasuyi participated in the KJ’s Angels Memorial Walk for the first time this year.

“It’s hard for me to take any praise for what I do because it’s what we’re supposed to do for each other,” Donalson said. She wishes KJ’s Angels did not have to exist. “Our mission is to not be needed,” she said.

Donalson hopes to make an educational impact through KJ’s Angels and teach people how infant deaths can be prevented. As for the longevity of KJ’s Angels Memorial Fund, Donalson said she trusts the Lord. 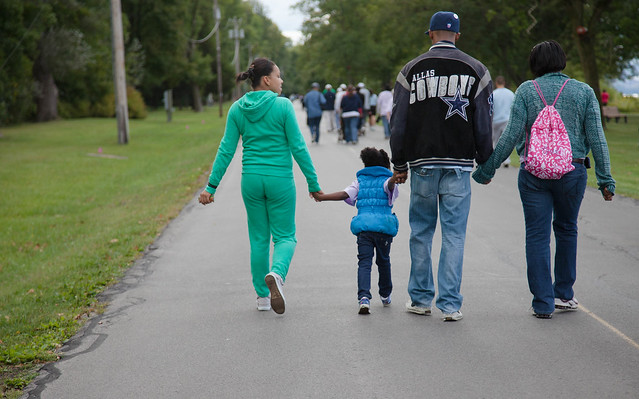