Carrie Mae Weems says that she does not need to speak to make a difference — she can craft photographic images and weave them into a local culture in a way that can make an impact louder than words.

Weems, who lives in Syracuse and teaches an art course at Syracuse University, is working on a public art project to combat youth violence on the South Side and the city as a whole. Though hostility and aggression seemed like a mainstay in areas of the city, she said the eruption of violence sparked her to be a catalyst for her community.

“It’s been going on for a while, but what’s happened in the fall really unnerved me,” Weems said. “I thought it’d be important to somehow raise awareness of the community and heighten the opposition to this kind of violence.” Weems referred to shootings in October and November last year, one of which was the accidental killing of an infant.

The project, which Weems envisions as a six-month venture, involves the use of electronic billboards, signs and posters to connect her photos with anti-violence messages such as “Our Failure To Respond Is The Problem!” 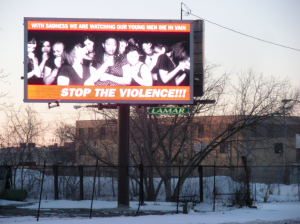 Her photos are currently running on billboards on South Salina Street just south of Adams Street.

She also hopes that her signs, which she refers to as “safe zones,” would help spread the word and unite members of the community.

“The idea would be that I was making a series of little posters for businesses, community centers and homes, and they would put it in their windows,” Weems said. “I’m calling it a ‘circle of concerned citizens.’”

Though Weems said she is working alone on the project, she has plenty of support in Syracuse because of her career, loyalty to the area and common goals with local organizations. The Southwest Community Center, Community Folk Art Center (CFAC) and Light Work are all collaborating with Weems.

The non-profit Light Work, a digital media center that is affiliated with SU, is further affiliated with Weems on a deeper level. Her husband is Jeff Hoone, the executive director of Light Work, and the organization has provided a way for others to join the anti-violence cause.

“She’s doing this project, so people donate to Light Work and then we support her,” Hoone said. “We’ve done this with many artists in the past, and one of the goals of Light Work is to support art and photography.”

The CFAC will also shoulder some of the financial load by contributing to the billboards, which cost $400 in rent every two weeks, and is also supervising a program where the local youth can design a mural to be part of the artwork. The CFAC has previously featured Weems’ work in its gallery, and executive director Kheli Willetts was happy to continue their collaboration in a way that benefits the community.

“This is her independent project, and she wanted to affiliate herself with like-minded people and like-minded institutions, and we happen to be an institution that agrees with what she’s doing,” Willetts said.

The Southwest Community Center has also issued its full-fledged support of the anti-violence project primarily because it has had a firsthand look at what Weems is trying to battle, since acts of violence have taken place nearby. Executive director Jesse Dowdell understands that no significant change can occur overnight, but he is eager to take advantage of any available resources to improve conditions on the South Side.

“Carrie Mae has been a godsend as far as I’m concerned,” Dowdell said. “We offer services here from the cradle to the grave, so I think it’s more than just about the kids. Hell, I think that if we get a kid in this building, we can certainly fix him. We want to affect the environment that the kid came out of, or else it’s all for naught.”

For Weems, it’s all been about engaging that environment with her form of artistic expression. That’s how she tells her story, and that’s how she tries to make a difference.

“I’m just trying to stay out front and do some visual material that at least lets perpetrators of violence know that the community is watching and we’re no longer going to stand for this kind of nonsense,” Weems said. “Citizens themselves have to be responsible for what goes on in their neighborhood.” 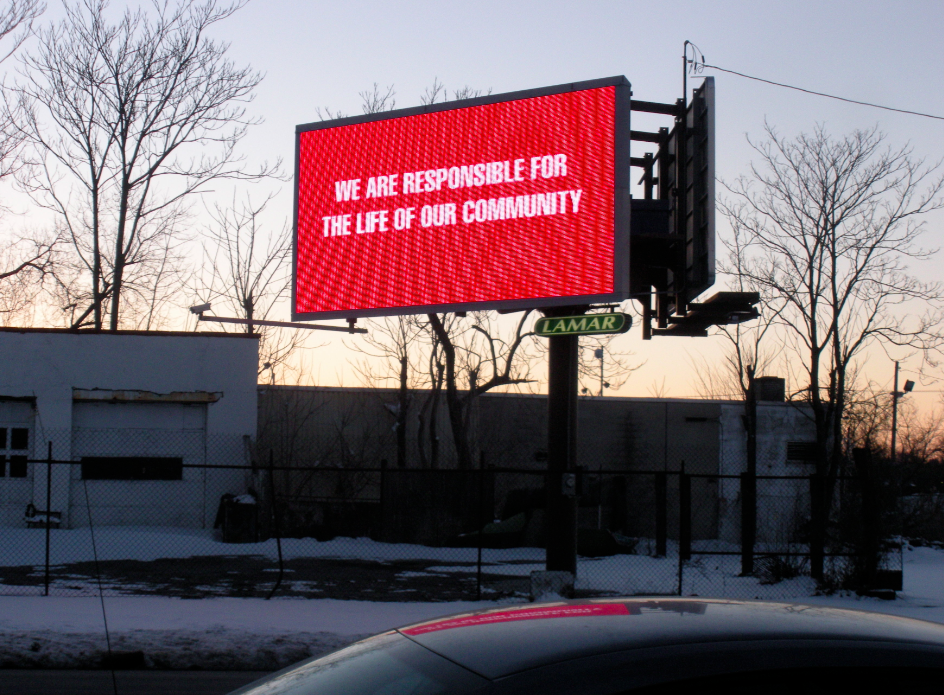