Community Leader and Business Owner is Mother Figure to All

Gwendolyn Fagan was going to church one day when she passed a little boy, about 4 or so, sitting out front and munching on a snack. Fagan knew his grandmother from church, though the youngster didn’t know her. She watched as he tossed the scraps of his snack on the ground.

“I said, ‘Get that watermelon up.’ First thing he said, he looked at me, ‘Do you go to this church?’ ” Fagan, too startled at the back talk to think faster, said, “Yes I do,” an answer that prompted the boy to clean up after himself. 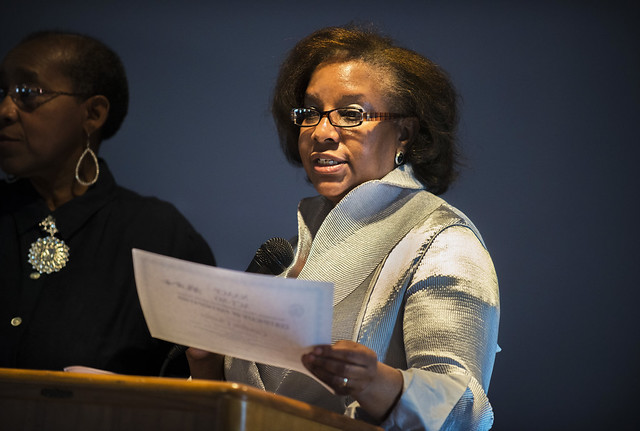 Gwendolyn Fagan, 61, hands out awards to students during a formal ceremony sponsored by the Onondaga County NAACP. The ACT-SO program centers on the dedication and commitment of community volunteers and business leaders to serve as mentors and coaches to promote academic and artistic excellence among high school students. | Joshua J. Wahl, Staff Photo

“But now I’m thinking I should have said ‘no’ to see what he was going to do,” Fagan said, recalling the day. “He picked it up and took it inside, saying, ‘I better, since you go to my grandmother’s church.’ ” She laughed, recalling the comedy of the situation. Then, more seriously, she added: “You know, you gotta watch them.”

With a slight graying at her roots, 61-year-old Gwendolyn Fagan has a soft, thoughtful gaze that splits into familiar creases of laughter as she talks. Nothing about her appearance says “menacing.” But in her family and her community, those who know her, particularly the children, realize she is not to be trifled with.

These days, she says, a lot of parents don’t reprimand their children for one reason or another, and won’t let anyone else do it, either. But that’s not how it was when she was younger, and it’s still not in some places, such as her church.

“I’m like, ‘You know what? If your child’s here I’m going to discipline him,’ ” she said. “I’m not going to whip no kids, nothing like that, but I am going to tell them when they’re wrong.”

This isn’t because she’s mean. Rather, she cares a great deal for the children.

“My heart is with the youth here, more so because they’re making so many bad decisions. I was a young mother, but I had a real supportive family even though we lived in the Bronx. A lot of these kids don’t have the support, and so that’s kind of why my heart is with helping them out and trying to get them going the right way.”

Fagan is the owner of a women’s apparel and accessories store, Suit U Now, on South Salina Street on Syracuse’s South Side. The two-year-old store is her first endeavor into entrepreneurship. But most of her involvement in the community comes from her work with youth programs.

Fagan is also the director of the NAACP’s ACT-SO, or Afro-Academic, Cultural Technological and Scientific Olympics in Syracuse. The program affords African-American and Latino youth in Syracuse the opportunity to exhibit their talents and vie for a chance at the national competition. High school students compete in 24 categories, including business/entrepreneurship, painting, chemistry, and filmmaking/video. The awards ceremony was held April 14; winners go on to compete in Orlando, Fla., in July.

From behind the sales desk at her store this spring, Fagan carefully unwrapped medals that were to be presented to the winners, runners-up and honorable mentions at the awards ceremony. As she folded them into envelopes, she recalled a life of unintentional devotion to youth.

“I had a big family, so I had a lot of nieces and nephews. I still have good contact, a good rapport with them. If they have a problem they call me … because I never made them feel like they were dumb or didn’t know what they were talking about. Kind of let them figure it out for themselves.” 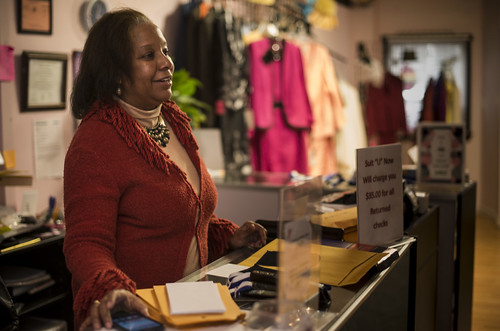 She herself had five kids and for her, being a good mother was “a knack” for her. Fagan’s stepdaughter, also Gwendolyn Fagan, attests to that.

“She’s a good listener, and I think she understands the trouble that kids have or teenagers have or youth have,” Gwen said. “And she doesn’t look at you like you’re bad, you’re in the bad crowd. She tries to redirect that negative energy into something positive.”

Gwen said while her stepmother “spoiled” them, making sure they had everything they needed and got everywhere they needed to go, she also helped them study and instilled the importance of education. When Gwen was in high school, struggling to understand Shakespeare’s “Romeo and Juliet,” Fagan took the time to read it to her and explain as she went along.

Fagan’s friend and fellow ACT-SO board member, Pat Odom, said Fagan looks out for everyone.

“I think we were in Atlanta with the ACT-SO program,” Odom said. “She knows I’m afraid of heights and we had to walk across some bridge and she kept talking to me and saying, ‘Look at me when I’m talking to you,’” and she walked me across the bridge. I didn’t even know I had gone across the bridge. She’s that type of a person, she always looks out for other people.”

Fagan’s family and friends say she was always there to push them on.

“She kind of understood,” Gwen said. “Like, even though my dad would say something like, ‘Oh you’re playing around, not paying attention in class,’ she understood that you can do your homework, you can study and still fail. She understood where I was coming from.”

Fagan’s husband, Preston, said the two of them were opposites when it came to disciplining the kids. Where he would lose his temper, she would do the opposite.

“She doesn’t scream,” he said. “She has a way of reasoning and trying to make sense of what they do. … Gwen will make a wrong a right in some kind of way. If anything is a negative she will make it a positive.”

Her understanding and generosity yielded a home packed with kids — often more than her own. She did not turn away kids who did not have somewhere else to go for one reason or another, whether their family was out of town or they were just plain kicked out.

While she is nurturing, she is also no-nonsense, and it was important to her that her kids understand the value of working for what they want.

“Kids seem like they want things so fast, they don’t want to work for it. And we tend to spoil them.”

When they were younger, she says her kids could buy $100 sneakers, but they had to raise half the money on their own, with jobs, doing chores or babysitting. “So it’s not like they didn’t have, but they had to learn to work for it.”

Fagan says too often she sees parents spoiling their kids with material things because they want them to have what the parents missed out on growing up, and it becomes excessive. In her own family she finds herself reminding her children to reel it in when it comes to spending on their families.

So take off that gold chain and take those sneakers off because I know she didn’t give them to you if she don’t give you nothing, and you don’t want nothing from her!’

“He had to laugh and say, ‘OK, I got it.’ ‘Now go apologize!’ So there’s a way you can get around to kids and make it click, you know, without yelling and screaming at them.”

She also sees a lot of parents who are afraid of their kids when they’re involved in drugs or gangs. She believes instilling respect for their parents and elders needs to be done at a young age, a belief from her own experience as a mother and her long history of working with kids. 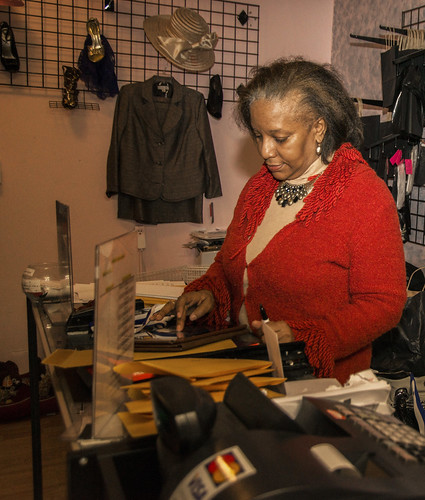 Until a few years ago, Fagan had a career of jobs in insurance. The last time she was laid off she decided she was through with the industry. Around that time she had a dream in which the spirit of God gave her a vision to start her business, even giving her the name, Suit U Now. With an MBA under her belt, she started the new endeavor. But working and taking care of her family was never all she devoted her time to in the community.

For 26 years, after moving to Syracuse, Fagan was a cheerleader coordinator for the Pop Warner Sherman Park Football Association. When she started, she knew nothing about cheerleading, so she read up on it in books and employed the help of adult cheerleaders she knew.

“She always says where there’s a will there’s a way,” Odom said. “I think that’s part of her philosophy. If somebody’s got a problem and she can work it out she’ll try to do the best she can or she’ll try to find someone who can do that.”

For years she developed different age groups of cheerleaders for the extracurricular football program for kids and teens, and by the time she retired there were 4-year-olds on the sidelines cheering on their preschool counterparts.

During that time she also became the director of the Syracuse NAACP’s Youth Chapter and was on the board for ACT-SO. When the previous director of ACT-SO retired from the position, Fagan took over, and then started to plan and launch Suit U Now.

She remains as busy as ever, between her NAACP work, her business, and singing for the choir and praise team at the People’s A.M.E. Zion Church. Instead of five kids at home, she and her husband have the occasional grandchildren stay over, and their newest baby, Bu-buh, a 6-month-old dog.

Fagan is always in touch with her kids and grandkids, staying as close and involved as possible. In terms of following in her footsteps she says her kids haven’t quite reached her level yet.

“They don’t do a lot of volunteering and stuff like that. … They work and they’re good and they take care of their family, but I don’ think, they’re not like how I want or think they should do, give back. I don’t think it’s hit them yet.”

Volunteering, helping people, is not something she thinks can or should be forced. Not for herself, anyway.

“I never thought about going into a profession with kids, you know. I think maybe I should have gone into teaching or something like that. But I don’t know if I’d like doing it for a job. I think I like doing it because I want to do it.”