The theme of this year’s conference was “Youth, Drugs, Violence and Gangs: Global, national and local challenges.” Panel discussions covered issues such as developing peaceful learning environments, group building, education in detention centers and reintegrating prisoners into the community.

“It is one of the few places activists, academics, grad students and members of the community can get together and talk about issues that affect us all,” said Dr. Barron Boyd, Le Moyne’s director of Peace and Global Studies.

The event’s keynote speaker was Onondaga County Human Rights Commissioner Julius Edwards. A graduate of Corcoran High School, Edwards hoped to inspire people to think not just with their brain but also their heart.

“Solutions require deep thought, the imagination of innovation, and the depth of compassion and love,” he said before his speech. 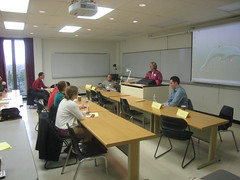 Edwards also said that he felt growing up on the South Side had shaped him and prepared him for his career.

“The South Side provided me with the sort of backdrop for understanding, appreciating and embracing the struggle,” he said.

Just as the conferences theme stated local and global issues were discussed. Hakim M. A. Williams, a doctoral student at Columbia University’s Teachers College, talked of his upcoming research project in his native Trinidad and Tobago, where he will be studying violence in postcolonial schools.

“My end goal is to create a program that will help,” he said.

As hopeful as speakers were, they were also well aware of how tough it is to make the world a more peaceful place.

“Anything we come up with is at best a partial solution,” said Anya Stranger, during the “Building Peaceful Schools” panel. But Stranger stressed that this only meant that everyone needed to work harder to come up with ideas that would work.

— Story by Bryan Anthony Hood, Roving Reporter for The Stand