Businesses could benefit from potential installation of security cameras

Corcoran High School senior Delores Woody, who lives near the intersection of Midland Avenue and West Colvin Street, lost three family members to violent crime: two shootings and one stabbing. She’s heard that surveillance cameras were installed on the West Side, and thinks it could help deter crime on the South Side, too.

“That would work. I would support it, because I recently lost my own cousin to it, and my other one, here. Right there, at that pole, and the other one down here,” said Woody, pointing to the intersection, and then pointing a few hundred feet away. Woody said she also lost her uncle to a shooting in the neighborhood. 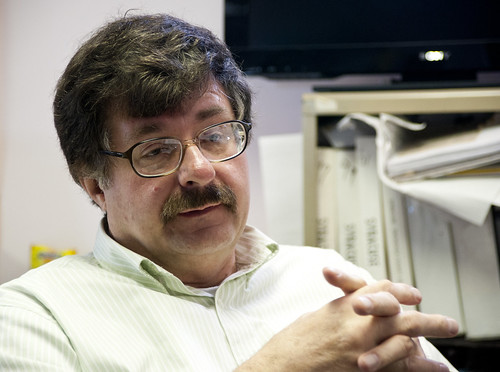 Richard Puchalski, the executive director of Syracuse United Neighbors, supports the installation of surveillance cameras in the Syracuse area. -- Photo by Cheryl Mowczan

“A day doesn’t go by without people seeing something like that in the media,” Puchalski said. Before a Common Council vote in November of 2011, Puchalski collected more than 350 signatures in favor of installing surveillance cameras on the Near Westside. “People are concerned, and rightly so.”

Puchalski has recently met with Syracuse Police Chief Frank Fowler and other law enforcement officials to discuss installing cameras on the South Side. The cameras have helped lower gun violence and other types of crime on the Near Westside, he said, because authorities can monitor multiple locations on computer screens and dispatch police officials more quickly.

Woody, who has heard of a recent shooting on the East Side of Syracuse, said cameras should be installed there, too.

On Nov. 2, the Common Council unanimously approved spending $125,000 in federal stimulus money to install nine cameras at intersections between South Geddes and Oswego streets, an area on the Near Westside that accounts for nearly one-quarter of the city’s gunshot incidents, according to Syracuse police. Police used an $84,400 state grant to purchase five cameras for the Pioneer Homes housing project on the South Side. They should be installed sometime in May, Puchalski said.

“With the amount of gun violence, shots fired — our government needs to provide a sense of safety,” Puchalski said. “In some cities, their cameras are much more up there in terms of technology than we’re getting.” He cited cameras that can pinpoint the direction from which a shot is fired in cities like Rochester and Buffalo.

Sgt. Tom Connellan of the Syracuse police said South Side camera locations haven’t been determined, adding that too many streets in the area have high crime rates. Police are canvassing the area and seeking community input, noting specific streets with frequent gunfire reports.

Philip Prehn, a senior staff organizer at Syracuse United Neighbors, met with Fowler last November and they came up with a list of about 20 intersections with especially high crime rates.

“The ones we have been focusing most recently on in the South Side, we’re concerned about Midland and Colvin. And Midland and Ostrander,” Prehn said. 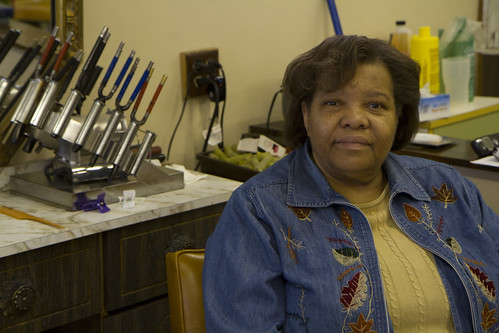 Anna Morris, owner of Anna's Beauty Salon at 430 W. Colvin St. in Syracuse. Morris says she hopes cameras are installed at the corner of Midland Avenue and Colvin, where her shop is located, as a deterrent to crime. -- Photo by Steve Davis

Anna Morris, owner of Anna’s Beauty Salon at 430 W. Colvin St., said the Midland and Colvin intersection has been a high-risk area over the years. She does not see a disadvantage in installing cameras in the neighborhood where she has lived since 1982. If you’re not doing anything illegal, having cameras around should not make a difference to you, she said.

Response to installing surveillance cameras as a crime-prevention tool has been positive, according to an informal police survey of more than 200 residents on the Near Westside conducted before November’s Common Council vote. More than 90 percent approved of the cameras as a crime-prevention tool, and more than 80 percent said they would feel safer, according to a write-up submitted to Syracuse.com by Mayor Stephanie Miner and Fowler.

Larceny is the most prominent crime on the South Side, with 169 incidents reported between July and September of 2011. The most larcenies, 13, occurred on South Salina Street. The street also accounts for the highest number of burglaries — seven — compared to other streets on the South Side. Midland Avenue – one of the streets in the high-risk area where Woody lost her cousins and uncle — reported nine incidents of aggravated assault, the third most common type of crime in the South Side.

Cameras are becoming a norm across the country, said Morris, citing banks and grocery stores as examples of places where they are commonly installed to prevent crimes such as theft.

“In the society that we’re in today, it works as a form of information,” she said. “If something goes on, the most important thing is that you are watched and you can, you know, get caught. At this point, I see the advantage of it.”

* Update made to story from print issue: Correct name of the Owner of Anna’s Beauty Salon is Anna Morris