The Hanging Gardens of Babylon, attributed to king Nebuchadnezzar II, were one of the Seven Wonders of the Ancient World. If the Rev. Craig French gets his way, Syracuse’s South Side could be seeing a modern version of the gardens, which were purportedly built in the 6th century BC.

French, the lead pastor of the University United Methodist Church, said it would be “cost-effective” to turn the elevated portion of the Interstate 81 highway into an aerial green space modeled after the High Line, a municipal park constructed on a rail line soaring above street level on Manhattan’s West Side. 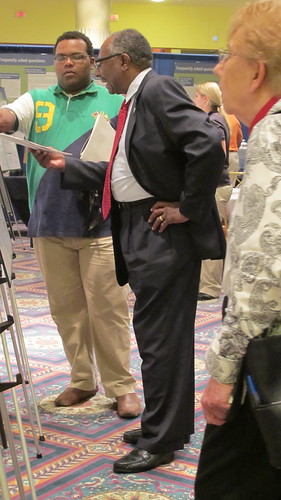 Common Council President Van Robinson reviews residents' visions for the future of I-81 submitted at past public meetings during the I-81 Challenge meeting held May 21 at the OnCenter.

Pastor French first learned about the High Line park from his son, who used to live in New York City before moving to San Francisco. “An elevated park with social amenities could unite the whole community, redressing the schism brought onto it by the I-81 viaduct,” Pastor French said.

A June 5, 2011, article published in The New York Times, quotes New York Mayor as saying that the High Line has revitalized a city district and generated $2 billion in private investment surrounding the park. The mayor added that the redevelopment has created roughly 12,000 jobs in the area on top of 8,000 construction jobs.

According to the High Line’s website, the elevated greenway is one-mile long and receives more than four million visitors annually, who go there for activities such as picnicking, sunbathing, watching art displays and patronizing food vendors and a coffee shop.

Pastor French was one of the several hundreds of city residents in attendance at the I-81 Third Public Meeting held in the OnCenter Ballroom on May 21. The New York State Department of Transportation (NYSDOT) and the Syracuse Metropolitan Transportation Council (SMTC) called the meeting as part of the official decision-making process on the ultimate fate of the interstate, a process that they have billed as the I-81 Challenge.

I-81 will reach the end of its lifespan in 2017 and a firm decision about what alternative to pursue in this regard is expected in 2015.

The Director of Communications at NYSDOT, Beau Duffy, said at the event that highway technical staff have reduced the choice to two basic alternatives. The first one being turning Almond Street, which runs below the I-81 viaduct, into a boulevard with six lanes. The second is to replace the current elevated highway portion with a brand new aerial portion.

Tom Law, who works part-time at Le Moyne College, favors the second strategy. He worries about the Bates effect, named after the Bates Motel in Alfred Hitchcock’s iconic movie “Psycho.” The Bates Motel went practically out of business after the main highway was rerouted, becoming a lodging too remote to attract customers.

If I-81 traffic is diverted to the I-481 loop around Syracuse, to accommodate the Almond Street boulevard, Law senses that numerous businesses — including Destiny USA — along I-81 would see decreased business. He cited the case of a gas station on 7th North Street, which, he said, invested $2 million more than five years ago. “The station would be hurt badly because the truck drivers won’t stop there anymore, and the investment would be lost,” Law said. 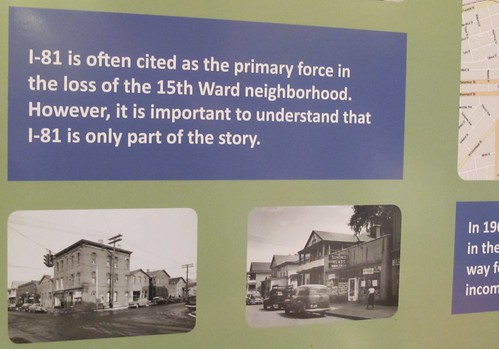 The meeting opened with displays on the history of I-81, including how the construction attributed to the break up of Syracuse's historic 15th Ward.

The state fact sheets report that the I-81 corridor in Syracuse comprises 12 miles, of which 1.4 make up the viaduct section. The viaduct borders eight blocks in the Pioneer Homes neighborhood of the South Side. Paula Benway, with NYSDOT consultant Stantec, said that “an estimate of 0.8 miles for the length of the viaduct bordering the South Side is about right.”

According to the same fact sheets, the viaduct crosses 18 city streets, blocking most of them. Furthermore, the construction of the I-81 elevated portion in the ’60s divided Pioneer Homes into two.

“The I-81 viaduct is a monstrous structure that obliterated a predominantly African-American community and that makes it harder for people who live, work and love Syracuse to get through, from one side of the viaduct to the other,” Pastor French said. “The I-81 viaduct should be torn down if the elevated park option isn’t approved.

“Otherwise, it should be repurposed.”

— Article by Miguel Balbuena, Community Correspondent for The Stand

Some of ‘Your Visions’ displayed at the meeting 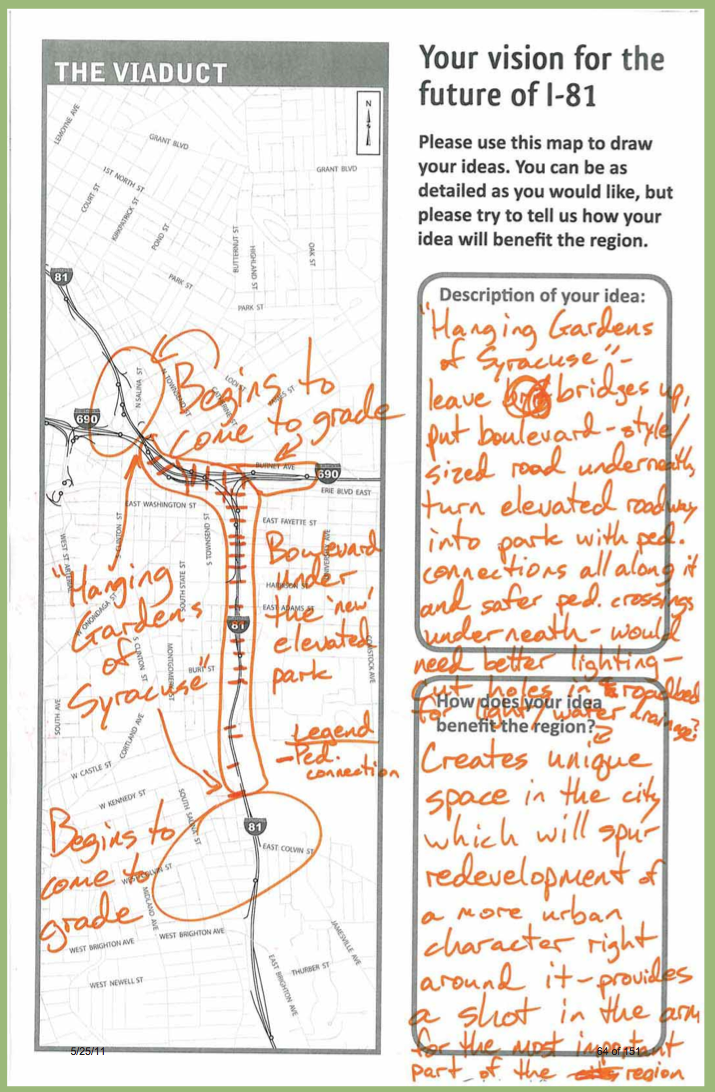 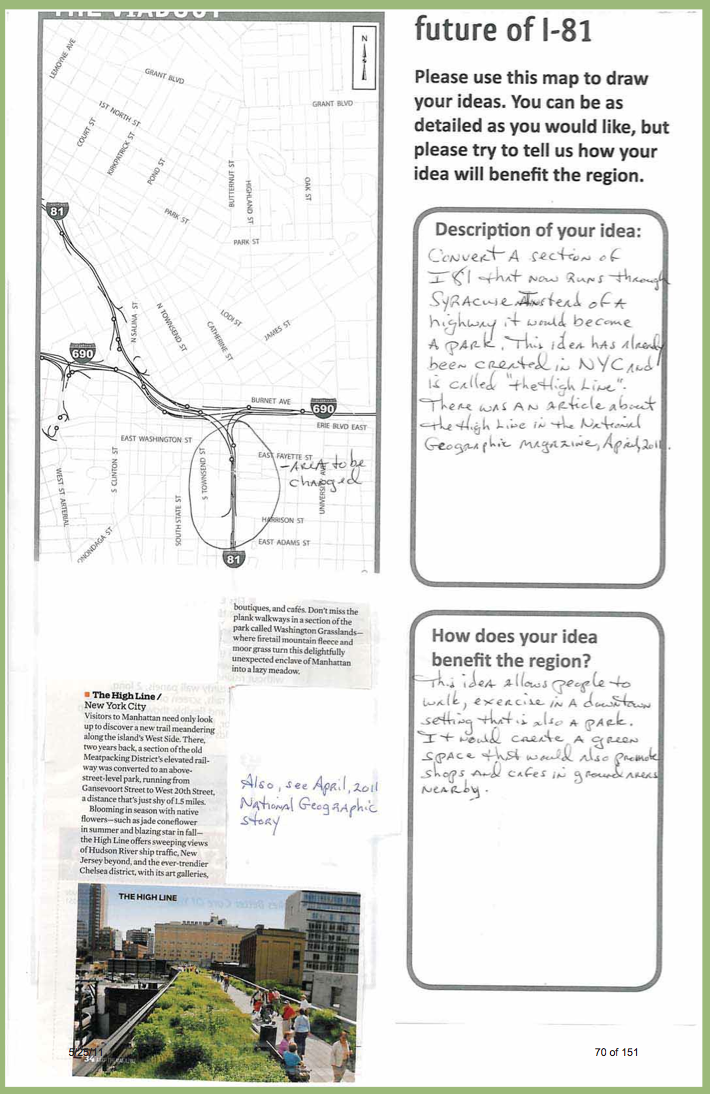 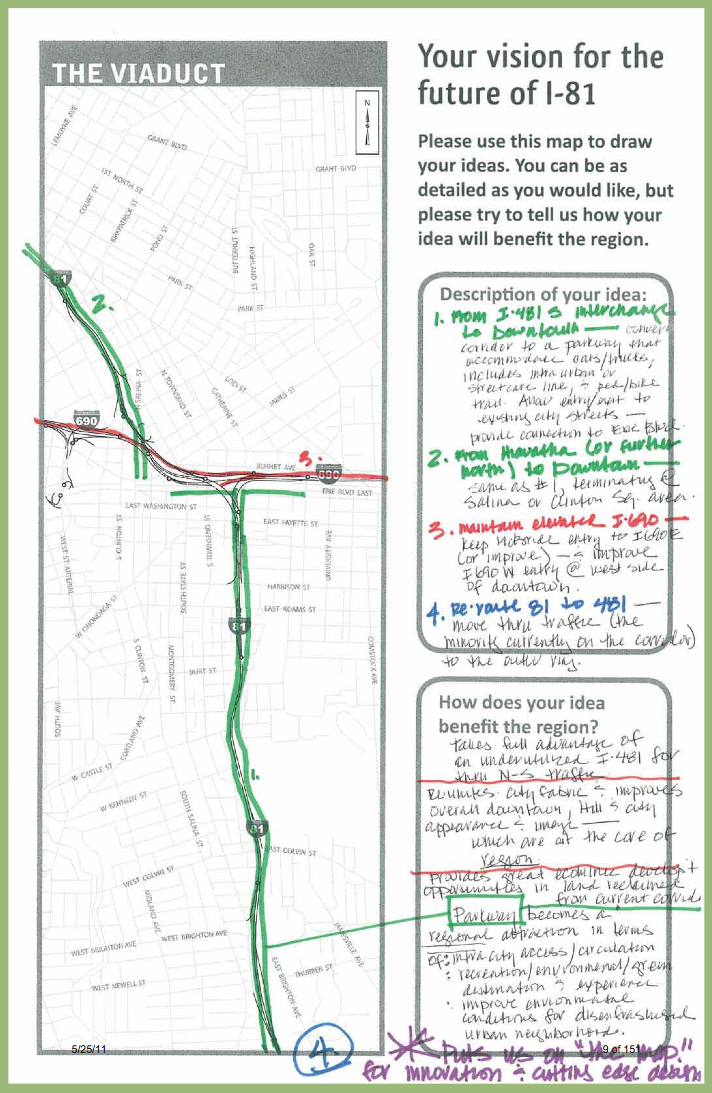 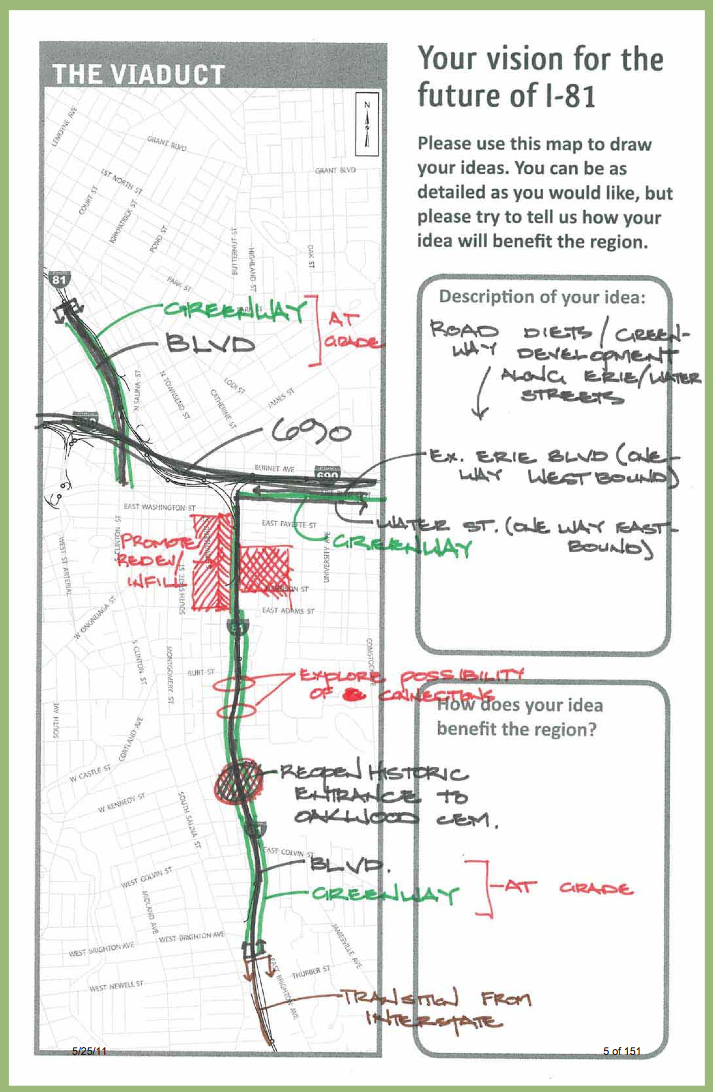