A crowd of about 200 people, brought together by a new community organization, issued a call Monday, April 4, for economic justice and a renewed commitment to civil rights. Invoking the name and legacy of the Rev. Dr. Martin Luther King Jr., the group filled the auditorium in a school named for the civil rights leader, on the 43rd anniversary of his assassination.

CNY-Defense, a coalition of community organizations, students, teachers and labor unions that formed in March in response to the nation’s economic and political climate, organized the rally. Maureen Curtin, an English professor at SUNY Oswego and a leading member of CNY-Defense, said the group held its first protest in March to show solidarity with protesters in Wisconsin. Curtin says the organization calls for support of collective bargaining, investment in education, enforcement of living wages and limits to corporate power and influence in the political process.

“We see what we’re doing as part of a larger national movement to challenge what we see as class warfare,” Curtin said.

At Monday’s event, sign wielding parents, teachers, students and community members protested against education cuts and the disparity of wealth in the United States. They also enjoyed performances by the MLK Elementary School Gospel Choir as well as local poets, Jasmine Price and Jackie Warren-Moore. Presenters including, the Rev. Kevin Agee, of the Hopps Memorial C.M.E Church, and Helen Hudson, founder of Mothers Against Gun Violence, spoke to the legacy of Dr. King and lamented that after 43 years, his call for economic justice remains unanswered.

Agee’s voice rattled with passion and fury as he read from King’s 1963 “I Have a Dream Speech.” “So we have come to cash this check — a check that will give us upon demand the riches of freedom and the security of justice,” Agee said, quoting King.

“Some 43 years after Dr. King’s assassination, what a travesty it is to say that check is still marked insufficient funds.”

The April 4 event, though a commemoration of Dr. King’s life and work, was also the coalition’s direct response to the passage of the New York State Budget that will cut $1.2 billion in education funding and the proposal to cut 500 education jobs in the Syracuse City School District.

“The idea that education cuts could get in the way of any of these kids going to college should wrack all of us,” said David Van Arsdale, a sociology professor at Onondaga Community College and the event’s emcee, following a three-song performance by the MLK Gospel Choir. 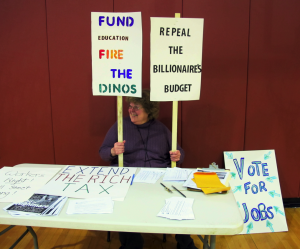 At the back of the auditorium, flanked by two home-made protest signs, sat Barbara Kirkpatrick, legislative vice president of New York State’s National Organization for Women. She invited attendees to sign pre-printed letters to Senator Valesky and Assemblyman Roberts.

“One of the things we want to accomplish is to convince some of the guys that voted for this budget that it wasn’t a smart idea,” Kirkpatrick said. “And convince them that they will suffer politically.”

Diana Brown, a Syracuse resident with a grandson that attends Dr. King School, signed the petitions.

“I hope they find a better way than what they’re doing,” Brown said. “Kids are running wild in the streets and now they’re cutting everything.”

Helen Hudson says she hopes the event will educate young people and inspire older people out of complacency. “Dr. King lost his life fighting for workers’ rights. And we’re in the 21st century, fighting for the same issues,” Hudson said. “A lot of things were gained, but we’ve lost them. And now we’re fighting to bring them back.”

Curtin and Van Arsdale say their hope is that the rally will build solidarity among disparate organizations and propel individuals to be more active in the political process.

“One of the most important elements of a demonstration like this is to build multinational unity of students, workers and the unemployed,” said Derek Ford, an editor for the Liberation News, a member of the CNY-Defense coalition. He says the group uses events like this as an organizational tool in the hope that guests will transform from “lazy participants to fighters.”

Curtin says the group hopes to invite more voices to “speak up and speak out.” She says those interested should attend the CNY-Defense follow-up organization meeting, which will be held at 3 p.m. April 10 at the Plymouth Congregational United Church of Christ, 232 E. Onondaga St.