Ann Parker perches on the edge of the red couch in her living room, leaning close — inches from her visitor’s face. Her eyes narrow. She leans in, closer still. It seems their noses might touch. Her eyes water. Is she going to cry, or curse? Now, her visitor — at first engaged — pulls back, concerned, uncomfortable, even a little scared.

Ann Parker speaks. But this is no tongue-lashing. She wants to inspire her visitor, not scare the devil out of her.

“Never doubt you. Always let you know that you can do it, and be willing to try. … Anything you want in this life you can accomplish because you’re speaking to someone that did this,” she said.

A few years ago, Parker was on the radio. And while she no longer has a forum to deliver her message to scores of listeners, she still speaks with emotion about opportunity and success to any person she meets, friend or stranger.

Parker reaches out to everyone – whether it’s someone she meets at the Valley Worship Food Pantry or the Dunbar Center, or an SU student on that red couch who aspires to make a difference in the broadcast industry, as Parker herself did years ago.

Parker, it seems, has never really abandoned her audience, gone “off the air.” She speaks with such sincerity and passion that you would think she was still speaking straight into a microphone.

Parker was one of the first black women to be a radio announcer in Syracuse. She began her career at WOLF, making announcements. There were no spots on the air for women at that time, so she had to sneak in on the heels of her church pastor. It wasn’t an easy ride.

There, she realized that being on the air was her destiny.

“I started to go to the radio station with the pastor. He had a Sunday morning program, so I started to go there, and when he didn’t come I would go there and do the show, so I liked it and so I stayed at it.”

Parker recalls the many struggles she faced as a pioneer, as a woman and a minority.

Rick Wright — a television, radio and film professor at Syracuse University — recalls the mutual surprise that he and Parker had when they first met each other at WOLF. He was a Ph.D. student who was hired to engineer her programming.

“Ann Parker was the first person I saw physically on the air at WOLF,” Wright recalls today. When he walked into the station he was surprised to hear a black woman on the air, just as she was shocked to learn that a black student had an engineering license.

Though she pioneered the industry for black women during the 1970s, she faced obstacles from many people whom she knew very well. “It was difficult for me because a lot of people close to me, they were so envious. … I never thought about it until they showed it to me.” 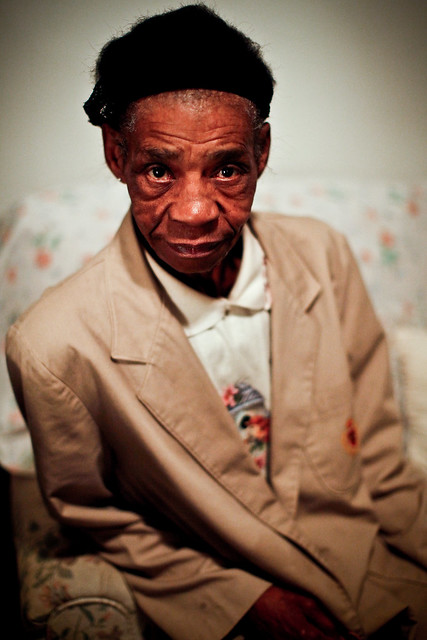 Still, she viewed her success as a means to help others. “Somebody always has to start something in life because this is how people encourage one another.”

Cora Thomas broke into the industry, too. “I respect her and applaud her for being one who paved the way,” Thomas said of Parker. “She would take me to the station and show me how to do things. I would just come and watch her in action … not knowing that eventually one day I would be a radio announcer.”

Thomas recalls what it was like to hear Parker on the air. “She had a delivery that when she spoke, people would listen.”

Her show on WOLF was a mix of Bible, music from local Syracuse groups and the gospel hits of that time, church announcements and news of the community.

That structure was very inspirational, Wright said. “Even at 4, 5, 6 in the morning, people in the community would be listening,” he said.
Parker spent more than 40 years in the industry and worked for several stations, including WNDR, WSOQ, WSIV, and WVOA. Though she is not on the radio today she still carries a message with her that reflects her life experiences.

“To have someone who was an African-American on air, even if they were on air for just 15 minutes or a half-hour or an hour was really a magnificent statement,” Wright said.

Today, Parker does not bask in her accomplishments. She’s too busy spending time with friends from her church or uplifting strangers with a motivational word.

“If you got your mind set on a goal … go for it baby,” Parker tells her recent visitor. “If I could do it, you can do it, and I did it back when it was supposed to have been impossible.

“I was an unusual human being, ’cause if they didn’t see me on radio, they was ’gonna see me in church playing piano.”

Back on the red couch in her living room, Parker now wipes away her tears. Sharing her past with yet another stranger is an emotional roller-coaster, but one that often ends with a cathartic moment. She regains her composure and again looks at her visitor and smiles.

She offers one final piece of advice.

“Just like you fear, do the opposite and be positive about yourself. … Tell yourself, ‘I can do it,’ and never doubt you.”

The guest sitting across the couch from her becomes a new friend and smiles back.