Fed up with renting, one Syracuse woman buys her dream home through Home HeadQuarters

Aishah and Lonnie Jones’ dreams of owning their own property came true with help from Home HeadQuarters Inc., a nonprofit organization that builds new homes and rehabilitates older ones in disrepair. Aishah Jones, a Queens native, moved to Syracuse 17 years ago for its lower cost of living. Five years ago, she took a three-bedroom apartment to share with her husband, son, daughter and two grandchildren. But after calculating that she had spent $55,000 in rent and lacked any equity in the house, she decided the family needed to buy its own place. 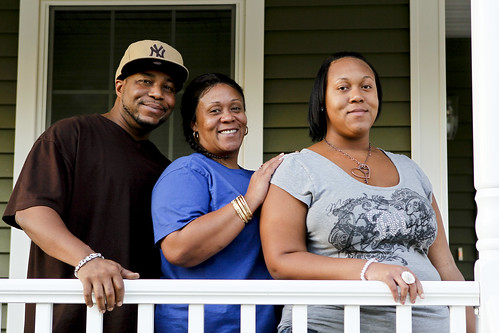 Lonnie and Aishah Jones, left, pose with daughter Khadejah outside their home on Woodland Avenue. Along with Aishah’s son and two grandchildren, the family lives in a home purchased through Home HeadQuarters. -- Photo by Mitchell A. Franz

“The apartment was beautiful, but over time, it became too much money to be paying for something that I’m not owning,” Jones said.

She also said that it was too small and her grandchildren, then 3 and 4, were getting bigger and noisier. Jones decided to look into purchasing a home.

“I went to Home HeadQuarters for the first-time homeowner’s class,” she said.

Later, as she drove through a South Side neighborhood, Jones noticed a partially built home. She learned that it was a project of Home HeadQuarters, but that the nonprofit had already sold it. Luckily for her, the lot next door, 113 Woodland Ave., was still on the market.

“The real estate agent from Home HeadQuarters advised me that they were breaking ground on a house next door, and he said, ‘If you want, you can have the opportunity to purchase it,’” Jones said.

Jones put down a $500 deposit to Home Head- Quarters to secure the lot and then decided to finance the rest through a small bank called Geddes Federal Savings and Loan Association.

Since then, Jones has worked hard to make her new house a home. From her grandsons’ Spiderman-themed bedroom to her husband’s “man cave” in the basement to her prized dark cherry hardwood floors that cover the first floor, she has made the house her own.

“Basically my reason for purchasing the home was for my grandsons and also to leave some type of legacy for my children,” Jones said. “They will always have somewhere to call home.”

Jones’ story is quite common. Home HeadQuarters states it has helped more than 2,100 homebuyers in Central New York since its inception in 1996.

“Money that would have been coming to the city is going to them,” Kessner said. “And the city seems very happy with that arrangement and has been over time.”

The city is also starting to focus on neighborhood preservation, which means rehabilitating not only one lot, but transforming several houses on the same block to enhance the whole neighborhood.

Jones’ residence on Woodland Avenue is a prime example of neighborhood preservation. Home HeadQuarters built her house and the one next door, and has broken ground on another lot. In addition, it owns two lots across the street, which Jones thinks will lead to more homes.

Jones also said she hopes the new units will prompt existing homeowners to take better care of their property.

“I think that’s what Home HeadQuarters is gearing towards, respecting and taking care of your property,” she said. “Have some pride in where you live.”