Prosecutor and Role Model Strives to Achieve Her Dreams

After she graduated from Syracuse University’s College of Law in 1999, Romana Lavalas decided to enter the real world. She said she didn’t care to go back to her parents’ home in Rockland County. But she didn’t have family members in Syracuse to hold her to the city, either.

What kept Lavalas here was a job offer from the local district attorney’s office. That allowed her to stay close to her newfound church family at the Mt. Carmel Seventh-Day Adventist Church at 140 Furman St.

Now more than a decade later, she’s 39, and is still serving the public as a prosecutor. She’s also more involved in her community than ever.

“I have to give her kudos,” said South Side event organizer Mary Nelson. “I can’t believe the commitment she had to her community.” Nelson, who started the South Side’s annual Youth Day Barbeque, also coordinated an anti-violence rally, called “Get Your Kids,” last October, where Lavalas spoke. Her neighborhood is down the street from the South Side. Nelson said Lavalas is a natural because she’s such a people person.

Lavalas is a great role model to everyone, Nelson said. Lavalas shows that with an education and a good role model, anything is possible for any young Syracuse resident, Nelson added. “You’ve got to have those people around you. She’s a role model for all races.”

Lavalas has run as a candidate for City Court judge twice — in 2011 and last November — coming up short despite tenacious campaigning. She said she has wanted to be a judge since she was 7 years old and possessed a strong sense of right and wrong. She took the role of a judge in a play, and wearing those robes made her realize that’s what she wanted to do.

“I was always the child to say ‘That’s not fair!’ And that never left me. I wanted to be the person in the robe settling disputes,” Lavalas said. 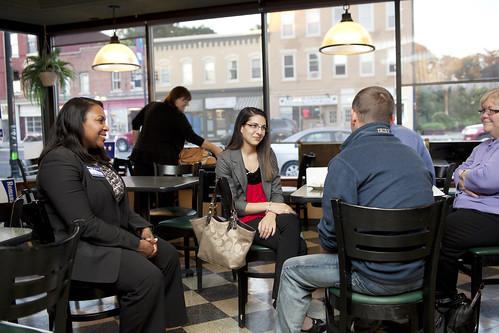 During her first campaign, Lavalas gained a lot of experience and knowledge about Syracuse. She met Nelson and many other community members during her campaign. She ran without any party affiliation. She said she never considered it to be important to her to be a part of one party and preferred to vote as an independent, explaining that being a prosecutor is all about looking for the best possible outcome.

In her second campaign, Lavalas ran on the Republican ticket. She received some party backing, but in a mainly Democratic city, she had to get voters’ attention in different ways.

Nick Decirce, an adviser at MD Financial and Lavalas’ campaign manager, explained how difficult it is to run as a Republican in Syracuse. “You’re pretty much outnumbered, three to one,” he said. “We had to get out there and knock on doors. ‘Here’s Romana. Here’s why she’s a good candidate.’”

Lavalas, who took just two weeks off from her full-time job to prepare for the election, describes the campaigning experience. “It’s hard work. It’s a full-time job,” she said. Yet campaigning comes with built-in rewards, she said, such as meeting people throughout Syracuse and hearing about the issues that are important to each part of the community. “From crime to deer to sidewalks,” she said.

But that was partly the other challenge with running a campaign for a judicial seat. There are rules against talking about certain positions. A judge is supposed to be fair and balanced, one of the reasons Lavalas likes the title so much. Decirce said it posed a challenge to avoid speaking so much about policy and ideas while on the campaign.

Decirce decided to work with Lavalas because of what he considered to be her good character. He believes that shone through on their tours of the South Side, West Side, Near West Side, Valley and almost every other area of Syracuse. And while he projected Lavalas would get about 2,500 votes, she ended up with 4,671, losing to Democrat Mary Anne Doherty, who garnered 10,425 votes. To Decirce, this was a sign Lavalas should keep going.

Lavalas said she is considering running in the future, perhaps for a position on the County Court. She acknowledged that she feels tired from two back-to-back campaigns, and what she wants most right now is to continue the work she’s doing in the DA’s office.

And, Lavalas loves her church community from the South Side. She wants to help the people she calls her church family — the ones she met during law school and the ones she knows now. She said whenever she hears of a local child dreaming of law school, she hands over her cellphone number to keep in touch.

Running for office in a city with so many lifelong residents, Lavalas initially felt like an outsider in the election. But she adapted.

“Living here and growing up here, you have support built in. I’ve had to amass people who have seen me as family.”