These are the words of Jeramie White, who grew up on the tough South Side area of Syracuse and had every circumstance lined up against him. Yet he prevailed and is making a success of his life. 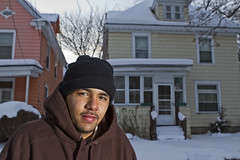 Jeramie White stands outside 120 Mark Ave. where he was raised by his aunt. -- Photo by Mitchell Franz

Today there is a sad fact in America where more African-American males are incarcerated than in college. A study done by experts from Harvard, Columbia and Princeton found that in the inner cities, more than half of all black men don’t even finish high school. Many people can think of a song, television show or movie where a typical “hood environment” affects youth — especially young black males who claim they are essentially raised by the streets.

Songs such as The Game’s, “My Life,” in which Lil Wayne raps, “Dear Lord you done took so many of my people, I’m just wonderin why you haven’t taken my life.” The sad truth is that for many, “My Life” is more than just a song, it’s a true depiction of a vivid reality in which they live. White’s reality was one in which drugs dominated, poverty prevailed, shootings came as no surprise and education was essentially nonexistent. His situation didn’t stop him, though. He is turning his life around, graduating from college and encouraging others to follow him on his path to success.

White is a South Side native. When asked to describe his life growing up, the first word he used was “rough.” White has been shot five times and has seen people killed right before his own eyes starting at a very young age. White describes the environment he lived in as extremely drug-oriented with the majority of people either doing drugs, selling drugs or both. He said he started “husselin” at age 13. This is when he went to “juvie” for the first time and “fell in love” with street life.

By mid-freshman year, White had dropped out of Nottingham High School with no intention of ever furthering his education.

The problem is the streets have an expiration date, and being shot five times, White’s clock was definitely ticking. He had to make a decision and fast. Continuing to live this street life he had become so infatuated with left him two options: end up in jail or dead.

“The idea that we can keep incarcerating and keep incarcerating — pretty soon we’re not going to have a young African-American male population in America. They’re all going to be in prison or dead. One of the two,” said former Sen. John Edwards at the MTV political forum in 2007. Studies found that in 1995, 16 percent of black men in their 20s who did not attend college were in jail or prison by their mid-30s, and 6 in 10 of these black men who had dropped out of school had spent time in prison. Luckily White realized that prison wasn’t his only choice; he could always go back to school, and fortunately he made the right decision. 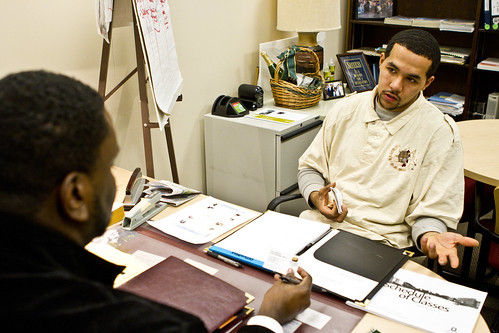 For many kids, going to college is a top priority, but it was apparent that this goal wasn’t a priority in White’s world. This didn’t stop him, though. He received his GED in 2008 and was scheduled to graduate from Onondaga Community College in December 2010. He plans to attend a university. White says he wants to educate youth and help them avoid the mistakes he made.

White believes in leading by example. Going back to school proves to others that there is hope for them. Just because you are born in a certain environment or faced with obstacles many would find impossible to overcome, doesn’t mean there is no hope for you. White believes in himself and has hope for others in his community.

Growing up without a paternal role model had a significant impact on White’s life. “I didn’t have no Obama to look up to; I had hood legends.” He is determined not to let this be a comment he hears from other young people growing up, and he believes education is the way.

“I know what I want in life,” White said. Graduating from college and leaving the life he once knew, White is on the path to achieving his goals. You can come from the worst environment and still achieve something great.

Olivia Harrison is a senior in Ms. Amanda McKenney’s class at Christian Brothers Academy and a South Side resident. If you are a high school student and would like to write for The Stand, contact Ashley Kang at ashley@mysouthsidestand.com.