Program provides seniors with a chance to socialize, exercise and enjoy local activities

Mary Jackson is dressed to the nines every time she steps out of her home. When she is with friends at the Dunbar Center three mornings a week, she always bedazzles in a comely outfit. Jaws drop when her age is revealed – 97. Not only does she have a clean bill of health, she is always wearing high heels. Among the seniors at Dunbar, she is one of the most sprightly, witty and sociable. 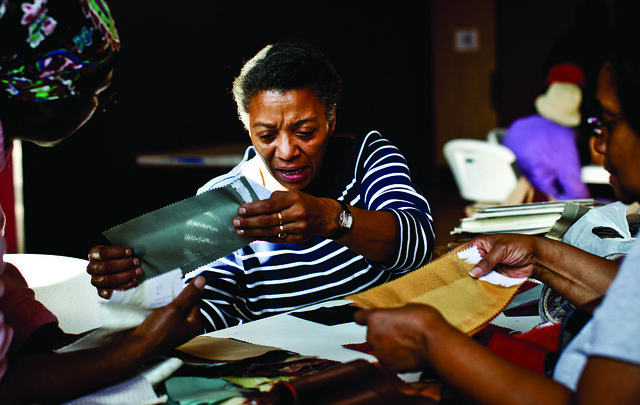 Artresa DeLee, center, and Betty Brandon choose swatches for their next quilt during a meeting with the Dunbar Association’s Neighborhood Advisor Program, known as NAP. -- Photo by Mackenzie Reiss

Jackson’s secret to aging gracefully is getting out of the house as much as possible to socialize with friends. She lives alone and has no access to a car, but she is involved with Dunbar Association’s Neighborhood Advisor Program, known as NAP. It sends a van to pick her up for activities and lunch every Monday, Wednesday and Friday morning.

NAP is a citywide program with locations scattered all over, including the South Side. Seniors are encouraged to bring their family and friends above the age of 60 who may not necessarily live in the area. According to Census 2000, there are 3,839 citizens over the age of 65 on the South Side, making up 18.6 percent of the South Side’s population.

“A majority of the seniors [who come out] live by themselves,” said Coretta Washington, who runs the program. “Sometimes you just can’t rely on the family.”

Along with her colleague Shiann Atuegbu, she visits seniors at their homes to check how they are doing.

The program draws around 25 seniors above the age of 60 together for weekly fitness and sewing classes, bingo, seminars and field trips. The program is funded by the Onondaga County Department of Aging and Youth, so seniors can participate free of charge. Washington brings in speakers every Friday to educate seniors on how to stay independent and well-informed on subjects such as protecting themselves against fraud, how to fill out forms for Medicaid, Social Security or food stamps, how to read food labels or how to make the most out of the heat at home.

The NAP provides seniors with a chance to socialize with peers. Washington recounts that it began two decades ago with the purpose to help seniors maintain financial independence, and stay physically and mentally healthy.

“We give assistance that churches cannot provide,” Washington said. She uses Mary Jackson, who has been attending NAP activities for two decades, as an example.

“I am not like other seniors who stay at home in front of the TV,” Jackson said. “I get crazy staying in my apartment.” 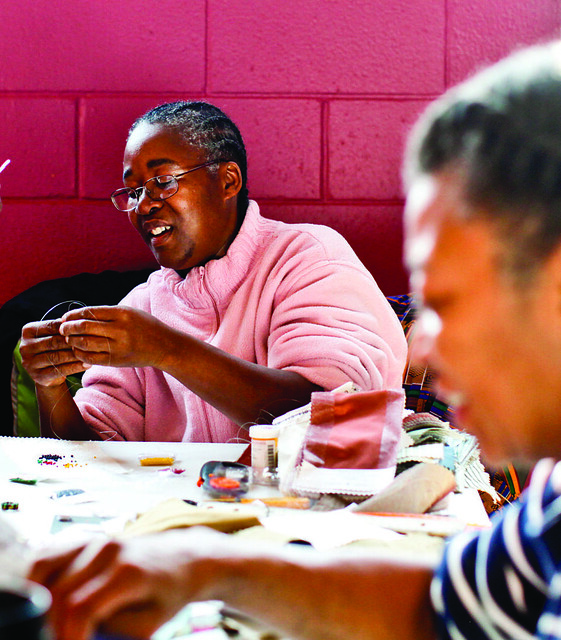 Janet Davis threads a needle to help her with her bead work during a meeting with the Dunbar Association’s Neighborhood Advisor Program, known as NAP. -- Photo by Mackenzie Reiss

She enjoys the socializing aspect the most at NAP. Some seniors leave Dunbar as soon as the activities are over, but Jackson always sticks around to chat. When she noticed one of her peers sitting alone, she went over to talk to her.

Jackson also believes in looking presentable at all times. “Just because you’re aging doesn’t mean you have to let yourself go,” she said.

“I’ve known her for 25 years, and she’s a dresser,” he said. “You should see her at church. I call her Mrs. America. She’s a beautiful lady and moves around better than I do.”

Washington has taken the seniors out for shopping, to plays at Syracuse Stage, and to visit Turning Stone. Recently, Washington took the seniors to the movie “For Colored Girls,” which was requested by one of the senior ladies. The seniors at NAP are predominantly female and black, with only around four to five men.

“I tune them out,” said Willams, joking on being outnumbered by women. “I grew up with four sisters and I was the only boy so I just deal with them.”

Williams participates in the fitness class taught by Bernice Stackhouse, 67, every Monday morning along with around 13 to 15 seniors. It is a one-hour class of aerobics, stretching, ball-throwing exercises, weightlifting, arm and leg lifts, balancing and meditation. Stackhouse finds it challenging in selecting the appropriate exercises that would accommodate a wide age range of 60 to 97. She focuses on exercises that would help the seniors at home, such as balancing. Stackhouse even conducts an exercise where she teaches the seniors the best way to get back up on their feet if they fall.

Annie Rankins, 75, has benefited from the exercises.

“The doctors say [exercising] is good for the moment I get up,” said Rankins. ”When I get up in the morning, I stagger.” She also credits the program with helping her improve her memory.

Stackhouse puts on soft jungle noises in the last 15 minutes of the class for the seniors to meditate.
“It feels like therapy,” Williams said.

Stackhouse explains that this clears the minds of the seniors so they are not constantly consumed by their thoughts. Washington also emphasizes the importance of the fitness class because it is good for seniors who suffer from high blood pressure and arthritis. At the end of each class, Stackhouse takes the weight of each senior. She says there is a steady weight drop in general among the seniors. This can also be credited to the regular NAP activities and extensive advice from seminars on how to eat healthy. The class begins and ends with prayer, usually led by a senior.

“We thank God for allowing what we do at our age,” Stackhouse said.

“She takes no medication and is the model picture of being healthy,” Washington said. “It is a sign of someone benefiting from the program.”