Markita Collins did not have a choice growing up about the role religion and music would play in her life. Her parents made those rules. 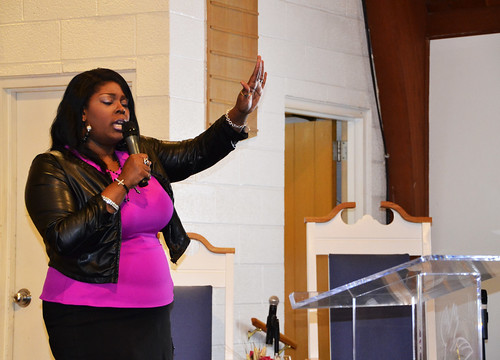 Now 33, Collins has spent almost 30 years combining her love of God and love of singing. She is a gospel singer and leads the singing of worship services as a minister at the New Life Temple of Praise located at 5013 S. Salina St. in Syracuse. Collins just recently started her own radio show “Speak Life with Markita” on Tuesday nights on XCEL Radio and also co-hosts gospel recording artist Marcel Adams’ weekday morning radio show “Marcel in the Morning” on XCEL Radio.

She has one mission in life, she said, and it’s to spread the word of Jesus Christ — particularly through her singing.

“It means everything to her,” said her husband, Shaun Collins, who is a backup singer in the worship group that Collins leads. “She lives and breathes God. For her, it’s an honor to bring people into the presence of God.”

Collins grew up the oldest of three daughters on Midland Avenue on the South Side. Her mother sang in a choir and her father plays bass guitar at the Greater New Testament Missionary Baptist Church at 1121 S. Salina St. 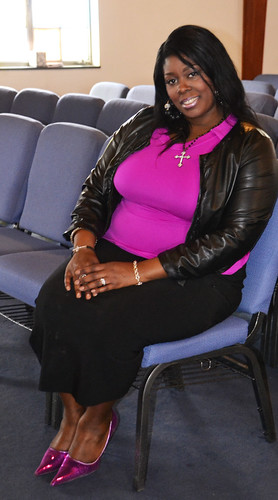 Markita Collins hosts her own radio show and also has an album available on iTunes.  | Ashley Blume, Staff Photo

Sunday was always Collins’ favorite day of the week. Each Sunday morning before church, her family would tune in to the FM 88 radio station to listen to the gospel show from 7 to 9 a.m. They would switch to the “Bobby Jones Radio Show” at 9 a.m. and head to church shortly afterward.

From the age of 4, Collins sang in the choir at her grandfather’s church, the Greater New Testament Missionary Baptist Church, which is just three miles north of the New Life Temple of Praise, where Collins sings now.

The sight of her grandmother singing and the whole church joining and clapping along sealed the deal on Collins’ aspirations for the future. She knew she wanted to be a gospel singer right then. “I love all types of music, but gospel music is definitely my first love,” she said.

As she grew older, Collins broadened a growing singing career, starting out by singing at churches, weddings, corporate events, conferences and more. She feels comfortable singing gospel music in any setting, because the result rarely changes — her listeners say they find her inspiring.

“Her exuberance and love of God comes out when she sings and in everything she does,” said Elton Cadogan, a regular attendee at the New Life Temple of Praise. “She’s been a blessing for this church ever since she and her husband came here.”

Now in her fifth year at New Life Temple, Collins opens the weekly 10 a.m. Sunday worship services with a pair of songs, performing before a congregation of more than 100 people. She sings with a choir of four backup singers — including her husband — and performs with a pianist, percussionist and guitarist throughout the services.

“I enjoy her passion,” said Bashir Bivins, who attended a recent worship service. “It prepares me to get 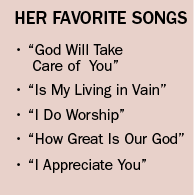 Collins is the mother of five — including one stepchild — and hopes to expand her travels as a singer. She has ventured up and down the East Coast to spread the word of God through her singing. The West Coast is next, she said.

“In order for people to know about Jesus they have to hear me, and not just me but artists across this world,” Collins said.

“In order for people to know who I am outside of my local region and my local city, they have to see me in other places. It’s exciting. It’s fun. It’s a fulfilling life.”