Through his writing, Dale Harp is on a mission to educate youth on making the right choices

When you meet Dale Harp you can’t help but want to pull up a chair and listen to his life story. His demeanor is so warm and inviting you feel you’ve known him your entire life.

Having gone through some rather difficult times in his life, some of which include various stints in jail, Harp wants to use his experiences as a model for young people who may be headed on the wrong path. He wants them to know they have the power to pave a better future. 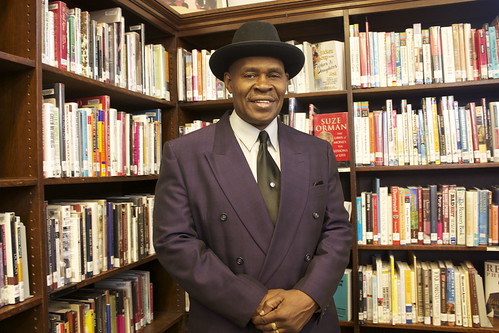 With the release of his first novel, “The Day My Dawgs Ran,” in August of 2011, Harp is determined to enrich the lives of others through the written word about how difficult, yet instructive, life can be.

“I try to tell kids that when you go to jail, you’re walking dead; if you go to the streets, you’re going to get an early grave or 30 years to life,” Harp said about youth who trivialize incarceration rather than take it seriously.

Harp is a Syracuse native and has grown up all over the city. However, it was in the South Side where he spent most of his childhood. It was in his early years that he found himself making wrong decisions that would ultimately bring about his first visit to jail.

“Coming up in school, I used to think that being a tough guy was the way to go,” Harp said about his mentality as a young man. “At 16, I began drinking beer and wine every day.” It was his clouded judgment, sometimes fueled by alcohol and substance abuse, that landed him a four-year sentence at the Elmira Correctional Facility after he broke into a store with two other individuals.

“With any gang out there, you’re going to go down some type of way,” Harp noted about the real dangers of forming such associations. He recognizes that his association with people who were often bad influences didn’t exactly pave the correct path at the time. His childhood friend, KaRon White, who has experienced similar hurdles (and often with Harp), agrees.

“I’ve been through more stuff than most people would go through in three or four lifetimes,” White said. A supporter of Harp and his efforts, White adds that young people today can learn from their mistakes by reading Harp’s book.

“You have to more or less get your bumps and bruises as you go along. Experience can be one of your better bruises.”

Those harsh lessons only helped to inspire Harp to educate those around him—rather than dwell or be angry about his circumstances. He especially wants young men to learn that being a man isn’t defined by how tough or macho you are.

Instead, it’s about realizing the world of opportunity out there and the power behind learning how to practice patience.

“[The book] is to show kids that the same person you’re running down the street with is the same one that will get you killed or put in jail,” Harp says. “I try to instill in some of these kids that in 10 years you’ll be a little bit smarter. In 20, you’ll be a lot more intelligent. And in 30, you’ll have grown to be wiser.”

The idea for “The Day My Dawgs Ran” came about the last time Harp was in jail in 2006. He began thinking what his life would be like if he were incarcerated the rest of his life?

“When I got to jail, I found myself on the same floor that I was on 30 years ago … I couldn’t believe that anybody could tell me I would be back on the same floor,” Harp says about the realization that he wanted to change his life. “When I found myself in there, all I could say was that this was a godsend … I wasn’t just going to do the time, I was going to write a book.”

Harp began to teach himself how to type using a typing software. Often starting at midnight, he would write well into the morning. He averaged about four pages a night, and on Nov. 18, 2006, after coming into work one day, he realized he was done with the book. 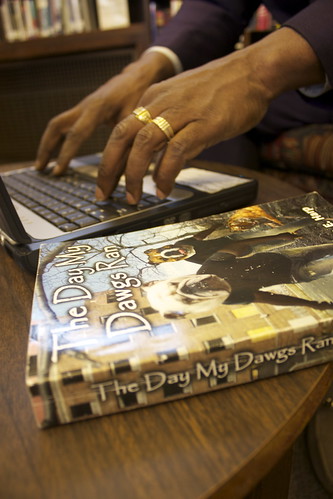 “When I finished typing up the pages, it was 289 pages,” Harp said. “When the book came out it was 401 pages.” In the months and years to follow Harp effortlessly tried to get the book a publishing deal. Eventually Harp discovered that through a private printing company, distributing the novel himself was the preferred way. He’s still hopeful that a publishing deal is in the near future.

Friend and former co-worker Steve Bodnar, who worked with Harp at what used to be New Venture Gear Chrysler (and was eventually sold to Magna International Inc.), finds Harp’s mission to be inspiring and hopefully useful for the many young people out there who may be taking a wrong turn.

“It puts everything in perspective as far as one person’s view of how and why things happened,” Bodnar said. “The book lets you know, maybe scare you in a sense … that crime is not the answer.” Bodnar has read the book himself and even given a copy to a friend he believed could use it as a guide to solving his troubles. And despite not working together anymore, Bodnar continues to be proud and motivated by Harp’s passionate work.

“He’s dedicated to his faith and a person that is always giving back to society for what he’s gone through … He’s not  looking for handouts, he wants to do it the right way. He’s an all around gentleman.”

Harp, humble about his efforts and always optimistic about what the future, hopes young people will relate to him through his novel.
“My mission is to give kids something better to do,” Harp said, “and what better person to show you how to
do that than someone who’s been through it themselves.”

His life purpose, as he says, is best described through a metaphor.

“You could lead a horse to water but you can’t make him drink. God is leading us to the water, but he can’t make us drink. It’s our jobs to tell kids, ‘Do something positive,’” Harp said. “You can’t make them do it, but you can tell them.” And his writing is doing just that.