South Side Church Deacon Gives Back to His Home Community

Bobby Hudgins hasn’t lived on the South Side since 1997. But it’s still home.

“Home” is New Hope Missionary Baptist Church on West Lafayette Avenue, a church he’s attended since 1973.
“We’ve got roots here,” he said of himself and his wife, Mary, “so we keep coming here every Sunday morning.” 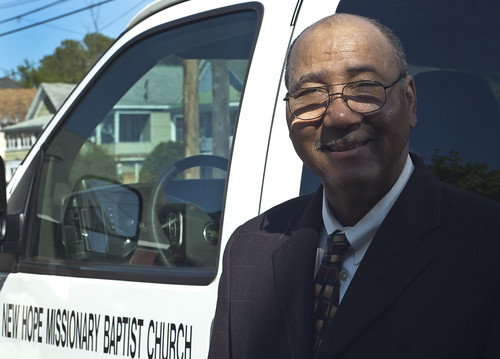 Hudgins is chairman of the deacon board at the church, and he drives the church van on Sundays to pick up parishioners who need a lift. He forms closer connections with church members that way.

“When you’re driving you get to know people, and talk to them, and I enjoy it,” he said.

One Sunday last spring, for instance, he learned that one parishioner, Louise Rawlinson, is from Savannah, Ga., near Mary’s hometown.

Rawlinson has been going to the church for six years. She said she depends on the van service.

“It means a lot to me. I don’t have any transportation otherwise, and if the van didn’t pick me up it would be tough,” she said. “Except somebody else might be coming my way at the time. They may pick me up, but this picks me up on time. It’s convenient.”

One of his favorite memories was June of 2011, when he drove 12 or 13 people — there are usually just a few passengers on an average Sunday — on an annual trip to a church in Rochester.

“When you’re driving for three hours, you get to open up more. When people are inside the church sometimes they don’t open up,” he said.

The passengers are from all around Syracuse, not just the South Side.

Among Hudgins’ other duties as a deacon: serving communion, attending Bible study, and visiting the sick. During the week he works for Gianelli Sausage. On Sundays he gets to church two and a half hours early to take out the van.

“It’s one way of giving back, because so many people have helped me in so many ways,” he said. “One way I can give back is by giving up some of my time.”

Mary Hudgins said she was hesitant about Bobby becoming a deacon in 1994, but now she’s glad.

“Now that he is a deacon I’ve moved more toward him now, and I support him, and I like what he’s doing because I like the change I’ve seen in him, because I have a lot more respect for him than I did when we were younger,” she said. “He’s more settled, a much more settled gentleman, a mature, settled gentleman.”

“I wasn’t always Deacon Hudgins,” he says. “Like a lot of young people I did things that I shouldn’t have done, and a lot of people sat me down and talked to me and kind of made me see that what I was doing wasn’t right. They kind of helped me out. I’m just returning the favor.”