When you walk into the office of the Dunbar Association’s new executive director, Julius Edwards, you will see a man grinning from ear to ear. As someone who understands the impact Dunbar can have on a community, he has an open-door policy. With the doors wide open, people flutter in to shake his hand, set up business meetings and just say hello. 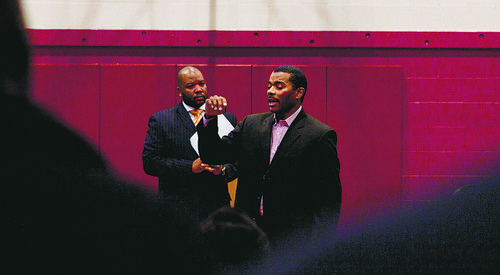 Edwards exits the room briefly to fix his tie. He is preparing for the open house meeting he hopes will be the beginning of the revitalization of a company that once offered him food when his family was out of groceries and hosted sports activities, like basketball, that kept him grounded.

It was the recreational activities coupled with the family help programs and services, like food pantries, that helped to keep the black community in Syracuse unified and focused. When the open house began Feb. 9, the room was packed with people ready to hear what the Dunbar’s representatives had to say.

Steve Williams, the board president of Dunbar, was the first person to speak. Williams quickly began to encourage people to take charge in the future of the organization.

“We always think somebody else will do it,” Williams said. “I am looking at a room full of somebody elses. Dunbar needs your support, physically, mentally, financially,” he added.

Lack of finances is one of the main problems chipping away at the organization. Last October, Dunbar lost more than $200,000 in United Way funding, which as of July has dwindled completely.

The organization’s representatives refuse to let finances get in the way of Dunbar’s progress. 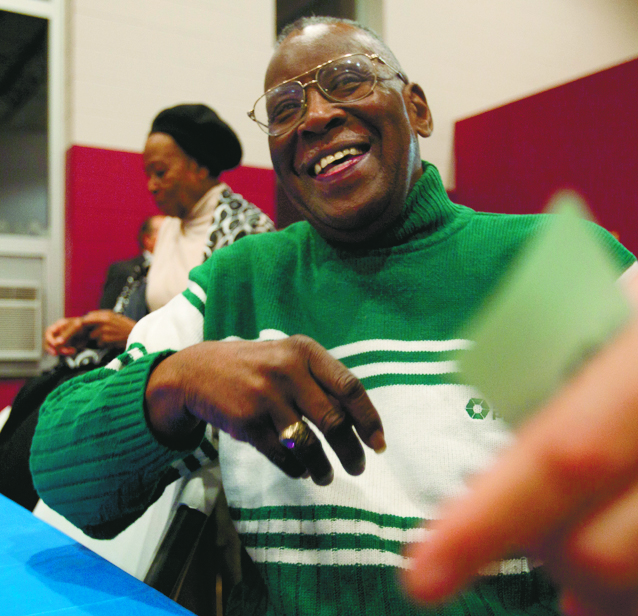 > Manny Breland attends the open house at Dunbar, which he credits for his success. -- Allison Milligan,

“We as a community can’t afford to think Dunbar is going anywhere,” Edwards said.

When the news of a struggling Dunbar got out, a group of seniors — “The Friends of Dunbar” — came together to support the organization. To testify about why Syracuse just couldn’t afford to let Dunbar go, Edwards called on the friends of Dunbar to share stories of how the not-for-profit company changed their lives.

One of the friends is Manny Breland. He said Dunbar allowed him to overcome obstacles such as racism, which helped him become the first African American from the Syracuse area to receive an athletic scholarship to Syracuse University, and eventually thefirst black varsity basketball coach hired in Syracuse, at Central High School. He later was the principal there.

“It all goes back to me here at Dunbar,” Breland said, attributing his success to mentors he had at Dunbar. “If I wasn’t here, I would probably be downtown trying to get into parking meters.”

To ensure others have the same access to such role models, Edwards is developing plans to get Dunbar the funds needed to thrive. Edwards said one of his main priorities will be to make stronger connections with different businesses in the community, including SU.

“Dunbar wouldn’t be what it is if it wasn’t for SU students that met Jimmy LaGrin,” Edwards said. “Somehow we lost that connection.”

In 1918, LaGrin, an ex-convict, realized there was a growing amount of discrimination in Syracuse. In an effort to keep the youth out of criminal activity, he created a recreational program held at the A.M.E. Zion Church. LaGrin connected with SU students who were also members of The Paul Lawrence Dunbar Society.

Almost a century later, Edwards is looking to rekindle the relationship with SU students. Edwards said one way Dunbar can unite with the university is by allowing master’s students to intern for Dunbar, serving as its program developers, researchers and data collectors.

This will help Dunbar to strengthen its business model, Edwards said.

The company has also started fundraising. According to Patrice Chang, who is on Dunbar’s board of directors, the company is collaborating with the Southwest Community Center to create the Aim High and Achieve Program. Chang said the program launched a capital campaign in March 2011 with a telethon. The goal of the campaign is to raise $1 million to sustain community programs designed to enhance educational support, academic growth and the overall youth development.

Edwards said Dunbar will continue to find ways to help the not-for-profit company maximize its revenue and remain a staple in the Syracuse community.