When Deraux Branch looks up from his small 8-and-a-half by 6-inch book, he sees the pupils of about 26 eyes staring back at him. One would think that from the second floor of the triangular building on the corner of West Genesee Street, these eyes could be easily distracted. Surrounding them are the sounds of cars screeching, sirens blaring and music booming. The sweet aroma of honey barbecue from the restaurant across the street entices them. 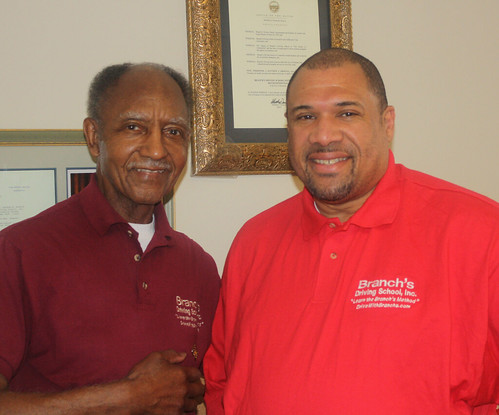 But what Deraux says is louder and bolder than the distractions from the outside world. “Fifteen-thousand-dollars,” he says. “That’s the cost of getting a DWI.”

Lasting Through the Years

Branch’s Driving School was founded in 1963. Nearly 50 years later, it’s a business that thrives in the midst of the city’s economic ups and downs. It’s also one of the few minority-owned family businesses from the original 15th Ward to survive urban renewal. “It’s a milestone that most businesses try to achieve,” said Deraux Branch, the president of the driving school. He left his banking job in Maryland in 1982 when his father, Andrew, became sick and could not maintain the business.

“He dropped everything in Maryland,” said Della Bullock, recalling her brother stepping in as a reason the business has been around for many years. “My father started the business, and it was on decline. When my mother asked, as moms do … sons do what moms say, and son came home,” Deraux said.

As the school’s founder, Andrew acknowledges that the family’s success is due in part because it serves a larger community. “The main business in our community, black community so to speak, would be barber shops and beauty parlors, and those types of things, a couple of restaurants, that’s what we had.”
Night clubs, barber shops and beauty salons decorated streets that now house many of the tall buildings and parking lots of downtown Syracuse.

Andrew credits his mother for the inspiration to start the family business. “My first student was my mom, and I taught her how to drive,” Andrew said. “That was very difficult, very challenging, but very good, because that’s where I got my start from. That’s where I learned how to do certain things — from her.”

Branch’s Driving School has done what many businesses have not. It has allowed the teacher to become the student. A dream that started from a son teaching his mother to drive, has now enabled a son to step in and help his father.

Deraux admits the growth of the driving school has not come without sacrifice. He says he doesn’t take an income from the business, explaining that a salary would be used to buy a new vehicle or hire a new full-time worker. He says by not taking a salary, he doesn’t lay off people and yet he is still employed.

“I want to drive, and I want to use my friend’s car. I go somewhere that’s very convenient … because next year, I want to be off campus,” said 19-year-old driving student ChengYees Hou.

Hou is from China and hopes taking classes at Branch’s Driving School will help him get the green light to a New York state driver’s license.

Hou is among more than 300,000 people who have turned to Branch’s Driving School for the skills needed to pass the state’s licensing exam.

“We have people call from Iraq and say make me an appointment. I’m coming for a five-hour class,” Andrew said. “It’s a big deal for me to see how this school has progressed over the years.”

But nearly half-a-century of business and a laundry list of awards are not what he considers to be the business’ most notable accomplishments.

“To actually overcome certain things that have happened in your life is an accomplishment,” he said. “Being around not to spite anyone, but in spite of, that’s what it’s all about.”