The new artistic director of the Paul Robeson Performing Arts Company says it’s all about community. His first project proves it. 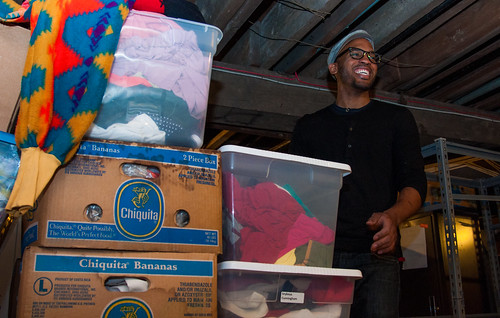 Ryan Johnson-Travis cleans up the basement of the Plymouth Congregational Church, which was holding things from PRPAC from years ago, for a fundraiser. With the help of some other volunteers, Johnson-Travis separated the boxes into piles of what he thought PRPAC could use for shows and also items that PRPAC could sell. | Alyssa Greenberg, Staff Photo

A mother of one of the CNS students contacted Ryan Johnson-Travis, PRPAC’s new artistic director, and asked for his help.

She got it, he recalls.

The cabaret will take place at the Community Folk Art Center this month, on April 19 and 20. It will serve as a fundraiser and will reintroduce PRPAC to the community. Johnson-Travis says he accepted the position as artistic director starting last January because of the opportunity it brings for just this sort of community out-reach. “I think theater is so much more than just props and costume and set design. It’s also about being in the community,” Johnson-Travis said.

In an effort to bring PRPAC back to its original standing in the theater community, its board reached out to Johnson-Travis, 27, who has an infectious smile and a personality to match. Johnson-Travis is an actor, director, writer, musician and adjunct professor.

The Paul Robeson Performing Arts Company was founded in 1982 by William H. Rowland and Roy E. Delemos when they realized opportunities for African- American actors, directors, singers, dancers, technicians and audiences were lacking in Syracuse. Thus, the PRPAC was formed to promote the richness and diversity of African-American culture in the community. The company is named after Paul Robeson, the singer, actor and civil rights activist whose enthusiasm for excellence on stage and social justice in society personified what PRPAC hoped to accomplish. PRPAC’s most notable musical theater productions include “The Wiz,” “From the Cotton Club to Motown” and “What’s Going On — The Musical Genius of Marvin Gaye.”

Johnson-Travis remembers back in 2007 when he first started performing with The Paul Robeson Performing Arts Company.

“When I was a grad student at Syracuse University the administration in PRPAC really opened up their doors to any and everybody who wanted to use their space. So I was in about five or six plays produced by the company, and I also did my one-man show there, as a part of my thesis project.” Within the past two years, the once-thriving community theater company, which presented high-quality theater performances of African- American tradition, had begun to slowly disappear from the Syracuse theater scene, as SU financially and administratively cut ties. “When I graduated to get my MFA in acting, I came back to do an internship at Syracuse Stage, and so I went back to the original space, but the lot was basically vacant,” Johnson-Travis remembers.

PRPAC first pursued Johnson-Travis for the position in 2012; however, he declined because he had plans to move to New York City to pursue his acting career. “I thought about friends of mine who are in New York City and I know what comes along with that is me waiting tables and hoping that I get a shot, somebody sees me. I know what comes along with that is an incredible amount of competition for morsels of roles telling the kind of stories I don’t want to tell. I don’t want to be ‘Suave Man Number 5.’ ”

So when a gig opened up for him to do some acting in Syracuse, he didn’t move to the city. He also started teaching at Colgate University as an adjunct.

“PRPAC saw a show I directed, and they asked me again to meet with them. I knew what the meeting would be about. I decided at that point, this is something I really want to consider because of the work I want to create. I want to be in a community and connect to why the arts are therapeutic,” Johnson-Travis said. “For a lot of people art is healing. I met a mechanic who was a poet. My mom, she’s been a secretary her whole life in some capacity and she’s always written plays. She has like Rubbermaid storage bins full of plays. We used to do plays in the church. So I know people like that exist here,” he explained.

Johnson-Travis has already begun to make some executive decisions. He has restored the board to its traditional role of fundraising. Johnson-Travis says he handles the day-to-day operation. “In terms of PRPAC, I’m doing essentially the role of artistic director but so much more. I’m not doing what an artistic director is meant to. A lot of what I’m doing is director development, marketing, fundraising, everything that a normal non-profit would do, with a team of about seven or eight, I’m doing by myself.”

And he does it without a paycheck, a budget or an official home for the company. However, that doesn’t deter him.

“I thought about a lot of people who intern at For- tune 500s for free. But what they have is they have this
vast amount of experience and they have that nice little line on their resume. Right now, I am essentially investing in myself.”

PRPAC doesn’t have an operating budget because so much of the funding was supported by SU. Johnson- Travis already knows what it’s like not to have a budget.

“When I got to grad school, we didn’t have a theater program but there was an incredible drive to make these plays happen. So we would just bind together. Ten of us would put together plays, and we ended up at national competitions with no budget, no anything.” For PRPAC, he says he will use that same mentality to make productions happen. “We’re basically pulling together this really grassroots movement to what theater is about. It’s not about whipping together a play with a $20,000 investment. So you have clothes in your closet, i.e costumes. So you have a bookshelf that you’re not using, boom, that’s our set.” 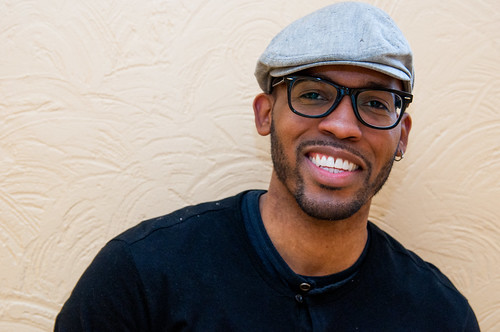 Ryan Johnson-Travis was named artistic director of the Paul Robeson Performing Arts Company earlier this year. Under his direction, the program is beginning to thrive. | Alyssa Greenberg, Staff Photo

He also doesn’t believe in asking for funding. “I haven’t made that my priority. There’s a saying: If you ask for money, you get advice; if you ask for advice, you get money. So in my meetings with stakeholders and politicians and leaders of other theater groups, what I’ve done is simply ask to be a part of a collaboration. How can we come together and share resources?”

As far as PRPAC not having a space of its own, Johnson-Travis is working on partnerships with local theater groups such as La Casita Cultural Center and 601 Tully, which are both on the Near Westside. “All of these are like pockets of communities that we can tap into. So not having a brick-and-mortar has its benefits. There are a lot of venues and everybody is trying to get an audience. We don’t have a theater space, but we can bring our audience to your space.”

Actress Calmesha Givens, and South Side native, reached out to Travis-Johnson because as a Syracuse native she wanted to find a way to give back to her community. As the new director of development, Givens says having a community theater in Syracuse is a great opportunity for the youth to get involved in something that’s not as prevalent in this city.

“For the young individuals who are interested in art, it provides them with the experience, the exposure, the opportunity to engage in something that’s more fulfilling, something that would get them out of their environment and exposed to something more beneficial,” Givens said.

Tim Bond, the producing artistic director of Syracuse Stage, acknowledges the importance of community theater to the city. “Having a successful and active community theater presence is a sign of a healthy community. It gives a voice to emerging artists and builds audience interest in theater. Having a theater like PRPAC plays a very particular role in giving a voice to the African- American community here. I wish them much success in reviving this important organization.” 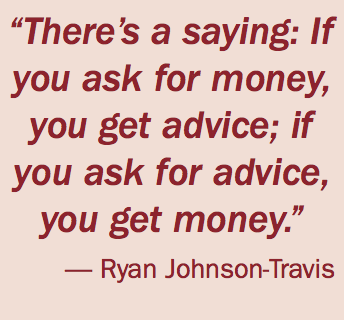 Johnson-Travis is passionate when he talks about his vision for the 2013-2014 theater season.

“I want to tell stories that mean something. I want to create and carve out and shape stories that have a message, and it doesn’t always have to be heavy or dramatic, but it can inevitably have message,” he said.
Givens adds that she is excited for the theater season, which will involve a range of productions. “It just won’t be predominately black productions but diverse productions, and that’s art. Art doesn’t define one specific race. Art is very diverse. There’s no shape, size, color or form. I believe that’s what Ryan is going to bring to the company.”

Originally from Atlanta, Johnson-Travis earned his bachelor’s degree in African World Studies from Fort Valley State University. He received a master’s in Pan African Studies from SU and also holds a master of fine arts in acting from the University of Florida.

Kyle Bass, who was one of Johnson-Travis’ professors at SU, has now become his mentor.

“I think he comes with a skill set that PRPAC can use right now to really move forward to draw new interest and revive its position in the community,” he said. “It will be challenging and he knows this. We’ve talked about the fact that he’s not from here and hasn’t been here that long, so that ability to build relationships will be really key for him. People will see that he’s serious about this, and I think he has what it takes.”

Johnson-Travis’ goal for the next year is to get out of the red and into the black, to find a home PRPAC can call its own and for PRPAC to have a vibrant presence.

“I really want to do a bedside thing for terminally ill patients. I would love for PRPAC in some way be involved with hospice so these people can see their stories in some type of play,” he explained. “I’d love for the work to reflect the cutting-edge, classy, really proactive material that it can, and not at the expense of monetary things. ‘We didn’t have the (money for the) project, so we had to cut back. No.’ In fact because we don’t have the budget, we need to press even harder to have a professional-looking product. Really the biggest investment for me would be the community. They say, ‘Look, this is something that I believe in, and I don’t want this to die.’ ”