For Lt. Keith Muhammad, learning about preventing fires is the best way to avoid injury. So, about 50 times a year, Muhammad goes to schools, senior centers and churches to teach people the basics of fire safety, which is especially crucial during the holidays. According to the U.S. Fire Administration, there is an increased incidence of cooking fires on Thanksgiving, Christmas Eve Day and Christmas Day.

On a recent weekday, Muhammad, a 56-year-old fire marshal in Syracuse’s Fire Safety Bureau, spoke to a crowd of more than 300 elementary students at the J.T. Roberts School at 715 Glenwood Ave., concluding the school’s Fire Prevention Month. Muhammad, who has given presentations since last year, said the crowd was the largest he’s ever had.

“Education is the key for fire prevention,” Muhammad said.

Muhammad, a current resident of the South Side, has been a member of the Fire Department for 16 years. He is not only a fire marshal, but also a code enforcer. Muhammad said he goes into buildings and makes sure there are no life safety hazards.

During the presentation, Muhammad taught students the five things they needed to know about fire safety: importance of smoke detectors, to get below the smoke, “stop, drop and roll,” find two ways out of a building and firefighters are your friends.

Karen Fruscello, a kindergarten teacher at the school, said it was important for students to interact with an actual fireman. She said everyone enjoyed listening to Muhammad and acting out situations. In years past, individual classrooms watched videos or puppet shows about fire safety.

When Muhammad walked onto the stage, he was met with loud cheers from students who were enthusiastic to learn about fire safety. Students practiced stopping, dropping and rolling, making the “beep, beep” sound of smoke detectors and crawling below the smoke line.

“They all want to be policemen and firefighters at this age,” said Sarah Leneker, a first-grade teacher. “This was a better setting for them.” 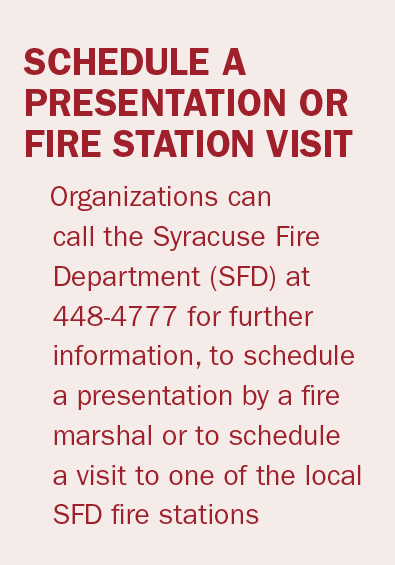 Fruscello said being in an urban area makes fire safety even more important for young students. When she worked at the Delaware Academy School at 900 S. Geddes St., Fruscello said she heard of a student who was severely burned from a fire.

“In an urban area where there are a lot of issues with lighters, matches around, children pick them up, play with them, a fire starts and they don’t understand the effect of that,” she said. “It is very important because they do keep the little things in their head.”

Leigh Sexton, a social worker at the school, contacted the fire department this year because she said she’s seen too many children get hurt from fires and wanted the students to get a more interactive presentation from an actual firefighter.

“I’m a fireman’s daughter and a fireman’s sister, so I find fire safety very important. It’s just kind of in my blood,” Sexton said. “I’ve personally just had a healthy fear of fire, and I think that should be taught to our children. Sometimes they don’t have it at home, so if they can at least be exposed to it at school, I think that’s a positive thing to have for them.”

Individual classrooms such as Leneker’s also participated in teaching students the basics of fire safety. Leneker said she dedicated an entire week to learn about making safe choices, escape routes and what to do in case of a fire.

“It’s an important life skill that the kids need to have at any age,” she said. “As teachers, we don’t just teach reading, writing and math. We have to teach our kids how to be citizens and how to make safe choices, and fire safety is extremely important.”

Lt. Beth Cousins, another firefighter for the Fire Prevention Bureau, said she thinks teaching fire safety at any age is important. Cousins said she devised the idea for a video puppet show for teachers to show their students.

“No age is too young,” she said. “Fire prevention, education and safety is paramount in the Syracuse Fire Department, and every member of the Fire Department participates on some level. We start on preschool level and teach right on up to fourth grade with the in-school presentations. Then after that, any group that wishes to have a presentation, we’ll do that as well.”

As the months get colder and the holidays get closer, Muhammad said fire prevention should be at the forefront of people’s minds because of the use of furnaces and stoves to heat homes and cook food.

“Around this time during the winters,” he stressed, “we have the highest number of fires during the months of December, January and February, so this is a good time to come in and talk about fire safety.” 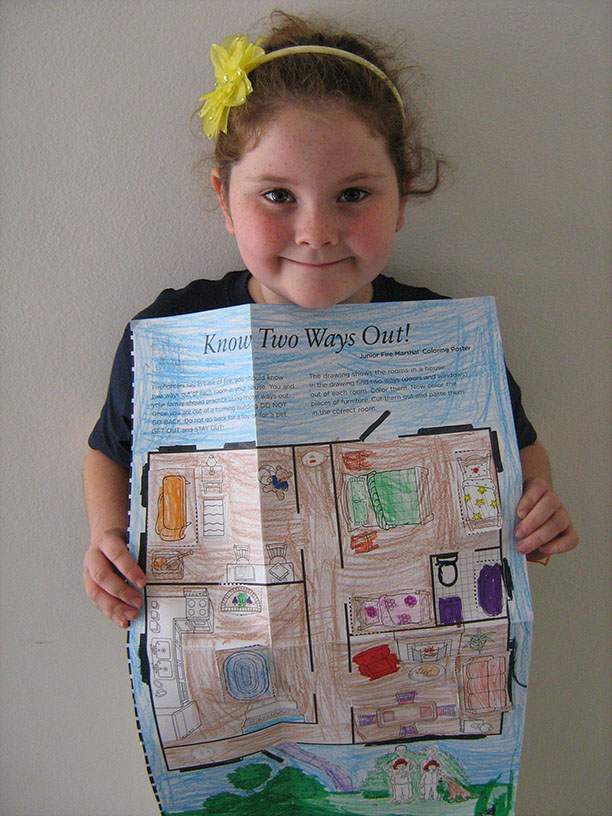 Parents and teachers can partner to teach children about fire safety.  Children must be taught what fire is, that it can be dangerous and how to react to fire to increase their chances of surviving a fire in the home. The Syracuse Fire Department recommends the following fire safety tips:
Sound the Alar m
Show children the smoke alarms in the home. Explain how the detectors operate and let them hear the sound. Instruct them on what to do if the smokes alarm sounds. Allow the children to watch you change the batteries. Let them test the detectors.
Get Low and Go
Explain the dangers of fire and smoke and how smoke rises and then banks down toward the floor.   Get a sheet or blanket and have the children practice “Get Low and Go” – crawling low under the smoke where there is “good” air as oppose to the “bad” smoke.
Things that are Hot/Things that are not
Teach children difference between hot and cold.  Sometimes their bodies will touch hot things causing injury.  Explain to them how they can avoid getting hurt by knowing which things are hot and which are not.

Stop, Drop and Roll
Tell the children that if their body touches something hot and their cloths catch on fire they must stop, drop (cover their faces) and roll back and forth until the fire goes out. Have them practice this over and over again.

Two Ways Out
Develop an escape plan with your children. Come up with two ways out of each room. Show them how to test a door with the back of the hand to determine if it is safe to open the door. Tell them, if the door feels hot: “Do not open the door!” Find another way out. Determine a designated meeting place outside of the home where the family can meet once they escape the fire.