What a Wonderful Juneteenth Celebration When You Bring History to Life

Juneteenth is a celebration of pride, heritage, culture, history, knowledge, spirit, energy and talent that culminates into a vision of hope to preserve the past for the future.

Juneteenth was established because Texas slaves were not told that they had been emancipated in 1863. Instead, they were informed two and half years later that they were free. This jubilation prompted an annual celebration of Freedom that is celebrated across the country.

Today amidst the cheering crowds, smiling face’s, looks of excitement and anticipation of the parade by the people standing on the sidewalk, one could only feel the love and pride that was emitted in which ever direction you looked. 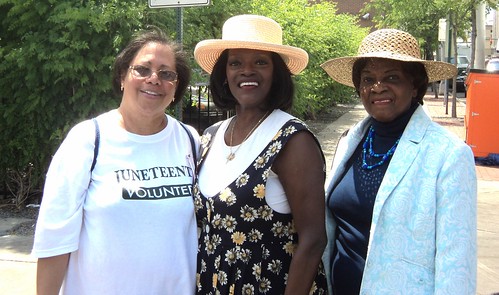 Cheryl Hills stands with Michelle Jones Galvin and Joyce Jones, both nieces of Harriet Tubman, during the 2012 Syracuse Juneteenth Celebration.

With Juneteenth being a celebration of our past, how wonderful it was to see the GGGreat-Grand nieces of Harriet Tubman who was a true pioneer of “Freedom.”  Imagine what Tubman would have thought about today’s celebration if she had the opportunity to view it with Mrs. Joyce Jones and her daughter Mrs. Michelle Jones Galvin who have just finished writing a book about their aunt’s life, “Beyond the Underground. Harriet Tubman, A Heroine.”

What words of advice would she have given to Ms. Valerie Hill (Juneteenth Board Member) who organized the parade from Dr. King School when she stated “they have been trying to get back to Juneteenth Festivals from years past?”

I believe that she would say that she is proud of the accomplishments since the start of Juneteenth in Syracuse and knows that it will continue to grow and thrive because of the dedicated, committed visionaries on the Juneteenth board and wonderful volunteers that participate each year.

I can see her eyes light up as she watches the F.O.C.U.S. Fire Fighters of Color United in Syracuse marching in the parade. “Oh what a beautiful sight and how far we have come since slavery,” I believe she would exclaim. 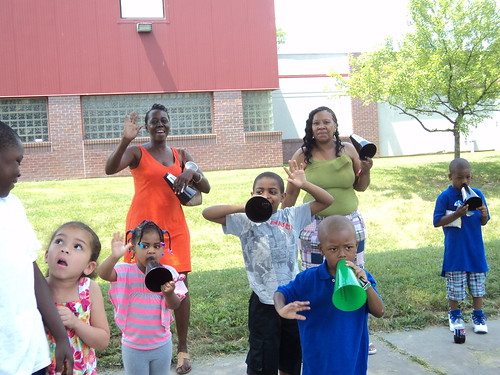 Marian Austin, in orange dress, with, from left to right, Dayvon, 7; Ayanna, 5; Aliyah 3; Gregory, 7; Robin Hightower; and her grandsons, Terrell, 5, and Timere, 3, both in blue shirts, enjoy the parade.

I can see her walking through the crowd and stopping to talk with Marian Austin who brought four children to watch the parade especially seeing the excitement on Dayvon’s face at 7 years old as he tells her that the best part of the parade was The Elks Marching Band. He also loved the music and the drums. I can see her move on to talk with Robin Hightower who shared today with her two grandsons, Terrell and Timere (5 and 3 years old), as they blew their horns, waved and shouted to the marchers in the parade. What a great time they had participating with their family and them feeling like they were a part of the parade.

Standing looking with surprise, joy and pride as the New York State Assemblyman Samuel D. Roberts, Lambda Kappa Mu Sorority Inc, Men to Manhood Program, International Free and Accepted Modern Masons and Order of Eastern Star Incorporated, African American Onondaga County Probation Officers, marching bands and several youth organizations all came together to share in the joy and esteem one gets when you’re a participant in the Juneteenth parade.

Looking at the Voter Registration Booth, I can see Harriet Tubman talking to Dr. R. Deborah Davis from the Lambda Kappa Mu Sorority and two of their pledges, Kerry Kennedy and Nichole Brown, finding out how the new voting ballots work. I see her encouraging everyone to sign up to vote and telling them what a battle was waged for “people of color” and remember how many lives were lost for this privilege.  She would remind them that she died in March 1913 without a chance to cast her vote. What an amazing moment it must be now when you are in the voting booth. You see that young man Ms. Kennedy, ask him if he is registered to vote!

As you look around at the Dr. Henry A. Washington Health Pavilion and walk and learn from Arc Of Onondaga, Green jobs NYC, Suny EOC just to name a few, one gets a feeling of satisfaction and a deep desire to come back next year to learn more about staying healthy, educational opportunities and how you can help your community.

I believe Harriet Tubman as she listened to the choirs would sit back, smile, relax and enjoy the food and look forward to next year’s Juneteenth with happy anticipation of the history and celebration that is yet to be written.