Empowering the Female Youth of Syracuse

Actress Tasha Smith, from Tyler Perry’s “Why Did I Get Married?” films, spoke to a room of approximately 100 Syracuse area high school girls of color about her troubled upbringing and path to Hollywood success at the Schine Student Center at Syracuse University on Saturday, March 26.

As the keynote speaker for the Image Initiative’s 7th annual Sisters Empowering Sisters Conference, Smith, who wore a black sequined sweater and dark wash jeans, commanded the stage and engaged the teenage girls with her experience of growing up in poverty in Camden, New Jersey, with a mother addicted to drugs. 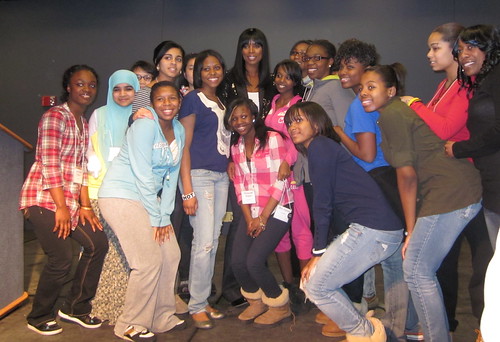 After her talk, actress Tasha Smith took pictures with each group of students from every high school in attendance. This picture is of a Smith with the girls from Nottingham High School. -- Photo by Jennifer Moncayo

“Her addiction caused us to be evicted,” Smith said. “We lived everywhere; it messed with me. You don’t feel stable.”

Despite several personal struggles, such as alcoholism, working in a strip club at the age of 14 and dropping out of high school, Smith told the crowd of young women that everyone makes mistakes. Smith encouraged the girls to believe in their dreams, like she did, and to strive to achieve their goals.

In addition to inspirational speeches from leading women of color, the two-day conference featured a range of workshops, including ones focused on health, education and sisterhood.

“The topics and workshops that are discussed every year are relevant to us,” said 16-year-old Kendra Velazquez, a student at Nottingham High School, who attended the last three conferences. “It’s motivational and empowering for young women,” she said.

“They teach us how to be sisters and respect each other,” added Shalisa Manley, 16, a student at Henninger High School, who enjoyed the Sisters Circle where the girls got into groups and gave each other compliments. “Some girls got sad and cried because they never heard that they were beautiful before,” she explained.

“I liked the Homeboy Industries panel. It gave me ideas on what not to do,” Manley said. “It made me think. Now I want to go to college,” she said.

This year’s conference was highly attended, with 133 girls on Friday and 93 on Saturday, said Eva Williams, board member for Image Initiative.

“We hope the girls feel empowered [from the conference],” Williams said, “and that they can achieve their dreams.”