Syracuse Africa Bound, an organization designed to educate children about their African heritage, will be taking three local children to Ghana in West Africa this summer. Over the next few months, the organization will hold a series of fundraising events to raise money for travel expenses and the service work they will do in Africa. 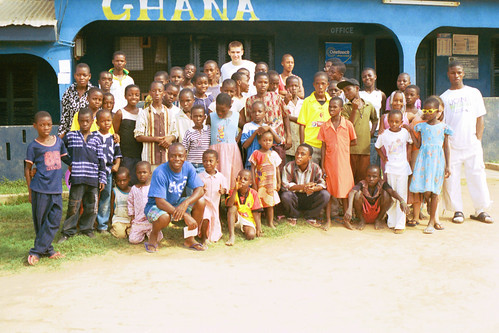 In January, the organization raised about $500 at a special Syracuse Stage event. 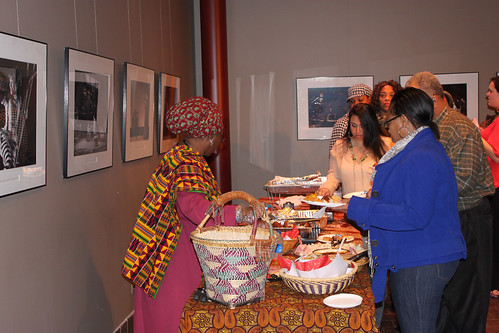 In the hour before the curtain rose for the rock musical, “RENT,” guests snacked on spicy African food and exchanged banter with Stanley Bahorek, a professional actor who played the character Mark in the production. The crowd included current Africa Bound members and newcomers eager to learn more about the program.

“The best part of the night was seeing community members who’ve known about Africa Bound, but who for whatever reason have not come to our other events,” said Valerie Escofferey, co-director of Africa Bound.

After Bahorek left to get into costume, founder Vanessa Johnson told the story of why and how she started Africa Bound in 1990. At the time Johnson owned an art gallery in Syracuse. One afternoon she noticed a young man “acting up” and behaving disrespectfully toward adults outside her shop. She said she had seen him outside before, and decided to intervene.

Johnson called the boy inside and together they developed a plan. He would come each day and do his homework in the store, and in return Johnson would provide him with a small after-school job. One afternoon, the boy arrived upset by something he had heard in school.

“His teacher had said something about Africa that he didn’t like,” Johnson recalled. “That Africans were stupid, that they practically swung like monkeys from trees.”

In response, Johnson advised him that he should one day travel there and see the truth for himself. The child answered that he would never go to Africa because he was too poor. 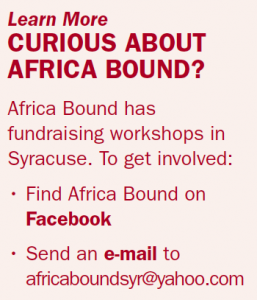 Johnson believes a promise is a promise, so the very next day she began calling friends telling them, “We’re taking kids to Africa.” For the next year and a half Johnson worked with friends and parents of interested children to arrange everything from passports and accommodations to funding. It costs around $3,000 to send one child on the trip. Africa Bound went on its first trip, to Senegal, in summer 1990. The trip was a success, but a hard-won success, and Johnson did not intend to plan any more trips.

It wasn’t until the terrorist attacks of Sept. 11, 2001, that she considered restarting the program.

“When 9/11 happened, my response was like the response of a lot of Americans, ‘What can I do to make an impact on the way we’re seen as Americans?’ ” Johnson said.

Africa Bound began again. In 2005, the group brought three children on their first trip to Ghana. The next year, they brought six children. And in 2008, they brought nine. Johnson says there has not been another trip since then because the economic crisis has made it impossible to raise enough money.

Johnson says that the group strives to support and donate to both a library and an orphanage in two small towns near Cape Hope, Ghana. The orphanage supports 80 children — some without families, others with families that are unable to care for them.

This year, the group will hold a Facebook and e-mail “blitz” asking community members to help them procure six used laptops for the library, which is located in Wora Wora, Ghana.

Service work in Ghana is close to the heart of Africa Bound, but Johnson says the most important aspects are the lessons it teaches participants about multiculturalism, African heritage and diversity.

“It’s about teaching kids where they come from historically, what makes this melting pot,” she said.

The program hopes to instill values associated with hard work, compassion and patience. Johnson says she wants members of Africa Bound to serve as ambassadors to their communities, and to take what they’ve learned during their travels and use it to effect change here. 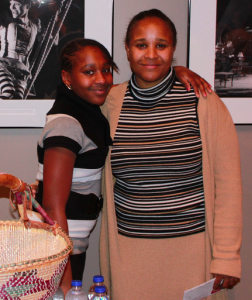 Cynthia Dudas-Judge, right, and Brandi Dundas-Judge were past travelers with Africa Bound and attended February's fundraiser. Brandi spoke about her experience during the event. -- Photo by Mary Desmond

“It makes them more aware of the world, it makes you re-evaluate life, re-evaluate priorities,” Dundas-Judge said. She also values the lessons the experience taught her children about the effects of determination and hard work. “The earning part of it, working toward a goal, helps facilitate vision,” she said.

Her 13-year-old daughter, Brandi, spent time in Ghana, which still guides the way she lives her life today.

“I learned that a lot of people take stuff for granted,” Brandi said.

Brandi is still involved with Africa Bound and other community service programs in Syracuse. She incorporates lessons learned in Africa into her daily routine by doing little things, such as saving water and turning off lights. Her mother says she sees how the trip continues to influence Brandi’s life. Seeing the poverty of orphans in Ghana has taught her children the difference between “want” and “need.”

Over the next few months, Syracuse Africa Bound members will host events to raise money for their trip this summer. In May, they will hold an event called “Cooking with the Diaspora,” in which local chefs will teach participants how to make a variety of ethnic meals.

Dundas-Judge believes that anyone who wants to be involved should reach out to learn more.

“I would say that it’s a lot of work, it’s a big commitment but the gift is life changing. It will change your child’s life.”