Changing one mindset at a time

Many minority students go through school unaware of their potential and capabilities. They also don’t take advantage of all the resources that are available to them. One organization that is working to awaken and expose students to a world beyond their neighborhoods is The Junior Frontiers of Mohawk Valley.

The Junior Frontiers of the Mohawk Valley is the largest African American civic youth organization. Established in Utica in 1996, the organization made its way to Syracuse in 2004 with the goal of providing support to minority children. The Junior Frontiers focus on academic excellence, professional development, civic responsibility and self-esteem. 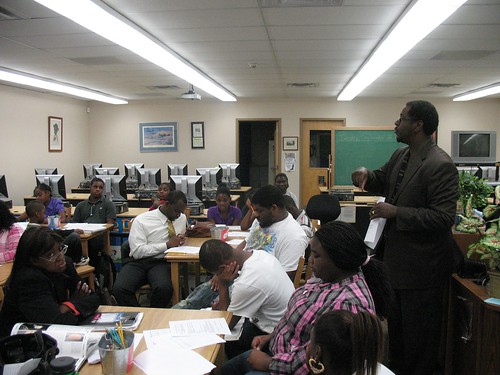 Rasheed began the session by asking the students to introduce themselves and describe what they did during their summer vacation. The students stood voluntarily, sharing stories of visiting colleges like Le Moyne, Oswego and some going as far away as University of Southern California. Students were able to experience college first hand, taking college courses in accounting, biochemistry and engineering.

Exposing the students early to what it will take to be successful in college and the steps needed to get to college is one of The Junior Frontiers main goals. Every member of the organization is obligated to take the SATs. Students in high school have to take it twice; those in middle school take it once. Start early, do often and become successful, is a motto that the Junior Frontiers follow.

After the introductions, Rasheed outlined all the events the organization had lined up for the upcoming year. The students will be exposed to a multitude of programs and events that will help to guide and enrich their academic journey. Students will have the opportunity to tour SUNY Colleges and Historically Black Colleges and Universities. They will get a chance to partake in a seven-week SAT prep course, writing workshops and much more.

“I wanted to be apart of Junior Frontiers because they offer a lot of opportunities and chances to get scholarships,” said 14-year-old MPH student Ishaqq Miller.

Miller is also looking forward to going on the Historically Black College and Universities Tour. This year, the tour will be making stops at schools located in North Carolina.

“It’s good to have people in the community that care about our children’s success,” said parent Paige Braxton. Over the years, Junior Frontiers have seen great improvements in many areas. Within the last three years, the percentage of students going on to attend college immediately after high school has risen from 55 percent to 100 percent.

“This organization is important because it gives students the tools they need to be successful, not just short term but also long term,” Rasheed said.

To learn more about The Junior Frontiers of the Mohawk Valley, contact Jawwaad Rasheed at Jawwaadr@aol.com