Chess Puts the Pieces in Place for South Side Students

The fifth-grader studied the chess board, barely glancing up when a group of his classmates loudly entered the room. With his brow furrowed in concentration, Dave Ahyee strategically advanced his queen, seizing his opponent’s pawn.

“I like to think a lot,” said the 10-year-old member of Southside Charter Academy’s chess club. “It’s a thinking game.”

The game teaches students how to focus and solve problems – skills that can carry over into the classroom, said Anton Ninno, the club’s faculty adviser.

Dave and up to 30 of his peers, ranging from second-graders to eighth-graders, meet every Tuesday after school to learn to play chess, challenge opponents and improve their game.

“It gives them a chance to learn something they can do for the rest of their life,” Ninno said.

When the students file into the classroom after school, they pair off, set up boards and launch into their games. Ninno keeps a list ranking the top 10 players.

The opportunity to play in local tournaments draws in some of the club’s members. Ninno said he tries to encourage a tournament-like atmosphere in the regular meetings by telling the players to keep their voices down and focus on the games.

“When they’re in a tournament they can’t talk at all, so we make it clear to them that they need to talk quietly,” Ninno said. “It’s challenging and gives them a chance to focus and pay attention.”

Ninno said this focus can help kids in other areas. 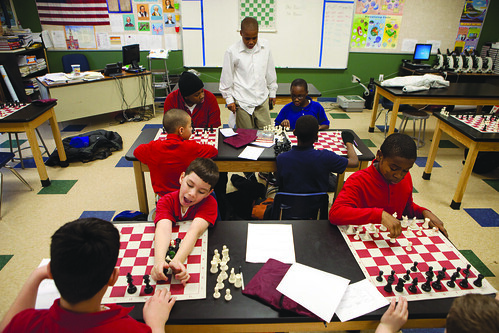 Chess club members face off during a weekly practice. They keep tabs on who beats whom. -- Photo by Brad Horn, Staff Photographer

Dave said he uses the skills he’s learned from chess in the classroom.

“Sometimes when the teacher tells us to be quiet, I think of chess in my head,” Dave said. “I know all the squares and set up a game in my head and play by myself.”

Dave has played in 19 chess tournaments and has won 11 trophies, he said.

“My dad gets tired of playing me because I constantly keep beating him,” Dave said. “He supports me and keeps pushing me to play chess every day. I haven’t missed a tournament yet.”

Dave and some of the more skilled players in the club work with Bob Nasiff, a local chess expert, who comes to the latter half of the meetings to teach new strategies and improve the students’ games.

“I like teaching the kids,” Nasiff said. “I like watching them develop. It’s fun watching those kids really make an effort to improve themselves.”

Nasiff, former president of the Syracuse chess club and author of a chess column in Stars magazine, published by The Post-Standard, encourages the more advanced students to study chess strategies in books and on the Internet and to play at home. Nasiff, a national chess master, worked for the U.S. Chess Federation. 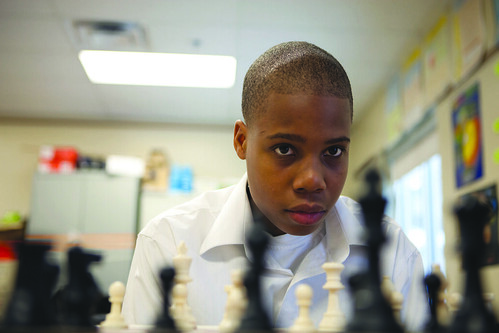 Jamal Harris, 12, stares in concentration as he decides his next move. Jamal is a seventh-grader. -- Photo by Brad Horn, Staff Photographer

Nasiff travels to several schools in the area to teach chess. He said the Southside Charter Academy, located at 2200 Onondaga Creek Blvd., has done a great job with the chess program.

Adham Qaddourah, one of the younger members of the chess club at 8 years old, said he enjoys meeting new people and learning a different type of game.

“It’s one of the funnest games,” he said. “It’s not like you keep moving pieces until you get to the other side. You got to get the king and checkmate.”

Adham, a first-year member of the club, said he has a chess book at home that he reads to get better. “Next tournament, my mom’s going to let me and my brother go,” Adham said.

Savon Smith, 12, a veteran member of the club, said that playing chess fills him with pride.

“When I win a game, it’s another accomplishment for me,” Savon said. “Chess is actually the only game where I can think and strategize against another opponent.”

Savon said he noticed improvements in his ability to concentrate in the classroom after joining the chess club.

“With me, if I’m not concentrating, I’m not learning anything,” Savon said. “Chess helps me maintain my composure and just focus. I practice, I play on the computer every day and I try to get better.”

“I had one second-grader who said, ‘How can I get anywhere in this game if the guy keeps taking all my pieces?’” Ninno said. “I said, ‘Yeah, that’s a problem. Why don’t you take some of his pieces?’”