Two cars carrying a group of eight Eagle Wings Academy students and two teachers recently climbed an icy slope that led up to the Mars Hill Network Radio Station at 4044 Maykes Road, Syracuse. Some dreamed of what it might be like to be a professional singer or DJ and others wanted to see gadgets and enjoy a get-away.

As the 6th-8th graders made their way to Mars Hill Radio, they passed by vast expanses of farmland dotted by modern homes, large masses of snow topped hills and evergreen trees. 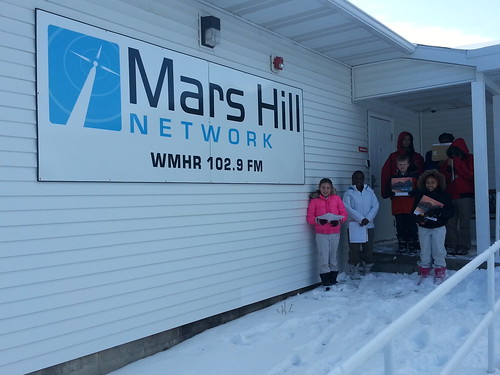 The Eagle Wings scholars were surprised to find this bucolic scenery just a fifteen-minute ride away from their tuition-free private urban school at 423 Valley Drive in Syracuse.

When the students arrived, Mark Hard, the station’s Program Director/Director of Ministry Relations, greeted them. He grinned happily from ear to ear with a gleam in his eye. His joviality put the visitors to ease right away.

Mr. Hard proceeded to lead the students and teachers on a tour of the cozy, homey studio. He sang a favorite worship song about how Jesus is forever faithful and then recounted how he originally wanted to be a professional singer but never followed up with it.

Later, Mr. Hard taught about the different technology that goes into the radio broadcasts. He mentioned that he can control the radio waves by phone, computer and by the actual apparatus designed for the radio’s use. The students had prepared many questions for Mark and he generously took the time to answer each one.

Then, Mark let students put on headphones and huddle around the microphone as he recorded them. Some spoke lines from a script that introduced the network station. Others recorded their own sayings, most done in a humorous British accent. Mark demonstrated some basics of sound editing on the recordings. The students had a giggle or two as he played them back 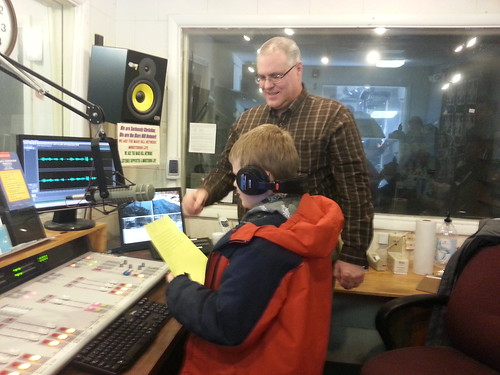 for the class to hear.

Toward the end of the tour, the students admired the quilt and inspirational art donated by several grateful listeners. Mars Hill staffers presented the visitors with candy and brightly colored cups advertising The Hilltop Kids programming. The Eagle Wings Academy youth said their thank yous and goodbyes, leaving with a greater insight into broadcasting careers and an appreciation for the powerful ministry of the Mars Hill Network and its devoted workers.