Raising teenagers is no easy feat, and to do it twice is impressive. Clinton Williams Sr., 63, and his wife, Linda, 61, are raising their son’s three children.

Having raised their own children before, nothing pulls the wool over the Williams’ eyes this time around. They are instilling values in their grandchildren that were common in their day, and are now quickly disappearing. 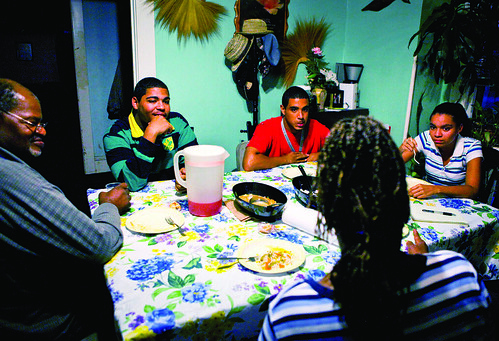 Clinton Williams Sr. and his wife, Linda, enjoy a family dinner with their three grandchildren. -- Photo by Mackenzie Reiss

The Williams family is part of a growing national trend of grandparents raising their grandchildren. As of March 2008, according to the U.S. Census Bureau, 6.3 percent of children in New York state live in a household run by grandparents. Carrie J. Smith, Syracuse University professor in social work, lists four reasons for absent parents: the large number of people sentenced to prison for drugs, parents in military service, teenage parents who are unable or unwilling to be a parent, and the high rates of mental illnesses.

At first, Linda found it overwhelming to have three children move in while she was still working full time. She adjusted her work schedule so she could go home any time to check up on them after school. The idea that “Granny could pop up any time” made them more fearful to do anything out-of-line. She soon realized she was no longer the doting granny figure, but had to take on the mother’s role as a disciplinarian.

Linda noted with melancholy that the mother’s death still has “lasting effects” on her youngest grandchild, Shannarrah. She recounted that she used to find Mother’s Day upsetting because, while other classmates were making cards for their mothers, she was making one for her Granny.

Clinton Jr. visits the children once every two weeks. When he is over at the house, he watches television and chats with them. He recalled it was difficult to give up legal custody of his children to his parents. “I rationalized that I’d still get to see them, so that would be acceptable,” he said. Clinton Jr. does not work and is on disability support. The oldest son, Clinton III, is the closest to their father, who enjoys wrestling with him. The children would often call their father and ask him why he was not over to visit them, Linda said. Their father chips in to buy whatever he can for the children, including their favorite cereal; he occasionally treats them to sports games.

Linda’s parenting has as much to do with experience as money, though. Nothing gets past her, everyone agrees. Linda knows that when she asks her grandchildren to take the laundry back upstairs that if they say they will do it later, they will most likely not.

“[Granny is] always right,” said Justin, who said there is no way of getting around her years of parenting experience.

“How do you think I got to be 61? Don’t you think I learned some stuff over the years?” said Linda.

The grandparents are not able to do as many chores around the house as when they were younger. Clinton Sr., or “Pop Pop,” asks the grandchildren for little things — for example, to pick up the apples in the yard so he can mow the lawn. The grandchildren help inside the home as well by washing the dishes and vacuuming.

Now that Linda is retired, she can stay home and watch the kids after school.

“Sometimes, their old ways don’t apply anymore,” Shannarrah said. Clinton Sr. forbids Shannarrah from being in the living room when her brothers have their male friends over. She insists there is no need for a boy at this stage of her life, and she should concentrate on getting into college. All three children are not allowed to bring friends upstairs to their bedrooms.

“Shannarrah has been through quite a bit, and I don’t want her getting hurt,” Clinton Sr. said. He worries that with a boyfriend, she could become pregnant like many of her teenage peers. Shannarrah as a result, with her grandparents’ values instilled in her, dresses conservatively. When she is wearing a tank top, she wears a cardigan, too.

Linda insists on locking the computer with a password. Even when she catches the children minimizing their screens, she asks them to pull the screen back up for inspection.

“They treat me like I’m senile,” Linda complains. The children do tease her, and said it is not uncommon for their granny to assign them to do something, forget she assigned it, and then ask them why they are doing it.

“I know they are good kids because they have an invisible cord holding back from doing things they should not be doing,” said Linda, who added that from what people observe of the grandchildren outside the home, she hears mostly good things.

She did, however, catch wind from a co-worker that Shannarrah was writing alarmingly inappropriate content on her MySpace page. Linda called MySpace to take down the page, and Shannarrah accepted her granny’s judgment.

Johanna Hannah, with the Onondaga County Department of Aging and Youth, said that what warms her heart about grandparents raising grandchildren is that she has “never met a grandparent [who] wasn’t dedicated to their kid. There are never ulterior motives. They never want to abuse the system.”