Kids are able to get tattoos.

A Henna Body Art Workshop was held at 2 p.m.  Tuesday, July 7, at  Beauchamp Branch Library on 2111 S. Salina St. Suzanne Masters, who has experience doing Henna for more than a decade, explained how Henna is used in many different ways all over the world and gave Henna tattoos to children in attendance.

She began the workshop by showing everyone what a Henna plant looks like after it is made into powder. After it’s made into powder, oil and lemon juice is added. A black liquid is then formed. You apply the liquid to your skin, let it dry for 12 minutes, and it will last for days or a couple weeks. 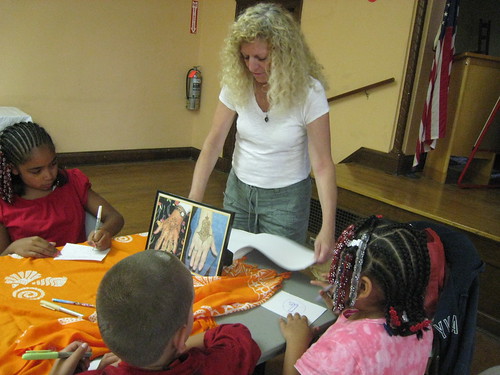 During this workshop, children were able to create symbols that represent them as an individual or one created by Masters.

Showing the examples of henna, Masters then explained the significance of symbols when doing Henna because every symbol has a definition behind it. Next, all of the children are told to draw symbols that are important to them. Kids drew many things from crowns to lightening bolts.

After every child drew a symbol, she then began to start drawing the design they had picked on their hands. Kids were eager for their turn. 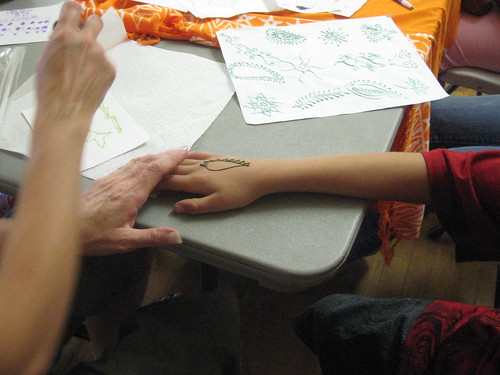 Henna is applied to create a design on one child's hand.

Before beginning the process, she told every child that it takes 12 minutes for it to properly dry, but the longer you leave it on, the darker it will  appear on your skin.

Kids were excited about the process. I asked Tia Williams, 9 , if she enjoyed the workshop.  She answered, “Yes, because it’s fun, and we can learn about doing this.”

“I usually do Henna for Hindu weddings. That’s a big one,” she said.

Also, some get Henna in preparation for a tattoo to see if they really want it.

Henna is a flowering plant. It is native to tropical and subtropical regions of Africa, southern Asia and northern Australia. It is a small shrub or small tree. Henna body art is used for many ceremonial purposes. It has been used to adorn young women’s bodies and also as part of social and holiday celebrations in eastern Mediterranean.

A total of 23 people attended. The event brought knowledge and understanding to those who knew nothing about Henna Body Art, and answered questions those who knew about it had.

— Article and photos by Ralithia Dennis, The Stand’s Intern