She hopes her children — and maybe even her grandchildren — will be able to see her artwork someday.

That’s because 100 years from now, 12-year-old Uniyah Chatman’s stained-glass window could still be hanging in the Dunbar Center.

“When I come back to Dunbar when I’m older, I can say I made that glass and I designed it and my friends helped me,” Chatman said.

Her friends are her classmates in the 10- to 14-year-old after-school program at the Dunbar Center.
Together, the 13 students designed and created three orange and blue stained-glass windows for the Dunbar Center on South State Street. 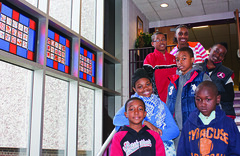 Stained glass typically lasts for 100 years, and the students hope that’s how long their windows will endure.

“Everybody for those 100 years will be able to see what we did,” said Jamon Martin, 12.

The project was a year in the making, and began with a field trip to Brennan Stained Glass Studio on West Genesee Street.

The after-school supervisor, Adalsa Latty, scheduled a trip to the studio — thinking it would make for a good afternoon visit.

“I had no idea what it would turn into,” Latty said.

Scott Brennan, owner of the studio, had the students put together a stained-glass window of a sunset to present to their executive director.

“We were all so impressed,” said Peter Cardamone, director of youth services at the Dunbar Center.

“The fact that the students were involved in the design and production was what really impressed us.” 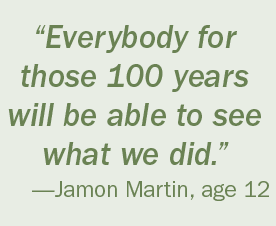 “That went over big,” Brennan said. “They loved it, so I thought we could make something for the building that would last a lifetime.”

Brennan taught the students how to make a stained-glass window from start to finish, guiding them each step of the way.

Working in the studio six times over the course of 13 months, they learned how to design a window with geometric shapes and colors, and how to cut and then fuse the glass in a kiln.

After the students learned about the process, Brennan gave each one basic sketches of a design and asked them to “improvise” the rest, determining the shapes and colors. 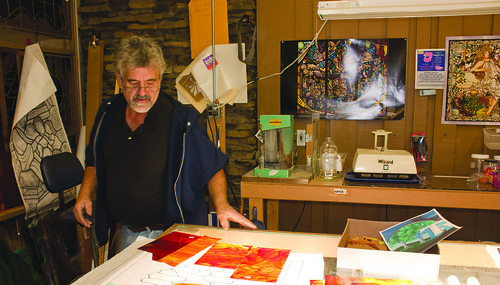 The winning design belonged to Chatman.

“I was really surprised,” she said after she found out she had won.

All of the students agreed: The most difficult part was cutting the glass.

“I learned patience, take your time, and if you rush you’ll cut yourself,” Martin said.

Brennan said the students had a few cuts, about the size of paper cuts. With careful supervision and instruction, he and his staff made sure the students didn’t seriously injure themselves.

Though they went through about two boxes of Band-Aids, their supervisor said it didn’t deter them.

“They had a few cuts, but they never seemed to care,” Latty said. “Anything you set for them, they go at it.”

It was also a learning experience for their instructor, who does not usually see a dozen pre-teens in his glass-making studio.

“I, as a non-educator, took a lot of attention to this,” Brennan said.

He was surprised at how fast the students finished each step, and he also was impressed with their “polite manners” along the way.

“That was really nice. They were so receptive,” he said.

Brennan said he hopes to turn the Dunbar project into a larger mission, possibly working with nonprofits to help students create more stained glass to auction and raise money for their schools.

But for now, he is focusing on the immediate benefits of the project.

“I think it’s important for the kids to see how other people make money, and that there’s an industry like (glass making),” Brennan said. “They were tickled every time they got (to the studio). It’s great to get out in the field and see what other people can do.”

Now he has a picture of the students in his studio. The name: “The Future Glass Makers of America.”