Most people haven’t been able to pursue their dreams on a national scale, but two teenagers from Syracuse’s South Side have done just that.

Corcoran High School junior Tevin Johnson and graduated senior Tracee Jennings participated in the annual national ACT-SO competition earlier this month. Johnson competed in the category of dance; Jennings, in the category of entrepreneurship. They were joined by competitors Christian Charles and Justin Tanksley, both of Jamesville-Dewitt High School. 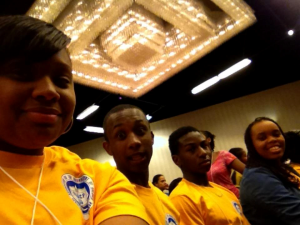 ACT-SO stands for Afro-Academic, Cultural, Technological and Scientific Olympics and is sponsored by the National Association for the Advancement of Colored People. It is a yearlong program designed to encourage high academic and cultural achievement among African-American high school students, according to NAACP’s website.

The four teenagers rehearsed their presentations for months leading up to the competition in Houston and were simultaneously waiting to receive enough donations from supporters to fund the five-day trip. Gwendolyn Fagan, director of Syracuse’s newly revived ACT-SO committee, said they received the last few dollars the day before flying to Texas.

“I was so pleased with the Syracuse community,” Fagan said. “We couldn’t have done this without them.”

Once in Houston, Jennings said that it was both intimidating and inspiring to be around nearly 700 of the most talented teenagers in the country.

“A lot of people had already been to the competition, and some people were already running the business plans that they were presenting,” said Jennings, who was a first-time competitor and was up against about 40 others in her category. “I did get pretty nervous in front of all of that competition.”

Although Jennings did not place for an award, she said being at the competition boosted her confidence for her future career.

“I had a man come up to me after I presented and tell me that his wife would love my business (a custom shoe business), and that I should keep trying,” Jennings said. “I was excited to see people grasping onto an idea that was mine.”

Johnson got to share more than one of his original performances on the dance floor. He was chosen to dance and choreograph for an ensemble that performed at the awards ceremony.

“It’s always been my dream to choreograph for a group,” Johnson said. “Being with the other dancers was so inspiring. It was an experience I’ll never forget.”

Johnson plans on competing again next year, and his advice to new students coming into the Syracuse program is to have confidence in themselves and their talents.

“Show the judges what you believe in,” Johnson said. “When you’re passionate about something, that’s what’s going to appeal to the audience.”