Music to Their Ears

A 15-year-old steals from an elderly man. The goal: Get just enough money to buy some food. The yield: Just seven cents.

Still, the culprit draws prison from a judge bent on teaching him a lesson.

This could be one of the songs “DJ Maestro” plays at Syracuse University football and basketball games at the Carrier Dome, another tale in rhyme. But it’s no make-believe story. 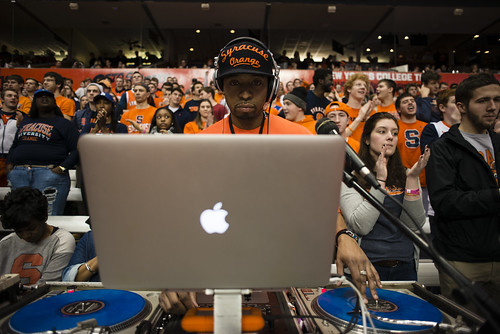 Hasan Stephens, also known as DJ Maestro, at the Syracuse vs. Miami game at the Carrier Dome. | Photo by Alexendar Hootnick

The man behind the music that fans hear at the Dome, whose real name is Hasan Stephens, works with local youths whose stories — like this one — are real.

Stephens runs Good Life Youth Foundation, a program for at-risk youth in Syracuse. The journey of this 15-year-old is just one of many Stephens says he’s witnessed.

“That really hurt me because I knew him, knew who he was, and I knew that it was a mistake,” Stephens said recently. “I wish he had been allowed to come back from that mistake. Punished yes, but not punished like that. Not as severe for what he did.”

Stephens says he’s worked with about two dozen youths since 2012, when he acquired space in the South Side Innovation Center and launched Good Life, an organization where he combines his passion for hip-hop music with his mission to show youths how to beat poverty. People likely would recognize Stephens this winter by his stage name, “DJ Maestro,” spinning the latest beats and pumping up the crowd before any SU basketball game. But Stephens spends much of his time serving as the executive director of Good Life or teaching the evolution of hip-hop at SUNY Cortland. 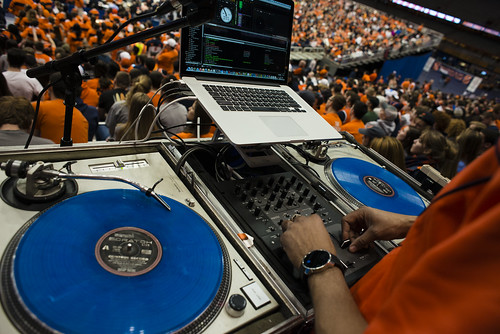 Stephens was DJ-ing at the Carrier Dome last spring when an SU junior approached him, and got involved by accident. Now a senior, Zachary Veca smiled when he recalled meeting Stephens.

“We were just having a normal conversation about his music choices when I decided to ask him for his card,” Veca said. “He gave me his Good Life Youth Foundation card and he told me about his community service and his foundation, and I was actually looking for community service at the time, so it was perfect. I gave him a call and started doing community service, which led to an internship, then a job.”

Veca said the main thing he’s learned from working with Stephens is how to relate to the kids.

Music is the key.

“Everything I do has a hint of hip-hop,” Stephens said. “I use hip-hop here in the foundation to educate youth on life skills, financial literacy skills and also entrepreneurial skills.”

While hip-hop doesn’t always have the best reputation, Stephens searches for songs that have a positive message for youth, such as Jay-Z and Kanye West’s song “Murder to Excellence.” Stephens takes lyrics to show that doing the right thing, from managing your money to staying out of trouble, is the only way to be successful. An example: “I’ll be a real man, take care of your son. Every problem you had before this day is now done.”

Stephens said he’s seen kids getting locked up, but also success stories like that of his first mentee, Ron Funderburg. Stephens brought a teenage Funderburg to work with him in hopes of keeping him off the streets.

“He was just hanging with me and he started learning a lot of things,” Stephens said. “He eventually branched off and became an entrepreneur and owns a clothing label now, Unico Re’, and he’s doing really well.”

Funderburg is fond of his former mentor, crediting his many successes to Stephens. When they were working together, Funderburg said he wanted to be a fashion designer, and Stephens immediately offered one piece of advice — learn to market yourself.

“Honestly, he was there at every moment. When I needed somebody to talk to, he was there,” Funderburg said. “He’s like a big brother to me.”

Funderburg is now a mentor alongside Stephens at Good Life. He takes the kids with him to his fashion shows while Stephens will take his mentees to work in the Carrier Dome.

“It’s anything to get them off the streets,” Stephens said. “Rather than lose them, we need to educate them.”

Education and music is something Stephens has valued since he starred in childhood plays. The self-described “momma’s boy” says he owes a lot to his mother, Jane Stephens.

Jane, a single mother, raised Stephens in the Bronx during the late 1970s and early ’80s, noting how the music of the era influenced his appreciation for the arts. They did everything together, from visiting the Bronx Zoo to seeing Broadway shows. 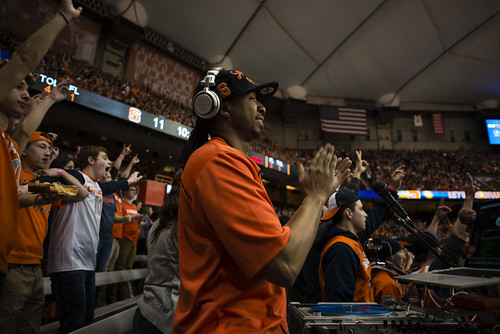 “One of the shows I remember that touched him a lot was ‘Serafina!’” Jane said. “He was in tears in the audience. Then the experiences he had in school brought out his love for music and dance even more.”

The proud mom couldn’t contain her excitement when reviewing the awards and achievements her son earned growing up. She said he has always been on the right track in terms of his education, and his entrepreneurial instinct comes naturally to him.