A dark stage and an expansive silhouette of the Statue of Liberty set the theme for the Summer Drama Festival’s production of “Ragtime,” presented by five area high schools. 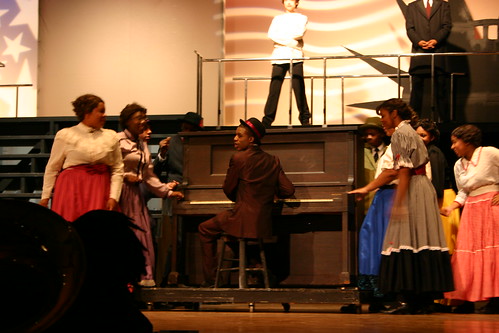 The audience is then introduced to a variety of characters of different races, classes and mentalities all living in Ragtime America. Eventually, their stories intertwine and create a melting pot of struggles leading into a new era.

When a WASP (White Anglo-Saxon Protestant,) Mother played by Lauren Brush, of Henninger High School, takes in a young black woman named Sarah, who is played by Destynee Raines, also of Henninger, and her child, she ignores racial tension and allows the young mother to restart her life. Both actresses succeed at portraying compassion and determination for the well-being of their families in their roles as mothers. 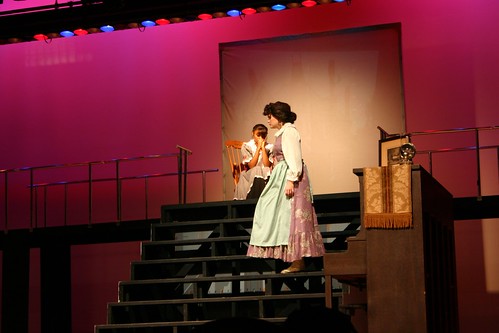 Artist Tateh, a Latvian Jewish immigrant, played by Daniel Fields, of Nottingham High School, and his young daughter played by Sasha Pourpezeshk, also of Nottingham, comes to the United States for a new beginning. He finds prosperity and promise in the filming industry after struggling to adapt to the American way of life. Fields’ interpretation of his character allows the audience to see clearly into the conflicts most immigrants face when trying to create a new life.

Well-known ragtime pianist Coalhouse Walker played by Rashad Williams, of Fowler High School, is Sarah’s husband and father of her child. He tracks down his wife and convinces her to journey with him into a new life of opportunities for their son to succeed. Williams plays his role lively and charismatic, just as the Ragtime musicians of the era.

The climax of the play begins when Sarah is killed fighting for her husband’s struggle against racial equality. The famous political activist Emma Goldman played by Gabrielle Gorman, of Nottingham High School, orator Booker T. Washington played by Anthony Wright, of Corcoran High School) and illusionist Harry Houdini played by Cameron Vaccaro, also of Corcoran offer insight and inspiration to the fictional characters with their own epic quotations.

By the end of the production, a new family is born: A WASP woman marries a Jewish immigrant, and together they raise both their own children as well as their adopted black child: Coalhouse Walker Jr., who is played by Jyierre Edwards, a first-grade student at Dr. King School. Edwards’ character runs across the stage in the final scene to join his new family.

For more photos from this event, visit our flick site.

— Photos and information provided by Greg Hipius; write up compiled by Sharisa Bufford