Students start with sewing basics and then go on to create projects such as pillows, handbags

Say Yes to Education recently started offering sewing classes to elementary school students on the South Side. Staffed by instructors from Peterson Sewing School, 920 Euclid Ave., the classes are for students at Elmwood Elementary and Roberts School. Students can enroll in a free, eight-week sewing class as part of their after-school program. 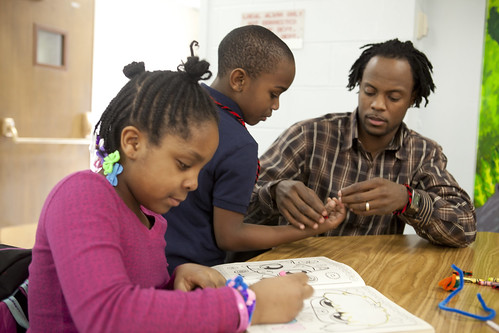 Due to the age of the students — second- and third-graders — sewing machines are not used at Elmwood, said Barbara Peterson, owner of Peterson Sewing School.

Ricky Parks, 27, a sewing/arts and crafts instructor at Elmwood, elaborated.

“In the beginning, we do nonsewing projects like making quilts, hats and scarves,” he said. “Then we get into the hand-sewing projects where we make pillows and handbags.”

At the start of the new eight-week session, students are learning the basics, Parks said.

“This week they practiced how to hand sew straight, using a plastic heart-shaped guide,” he said, as he helped a small group of students make necklaces and bracelets out of pipe cleaners on a Friday afternoon in March. 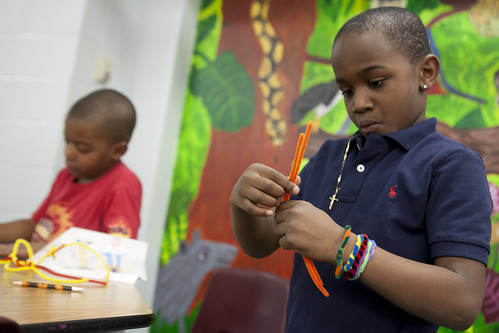 “I like the class because I sew with my grandma at home,” said 7-year-old Gabriel Tarbell, a second-grader at Elmwood.

“I never sewed before, and I wanted to learn about it,” said 8-year-old Jakiera Mitchell, a third-grader at Elmwood, while filling in her coloring book.

Parks, who grew up on the South Side, understands the importance of the after-school program. He hopes the students will learn leadership from the sewing class and see that their lives have many possibilities.

“A lot of them don’t have role models and father figures,” he said. “I can be that figure, that role model that they don’t have.”